She runs Bonnet’s Vino in a two mile five-furlong handicap hurdle at Ludlow today and she is having her first run for 90 days.

Bonnet’s Vino has shown reasonable form over her last couple of races with a second and third-place finish. She runs from the same mark here today and I am hoping that she can run to (or beyond) her mark coming back refreshed from a break.

Georgina Andrews takes the ride again and is able to put her three-pound claim to use.

Pam Sly doesn’t have too many runners but has had a winner recently and she does well when coming to Ludlow. Over the past five years, she’s had three winners, (37.5%) and four places (50%) from eight runners, for level stakes profits of 9.00 and 10.00 respectively and an Impact Value of 3.24.

Georgina Andrews also has a good record here at Ludlow. From her last ten runners, she’s had three winners (30%) and five places (50%), for level stakes profits of 7.75 and 8.53 respectively and an Impact Value of 2.59.

When looking at the Instant Expert report we can see that Bonnet’s Vino is reasonably well suited to conditions in this race. She has three sections of green and one of amber and is also just the two pounds higher than for her last victory.

A couple of other runners also look good on this report, with Monbeg Theatre and Galactic Power both having at least three sections of green.

The Pace report shows that early leaders here over this distance have the best record, with 14.29% of them going on to win the race, for a level stakes profit of 18.00 and an Impact Value of 1.32.

Bonnet’s Vino is usually held onto and waited with, but there doesn’t appear to be a lot of pace in this race so there is the possibility of it being falsely run. 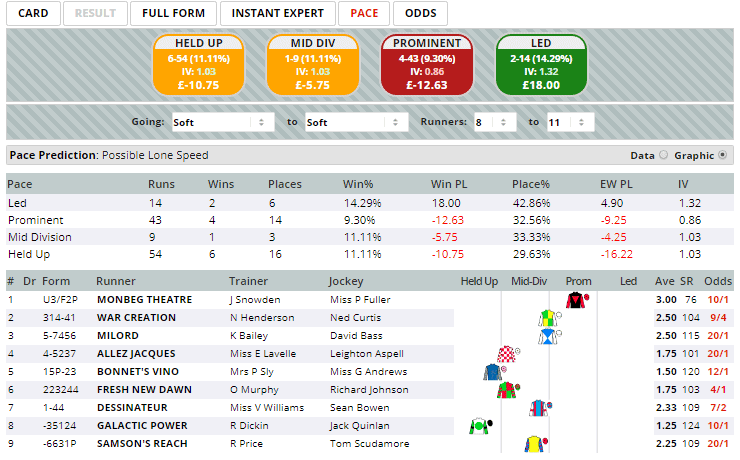 Stat of the Day, 21st February 2018 The Betting Mastermind Review
Scroll to top