He runs Frozen Lake at Chelmsford today who was a winner just over a week ago at Kempton.

Frozen Lake had not been in good form prior to his win last time out, however, he had dropped to a decent mark and ran well over seven furlongs at Kempton.

He steps up to a mile, and although never having won over this distance, his one race here at Chelmsford at this distance he kept on well after being awkward leaving the stalls, so will hopefully have no problems lasting the trip.

He has been raised six pounds for that win last time out, but has claimer Ben Robinson on board today and he is able to take five off, which is very handy.

The sire of Frozen Lake, Elusive Quality, has a strike rate that is over 3% above his overall record with runners on the all-weather courses.

The Instant Expert report shows just one section of green for the entire field, suggesting that this race may not take a lot of winning due to them not necessarily being that well suited to today’s conditions.

When looking at the Pace report we can see that runners that are in mid-division have comfortably the best record, with 27.27% of them going on to win the race for a level stakes profit of 24.00 and an Impact Value of 1.66.

Frozen Lake tracked the leaders last time out and this race looks at though it could be cagey affair with no obvious pace in the race and may well be falsely run (as suggested on the report). 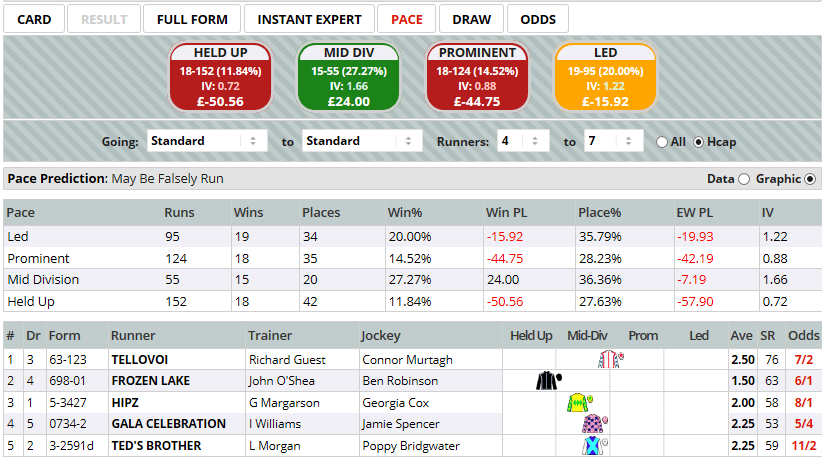