The Trainer Jockey Combo Stats report shows that Colin Tizzard and Harry Cobden have been in excellent form together recently. Over the past 30 days, they’ve had five winners (29.41%) and seven places (41.18%) from 17 runners, producing level stakes profits of 9.23 and 6.55 respectively and an Impact Value of 2.41.

They team up with three at Fontwell today and it’s Golden Sunrise in the first that I will be taking a closer look at, who is currently priced around 11/4.

Golden Sunrise was a winner last time out in testing conditions at Exeter, where he stayed on well over 19 furlongs to land the spoils that day.

The extra two furlongs here today look likely to suit and in what appears to be a tough race to call with a few useful looking novices in, I think he stands a reasonable chance.

There isn’t enough data on the Pace report to draw meaningful conclusions on the benefits of the relevant running styles.

What does seem likely though is that Boreham Bill will be taking them along through the early part of the race. He made all last time out to win at Southwell, however, that was a slow-paced race so it will be interesting to see if he tries to keep the pace down again today. 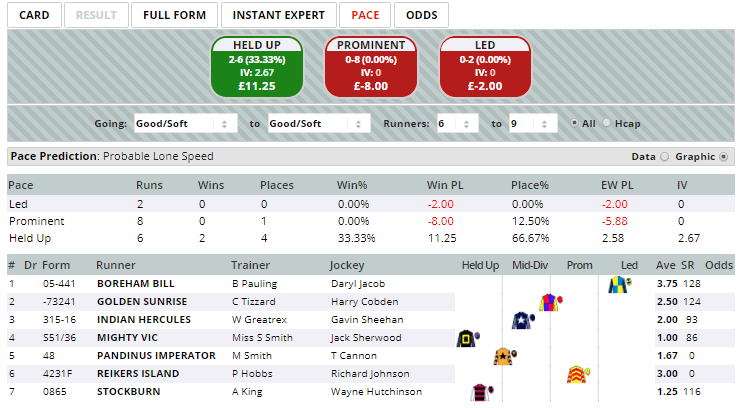