Jack The Truth makes in on to The Shortlist at Southwell today in a five-furlong dash on the all-weather. He has a good score of 11, with four sections of green and one of red.

He looks well suited to today’s conditions in a race that has an open feel to it.

Jack The Truth was a good winner at Chelmsford last time out and this four-year-old has three wins from six races in his career so far, two over five furlongs and one over six.

He has raced three times here at Southwell previously and the one race over course and distance saw him run out a ready winner by four lengths. He has been raised a further four pounds for his latest win but a mark of 77 doesn’t look insurmountable with the form his has been showing.

The Instant Expert report highlights the good showing of Jack The Trust and he looks comfortably the best suited to this race. It confirms that he is four pounds higher than for his last win but there are three others that have more to find than him.

The Pace report shows that early leaders here over this distance have a good record, with 16.67%) of them going on to win the race, for a level stakes profit of 30.61 and an Impact Value of 1.42.

Jack The Truth is usually quickly away and two of his three wins have come when making all. If he can get away well again then I would expect the same tactics from Fran Berry and am hopeful he will be strong enough to hold on. 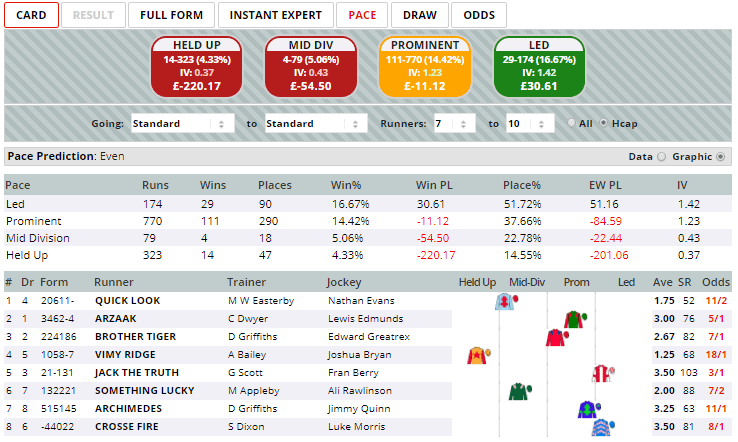