The Trainer Jockey Combo Stats report shows that Mark Johnston and Joe Fanning have a good record together at Newcastle. Over the past year, they’ve had five winners (16.67%) and ten places (33.33%) from 30 runners, for level stakes profits of 33.33 and 34.04 respectively and an Impact Value of 1.56.

They have two runners at Newcastle today and I am going to be taking a look at Prestbury Park, who runs in a six-furlong handicap.

This winter was the first time that the three-year-old Prestbury Park was raced on an artificial surface, and he ran well last time out at Newcastle before tiring late on after setting a blistering pace. He runs from the same mark today in a slightly lower class of handicap, therefore, if the race is paced slightly better then I think he has a chance at a current price of around 9/2.

Johnston has a reasonable overall record here at Newcastle for the past year. He has managed to have ten winners (12.35%) from 81 runners, for a level stakes profit of 5.64 and an Impact Value of 1.16.

His strike rate remains pretty much the same over the past five years from a total of 263 runners.

From looking at the Instant Expert report we can see that Prestbury Park is well suited to today’s conditions, having three sections of green and a blank having never raced here at Newcastle before.

Lord Of The Glen is the only other runner in the race with three sections of green, but he is seven pounds higher than for his last win.

The Pace report shows that early leaders here over this distance have the best record, with 21.88% of them going on to win the race, for a level stakes profit of 10.38 and an Impact Value of 1.70.

Prestbury Park is a confirmed front-runner and is usually quickly away from the stalls. He doesn’t have a great draw in stall one but as there are just the seven runners I am hoping it doesn’t inconvenience him too much. 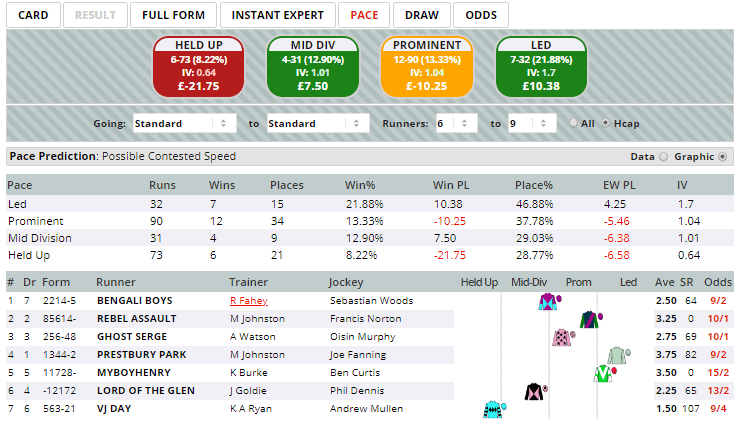