Theatrical Star is on The Shortlist today for the marathon handicap chase at Taunton, with a useful score of 13, having four sections of green and one of amber.

He clearly looks well suited to today’s conditions and I am hoping he puts in a good run in what looks a competitive race.

Theatrical Star has been running consistently and was a good second over course and distance last time out in heavy conditions. That looks like it was a stronger handicap than today and with conditions unlikely to be as testing as a couple of weeks ago, another bold showing is expected.

Richard Johnson takes over the ride on the twelve-year-old today.

The Trainer Snippets report shows that he also does well with his runners over the marathon distances.

The Instant Expert report highlights the good showing of Theatrical Star and he looks much better suited to this rest than the rest of his rivals. It is also interesting to note that he is a full nine pounds lower than for his last victory, so if a return to optimum conditions can bring the best out in him, I think he has a great chance at a current price of around 11/2.

From looking at the Pace report it appears likely that the early lead will be between Theatrical Star and Muffins For Tea, the other Tizzard runner. It wouldn’t surprise me to see Johnson head straight to the front and try to dictate the race from there. 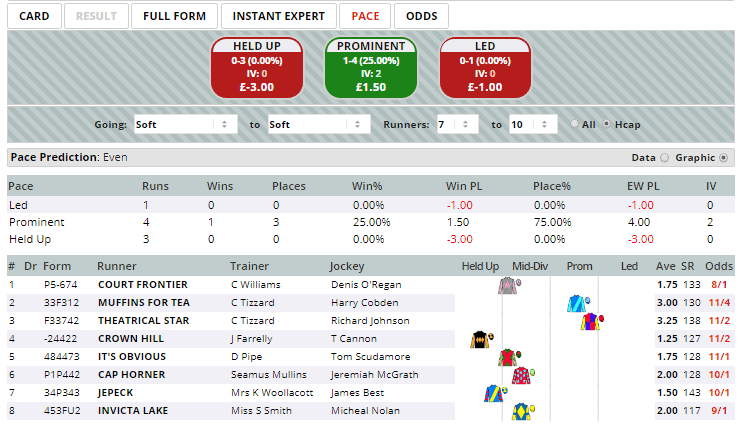