Darcy Ward was sired by Doctor Dino and runs at Wincanton today in a novices’ hurdle.

Darcy Ward was a good winner last time out at Taunton in a novices’ hurdle over 19 furlongs, where he was strong at the finish, suggesting that the further two furlongs he’s racing over today will bring out further improvement in him.

The second place horse in that race at Taunton has come out and won since, giving the form a solid look.

Jack Barber doesn’t have too many runners, but he has found a couple of winners during the past month. In that time he’s had two winners and places (40%) from five runners, for level stakes profits of 5.00 and 3.90 respectively and an Impact Value of 3.31.

When looking at the Instant Expert report it is Captain Cattistock that really stands out, having a nice full line of green. He does have to carry at least six pounds more than any other runner so could still be vulnerable.

Darcy Ward has three sections of green which is the next best on offer.

The Pace report shows that horses that are held up here over this distance have the best record, with 18.92% of them going on to win the race, for a level stakes profit of 11.00 and an Impact Value of 1.42.

Scholfield waited with Darcy Ward last time and I would expect him to do the same again today, with the top weight Captain Cattistock looking the most likely early leader. 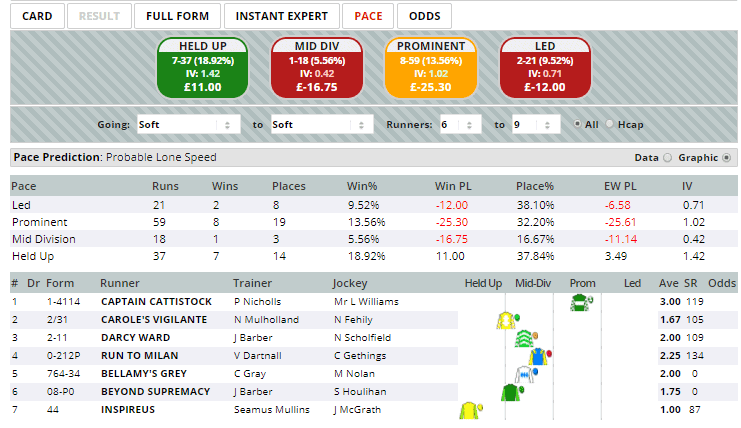