The Trainer Snippets report shows that Charlie Fellowes has an excellent record with last time out winners. With his last 50 such runners, he’s had 17 winners (34%) and 25 places (50%), which have produced level stakes profits of 16.18 and 8.87 respectively and an Impact Value of 1.80.

Vice Marshall was a winner last time out in February and goes in a one-mile handicap at Kempton today.

It was at Lingfield that Vice Marshall got his head in front last time out and he has since been raised six pounds in the handicap for that win. I am hoping that now he has managed to get his head in front he will go on to better things and keep improving, which would still give him a chance from this mark

It doesn’t appear to be a race with any real depth when looking at the Instant Expert report, as there are few sections of green.

Vice Marshall does have three sections of green and one of amber, showing that he is reasonably well suited to today’s conditions. As mentioned above, he is also six pounds higher than his last winning mark.

The Pace report shows that early leaders here over this distance have the best record, with 10.40% of them going on to win the race.

There doesn’t appear to be a great deal of pace in this race with no real obvious front-runner, meaning there is a chance of a falsely run race.

Vice Marshall is usually quite prominent in his races so it may that Doyle heads to the front and dictates the pace himself. 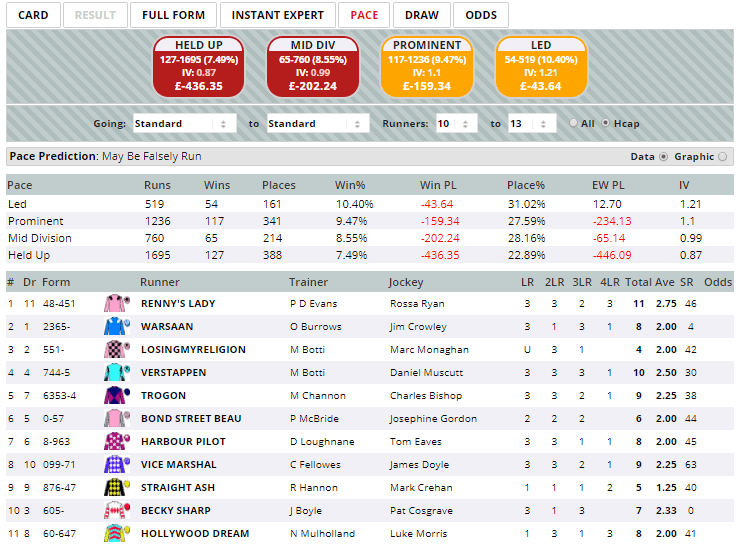 Stat of the Day, 4th April 2018 Irish Jump Racing: Do We Have A Problem?
Scroll to top