Great Return makes in on to The Shortlist with a good looking score of 13, having four sections of green and one of amber.

This New Approach gelding is chasing a four-timer in this two-mile handicap on the all;-weather at Wolverhampton.

Two of the last three wins for Great Return have come here at Wolverhampton, with the first of them being over a similar distance today and saw him trounce the field. He has been given quite a hike in the weights off the back of those three wins, but is clearly in superb form and looks good enough to defy his latest six pounds rise in the handicap.

Warren Greatrex obviously doesn’t have too many runners here at Wolverhampton but has a good record when he does send one here. Over the past five years, he’s had three winners and places (50%) from six runners, for level stakes profits of 4.25 and 3.06 respectively and an Impact Value of 4.46.

The Instant Expert report highlights the excellent showing of Great Return in these conditons and also confirms what was mentioned earlier about him being six pounds higher than for his last victory.

Sheriff Garrett has two sections of green and is actually two from two here at Wolverhampton, so may be able to pose a threat. He is a whopping ten pounds higher than for his last win so will need to show something extra to land this.

The Pace report shows that horses that are held up here over this distance have the best record, with 15.07% of them going on to win the race, for a level stakes profit of 4.88 and an Impact Value of 4.88.

Great Return has been held towards the rear of the field in each of his last three races (all of which he won), therefore, I would expect Greatrex to do exactly the same here today and look to pick them off late on. 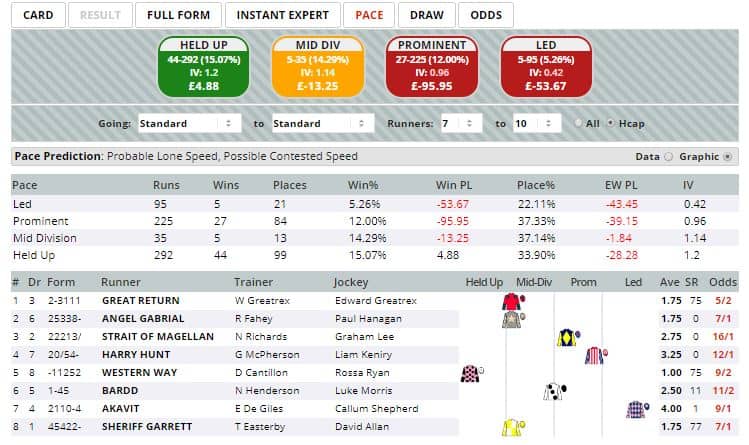