The Trainer Jockey Combo Stats report shows that Neil Mulholland and Liam Keniry have a great long-term record together at Wolverhampton. Over the past five years, they’ve had eight winners (20%) and 18 places (45%) from 40 runners, for level stakes profits of 37.25 and 44.54 respectively and an Impact Value of 1.78.

They team up with just the one runner at Wolverhampton tonight, as Chantecler goes in a one mile and six-furlong handicap.

Chantecler has been running consistently without being able to get his head in front. He’s had two second and two third places from his last six races, however, these were all hurdle races and now he reverts to the flat where he has won in the past.

He is 12 pounds higher in the weights than for that win but he did run respectably from today’s mark here last year, and the extra two furlongs in today’s race look sure to suit.

Neil Mulholland has a great record at this course and it has been particularly strong over the past year. From 25 runners during that time, he’s had six winners (24%) and eight places (32%), for level stakes profits of 19.63 and 11.94 respectively and an Impact Value of 2.21.

When looking at the Instant Expert report we can see that Chantecler isn’t hugely suited to today’s conditions, but he does have one section of green and two of amber.

Majrooh looks the best suited on this report with three sections of green and one of amber.

The Pace report shows that horses that are held up here over this distance have the best record, with 10.84% of them going on to win the race, for a level stakes profit of 7.82 and an Impact Value of 7.82.

Chantecler is usually held towards the rear of the field but it will be interesting to see if different tactics are employed now on the flat. I would imagine Keniry will try and make this as much of a stamina test as possible, given that he has form over further. 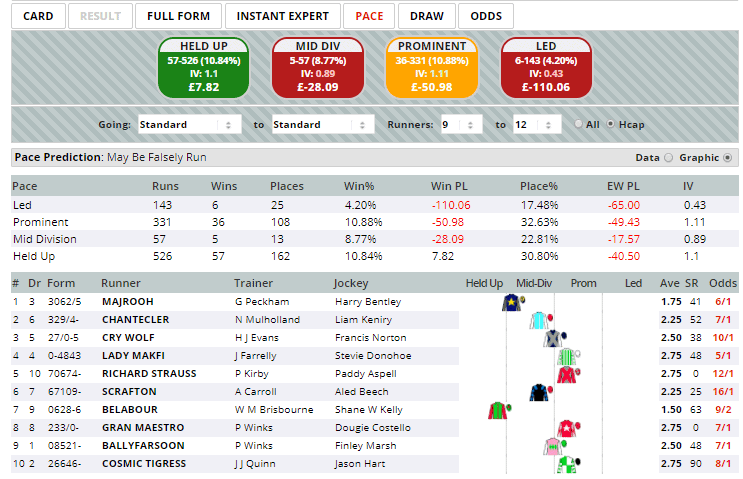