[I originally wrote this post for last year’s race and, while missing out on the Grand National winner, it did flag placed horses at 80/1 and 40/1. So the below is a slightly amended version adding into the mix what we learned twelve months ago. A version 2.018 if you will…]

It’s the greatest race in the world, or so they’d have us believe. But, since the modifications, the Grand National has become a deeply unpredictable lottery, and far from a sensible punting conveyance.

Fine for a bit of a laugh, and an interest, but nothing more. Which is a shame because, in the good old days – you know, like eight or ten years ago – it was actually a pretty solid trends race.

It used to be the case that winners had won over three miles-plus, had proven jumping ability, had won in big fields, and had a touch of class. Oh, and they’d lug less than eleven stone.

While last year’s race was won by a horse – One For Arthur – that was strangely ‘gettable’, 2016’s winner had NEVER finished in front in a steeplechase… And in 2015, a horse a pound off top weight won. The year before, a horse that won a veterans’ chase on it previous chase start prevailed. The year before that, the 66/1 winner had chase form of U0P45F5 coming into the race.

The average winning SP of the last six winners has been 32.5/1 – and that’s after the bookies have squeezed the fleshies of the price of just about every horse in the hours running up to the start!

Let’s face facts: this is machismo betting; it’s vanity punting. The only reason to bet in the Grand National these days is to say, “I had the winner of the Grand National”. Better to be lucky than good, right?

Seven of the last eleven winners paid 25/1 or bigger at starting price, and 17 of the 44 placed horses (including winners) did likewise. So if you really want to get macho about betting the Nash, exclude all the fancied runners and take four against the field.

Horses aged nine, ten or eleven have won 17 of the last 20 renewals. That’s 85% of the winners from two-thirds of the runners, and they’ve had 75% of the places too.

[2.018 Update: Two of the exceptions, including last year’s winner, were eight. The fourth horse last year was also eight, suggesting that the reduced stamina and jumping test is paving the way for younger horses to further press their claims. So we’ll revise this to be horses aged eight to eleven.

Lob out any runner rated north of 148 – yes, it’s arbitrary (albeit based on the fact that only one 9-11yo managed to win from higher) but I don’t care; this is the daftest betting race of the year after all!

And if you throw in a horse that finished in the top five last time out, you get a system that has found three of the last four winners, and the second-placed horse in the other year. [2.018 Update: no change here, this is still a surprisingly good way to whittle the field with the top seven in 2017 fitting the bill, where 13 runners did not.]

Here’s how this played out over the last decade:

There’s absolutely no doubt in my mind that the entire complexion of the race has changed since the modifications to the fences. And look at the results since then. It’s a tiny sample size and perhaps just coincidence than anything more scientific… but it’s not definitely coincidence.

During this time, two other things have happened as well: the race is a little bit shorter, and the handicapper has been given discretionary power when it comes to weighting the runners. It is plausible that the latter of those two factors has led to more lenient handicapping of older, seemingly thoroughly exposed, horses. And it is likely that the former has enhanced the prospects of younger, less physically mature types.

At this stage of proceedings, there are a few horses that could qualify, as follows (along with their current top price):

Removing those too short in the betting and the reserves leaves just seven possibles.

Trying to work out which will start at 25/1 or bigger is something best left to the minutes before the race, but it makes sense to try to steal a march on those which are more likely to go off big prices but are currently very big prices… if you see what I mean. (Let’s face it, nothing about betting in this race makes sense, from a financial advice perspective at least, so we might as well have a bit of fun with it).

Warriors Tale, Regal Encore, Vieux Lion Rouge, Houblon Des Obeaux and Milansbar look to be the five with a good chance of going off 25/1+. So maybe split your stake between them and see how you go.

If betting each way, note that a number of firms are paying SIX places but they are all a fifth the odds the place). bet365 are my preferred option: see why at the bottom of this post. While they are only paying five places, they are a quarter the odds a place, and both non-runner no bet and Best Odds Guaranteed; but they’ve also got a huge money back offer for EXISTING customers.

The going is a bit of a guessing game at this stage, but probably between soft and good to soft, so I’ve sorted the field by that prospect – also changed distance range to 3m to 4m4f – on this place view of Instant Expert: 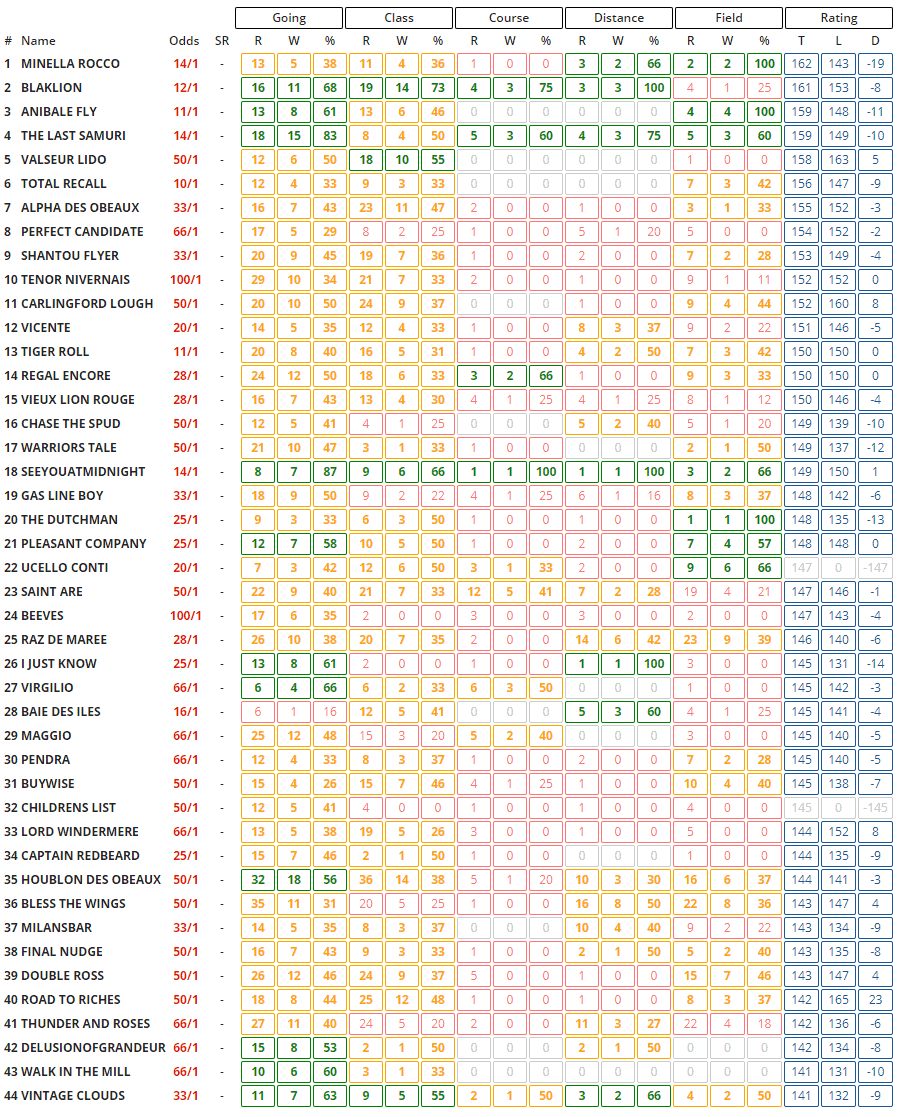 And the pace map for the early stages suggests a running order somewhat akin to the following: 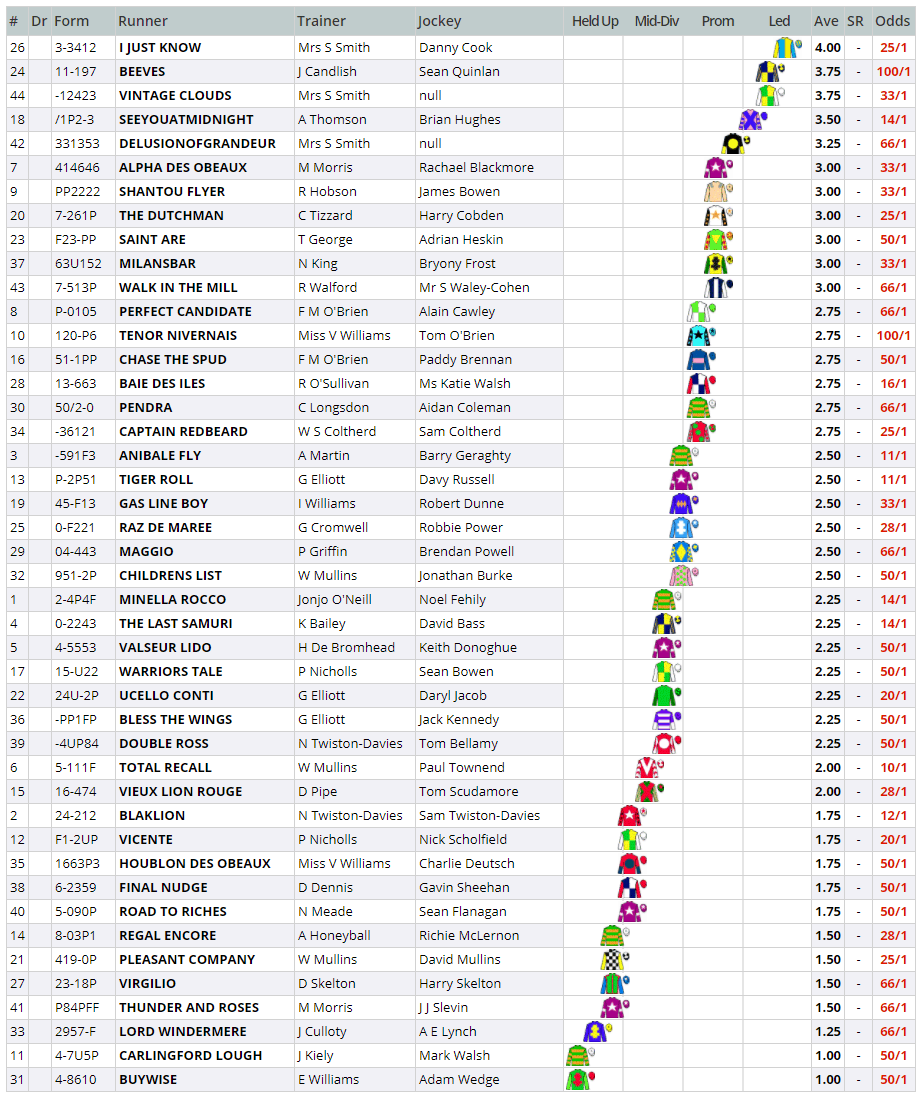 Looking at the shortlist from a soft or good to soft ground/prominent racer perspective may slightly elevate the prospects of 25/1 I Just Know, 33/1 Vintage Clouds in case he sneaks in (money back if he doesn’t), 50/1 Warriors Tale, and 33/1 Milansbar. So, if you were mad enough to want my tuppence worth on the world’s most unfathomable horse race, there it is. I will be having token interests on that quartet, all at nice big prices, I’m already on Regal Encore (sentiment) and may have a crack at 33/1 Vieux Lion Rouge as the only other possible qualifier. I’m happier backing losers at nice big prices than at shorter… 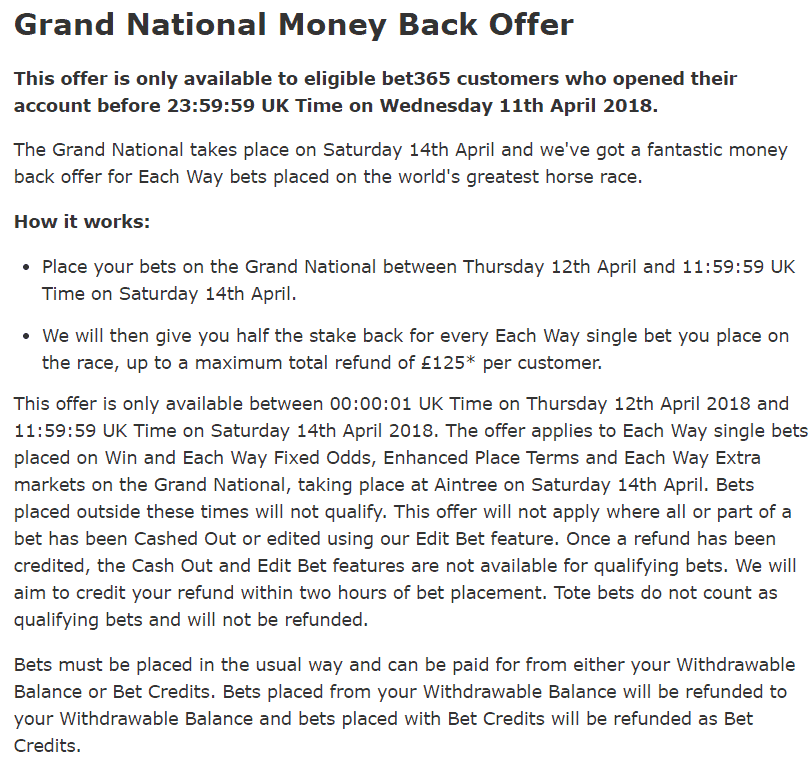