He has two runners over the shorter distances at Kelso today and I am going to be taking a closer look at John Williams, who runs in a two miles and one-furlong handicap chase.

The form of John Williams has been good, with two wins and two second places in his last six races. He has risen up the handicap as a result of this but ran well at Musselburgh last time out in a better race than this one, and the drop back down in trip looks likely to help.

His two wins at the back end of last year both came over two miles on good and heavy ground, therefore, this race here today looks nicely suited to him.

The Instant Expert report shows that John Williams isn’t that well suited to today’s race, with just the two sections of amber when on the ‘Place’ setting. He is also seven pounds higher than for his last victory so will need to keep his good form going and take another step forward to take this.

There is not enough data on the Pace report to draw any worthwhile conclusions from, however, it does show that John Williams is likely to be among the early pacesetters based on the last four runs of each of today’s field.

I imagine that McDonald may want to try and make this a test of stamina, given that John Williams has been competitive over much further than this. 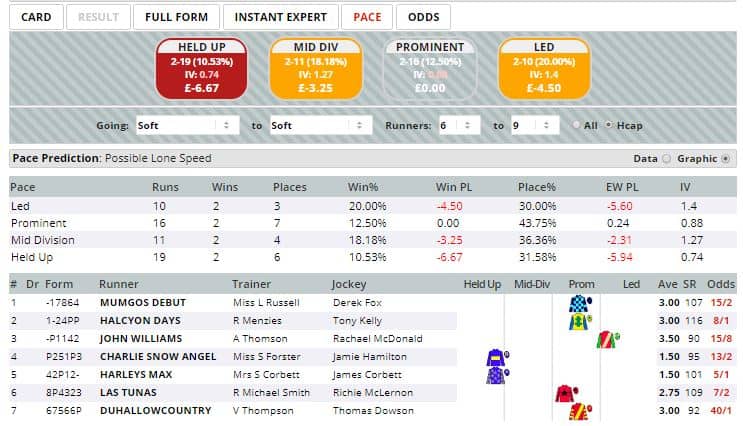