The Shortlist is the report that is available to all registered users on a Tuesday, and Lord Clenaghcastle makes it on to there today in a one-mile handicap at Brighton. He has a good score of 13, having four sections of green and one of amber, showing that he is well suited to conditions in this one.

There are just the seven runners, but it looks an open contest and Lord Clenaghcastle is currently priced around 8/1.

His last two runs have been below par, however, prior to that, he was in excellent form with two wins and two second places. One of those wins was over course and distance and he races from just three pounds higher today.

The Instant Expert report highlights how well suited Lord Clenaghcastle is to today’s conditions. He has five sections of green on the ‘Place’ setting and has been placed in all four outings at this course. As mentioned earlier, he is also just the three pounds higher than for his last victory.

Black Caeser is the only other runner with more than one section of green and is also extremely consistent here at Brighton.

The Pace report shows that early leaders have the best record here over this distance, with 16.13% of them going on to win the race.

There appears to be quite a bit of pace in this race and it looks as if it will likely be a truly run mile. Lord Clenaghcastle has won over nine furlongs so won’t mind this as he will have the stamina to see it out. 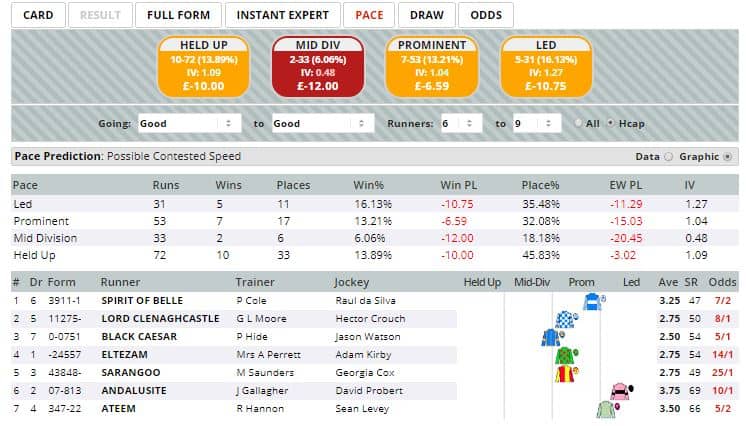