Geegeez has several horses, actually. Somewhat perversely, for a post written in early July, none of them are out and out flat horses, with one possible exception. One of our horses runs today, and I have a couple of remaining shares in two others, as you’ll see below.

I source the horses, then syndicate them between geegeez readers, myself and existing owners at the yards in which they are stabled. The 2018/19 team looks like this: 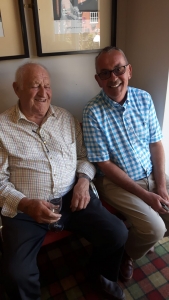 Wilf is a wily veteran who has a Cheltenham Festival victory to his name back in the day: a couple of hours after Collier Bay got the better of Alderbrook in the 1996 Champion Hurdle, Wilf’s Great Easeby bagged the lucky last, the Goldcard Handicap Hurdle, at odds of 7/1.

Nowadays, Wilf doesn’t train jumpers, though we are taking NEARLY THERE to Perth for a National Hunt Flat race this afternoon. This chap was third on his debut a couple of months ago, which was a remarkable effort considering:

We’re hopeful – we’re almost always hopeful! – of a decent run, but you never know what you’re up against in these type of races.

We also have a two-year-old with Wilf, who we’re going to call SOMEWHAT SISYPHEAN, after the nature of racehorse ownership which can sometimes feel like pushing a boulder up a hill only for it to roll down again when you get close to the summit! Anyway, this lad is out of the mare, Nine Red, with whom we’ve had success in the past: she produced both Nonagon and Table Manners to win multiple races each for us.

SS is a VERY big lad – he works with the ten-year-old Jan Smuts (six length winner yesterday, at 10/1) and is the same size – and naturally enough he’s taking time to fill out that vast frame. But he’s a really nice mover and we’re hopeful he’ll progress into a nice horse. There’s no rush with him and no planned racecourse debut. [In the video below, SS is NEAR side, not far side; yesterday’s winner, Jan Smuts, is far side].

Wilf trains out of Muggleswick in County Durham, and is a regular on the northern circuit.

From the ‘been there, done that’ of Wilf to the ‘new kid on the block’, Olly Murphy. Olly had, quite simply, a ridiculous start to his training career, notching 66 winners in his first year. Indeed, yesterday marked a year since his first runner – and winner – Dove Mountain at Brighton.

We had two juvenile hurdlers with him last jumps season, and both are likely to mix codes when they come back into training in a few weeks’ time.

OXFORD BLU gave us some superb days out. He won his hurdling debut for us by fully twenty lengths, before going on to run at the Cheltenham Festival in March. That was a dream come true for a number of his owners, including me, and we probably persisted when he was over the top after that. Still he’s put on some weight out in the field and should come back a healthy happy horse ready to go to war again in 2018/19 season.

He’d actually been on the go for a good while before we got him, winning for Sir Mark Prescott, and has fully deserved his rest. Rated 68 on the flat, that looks an exploitable mark so we may well target a staying handicap (or two) before reverting to timber-topping.

Likewise, SWAFFHAM BULBECK could be well handicapped on the flat. He left Ed Vaughan’s yard last October with a rating of 68 after just five flat runs, including a win in a heavy ground maiden. A well run staying handicap on wet ground looks bang up his street, and if we can find that race for him he should go mighty close in 0-70 company.

But it is for hurdles that we acquired him, and over hurdles that we are excited to see more of him. Having run a fine second on his first start, splitting subsequent winners Mister Chow (rated 132) and Night Of Glory (rated 122), we raised our sights to the Victor Leudorum Hurdle at Haydock next time. He got stuck in the horribly gluey turf that day – Mister Chow behind – before running a good second to a horse called Return Ticket at Ayr on much quicker ground. The feeling is that we bumped into one there, and we have a very fresh horse to work with this season; the fact he failed to win last term, second in good company twice, means he starts out a novice, which is a very handy bonus.

Olly’s stables are at Wilmcote, near Stratford-upon-Avon.

A different type of trainer again is Anthony Honeyball. Based in Mosterton, on the Dorset/Somerset border, Anthony is establishing himself as a very high class handler with a searingly keen eye for a ‘store’, or unraced, horse.

His record in National Hunt Flat races, bumpers, is exceptional: he’s won 47 of 227 since 2009 (20.7% win rate), and shows a level stakes profit for both win and each way betting. That’s no more than a bonus for us syndicateers, but it’s a happy bonus on top of the winning chances our lads and lasses have.

Anthony trained the The Geegeez Geegee to win his bumper and, more recently, we had a very smart mare called My Dance, who was on a hat-trick and due to run in a Grade 2 at Sandown when she sadly suffered a career-ending injury. Anthony won that Grade 2 with his substitute runner. I recently acquired a replacement for My Dance, with a very attractive pedigree, details of which are below.

Geegeez sponsors the Honeyball yard, and we also have four horses ready to get cracking in the coming months. Three of them are unraced, as follows:

– AMINUTETOMIDNIGHT – AMTM for short. By Malinas, he’s out of a mare called Eleven Fiftynine who won the Listed Mares’ Bumper at Aintree’s Grand National meeting in 2012. He’s put on plenty of pounds over the summer – a good sign – and will be starting his weight loss programme in mid-July. Having bought the now three-year-old as a yearling, I’m really excited to see how he goes when he hits the track around November time.

– COQUELICOT – I bought this classy daughter of Soldier Of Fortune as a yearling at the Arqana sale last November and she’s been a yard favourite since she arrived. Her mum, Moscow Nights, also bore Heartbreak City, who won a valuable Galway handicap hurdle, as well as more notably the Ebor, Europe’s richest handicap, before running a valiant but agonising head second in the Melbourne Cup. That one ended up with career earnings of £700,000! Cookie will be aimed at a couple of back end maidens this year, then will run in flat handicaps next year before going hurdling, the game for which she was acquired. She’s an exciting prospect indeed.

– UNNAMED 3YO GETAWAY FILLY – Anthony went to see this filly in late May and thought she was all quality. She’s by Getaway, an up and coming stallion with the likes of Getabird and Verdana Blue on his CV, and most of his young stock making big money through the sales rings this year so far. This filly is out of a mare called Chicago Vic. Chicago Vic won six races, and was placed no fewer than eight times in Pattern (Listed or Graded) class, so brings plenty of class to the page.

In the short time Anthony has had her, she’s gone from not being sat on to gentle canters up the gallops and her first encounters with poles and hurdles in the indoor school – see below, only her second day in jumping school.

She’s due to be turned out for a month any day now, and will be ready to come back into training in mid-August with a view to running in a couple of juvenile fillies’ bumpers and, if good enough, the Listed Juvenile Bumper at Cheltenham on New Year’s Day. I still have three shares available in her, do contact me if you’re interested.

– MYSTICAL KNIGHT – A completely different proposition, Mystical Knight was purchased relatively cheaply at the Ascot sales last month, with a view to going handicap chasing next season. He was previously with Rebecca Curtis and has dropped from a rating of 140 to one of 120 in just a few runs. That, of course, is because he didn’t generally run very well; but we believe Anthony can freshen him up and, if we’re right, we have a very well handicapped horse with which to approach next season.

He does have a couple of war wounds which we’ll need to protect so any reader interested in one of the two remaining shares should be aware that this might be a short-term project (a year is the initial agreement period). As I say, two shares remain in him, please email me if interested.

That then is the geegeez.co.uk syndicate squad as it stands. Further details can be found on the syndicates page here, or by emailing me with any questions you might have. I’m keen to fill these last few places in the next fortnight or so, so please do let me know if you’re interested.

I take no fees for running the syndicates, so these really are cracking value opportunities. Obviously, all syndicate members get access to the training yard, owners’ access at the racetrack on race days, regular communications via email and whatsapp, and, of course, a proportionate share of all prize money. There’s still time to join us for what’s going to be a really exciting season!