It’s started already, I know, and it’s not on topic, I know… but it has become customary for me to share my season bets on these pages, for better or worse.

Two seasons ago, we ‘got the lot’ as a perm trixie landed all four elements (one relegation from Prem, one promotion from Championship, two promotion from League Two). Last season, we got nothing; a pretty poor start and the selected teams – Watford in the Prem for relegation, Boro for promotion from the Championship – never really threatened to do as wagered.

My team to be relegated from the Premiership is Huddersfield at 5/4. They started last season on fire which gave them enough of a head start to survive in 16th place. Not comfortable then, but certainly sufficient. This market is always about how you view the promoted sides, all three of which stayed up last term, and my take is that Cardiff will probably go back down but both Fulham and Wolves have enough about them to beat the drop.

Thus we’re playing for two spots. While Watford, who have started well, may again be flirting with danger, and Burnley – if they get into the Europa League proper – will have a lot of games for a small squad, and Southampton’s defensive frailties are likely to be exposed by Mark Hughes’ inept and gung-ho style of ‘management’, and of course Bournemouth’s similar trait for conceding poor goals, means it is an open enough race… I feel Udders may not have done enough recruitment-wise to freshen up what was a relegation squad in the second half of last season (15 points from 19 games, only Stoke’s 14 mainly under the lamentable Hughes was poorer).

Huddersfield got whacked 3-0 on the opening day by Chelsea but, as coach Wagner correctly said afterwards, those are not the games they have to win. Nevertheless it was hardly a confidence booster going into Sunday’s match away at… Manchester City! Oof. Of course, it gets easier thereafter, with home games against Cardiff and Crystal Palace before the end of September. Those will already be circled as ‘must win’ fixtures because with home games against Spurs and Liverpool as well as four more away fixtures comprising their opening ten Premier League games to the end of October, the die may already be cast by the end of that period.

In League One, I’ve pushed on an open door, hoping it doesn’t lead to a haunted house. True, Sunderland at 19/20 have many skeletons in their closet, and the ghosts of past failures remain; but they’ve moved on most of the blood- (or cash-)sucking Carlos Kickabouts and have a young, hungry – and talented – squad under a similarly described manager in Jack Ross.

An early exit from the Carabao Cup last night supplemented a win and a draw in their opening league fixtures, in what has been a pretty moderate beginning. Of course, the fact they’ve taken four points from six while not playing well and while the team is meshing together is a positive: they will improve, and have a home game against Scunthorpe, whose record is exactly the same thus far, to get to seven from nine.

It’s an uninspiring choice, I grant you, but they look sure to be thereabouts come the end of the season and, if needing personnel to finish the job, will have their pick of the loan options in January. In spite of the price, I happen to think they offer a sliver of value.

Down to League Two where my two against the field are Lincoln City and Notts County, both at 2/1 for promotion. The key to League Two promotion betting is that there are three automatic spots, therefore playoff positions go down to seventh place. So, ideally, we’re looking for both City and County to get into the top three, but there’s a fairly broad safety net in that playoff quartet.

The case for Lincoln is easy enough to make: they were miles the best in the Conference two seasons back, and nearly did the double jump before being found out by a very good Exeter side in the playoffs last campaign. Since then, they’ve added more firepower in John Akinde and are blitzing teams just now. A good 1-0 away win at Northampton on the opening day has been followed by a 4-1 thumping of Swindon and a 4-0 away win at Port Vale in the Carablahblah Cup. True, I’d have preferred them to have gone out of that competition, but with fresh legs at this stage of the season, confidence will be stratospheric just now. Away to Grimsby is the next assignment in what is something of a local derby.

Notts County were a bit of a wise guy pick this season, my mate Gazza being one of the wiser guys and having invested accordingly. I admit that I largely followed him in blindly. They’ve started poorly – a draw and a loss – but nobody is pressing the panic button yet. They play Yeovil tonight where a focus on improving defensively is the obvious route to a better result, having conceded three against both Cambridge and Middlesbrough in their last two games.

p.s. what are your long-term footy season bets? Leave a comment and let us know… 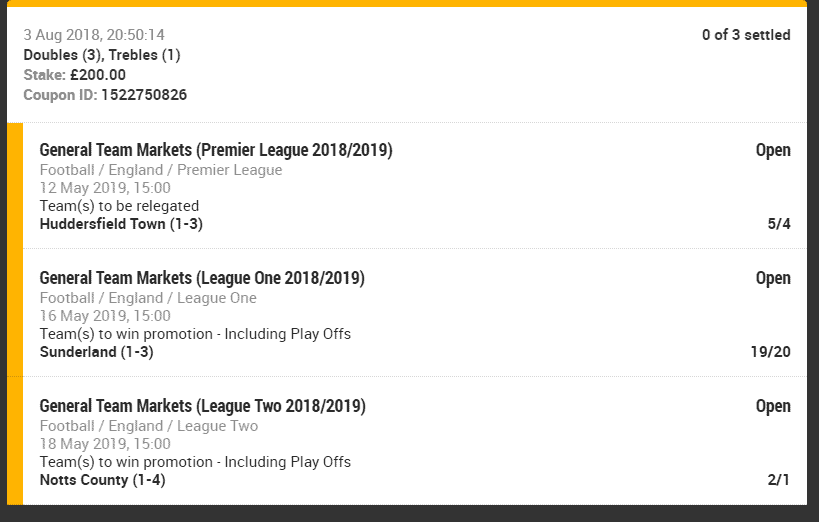 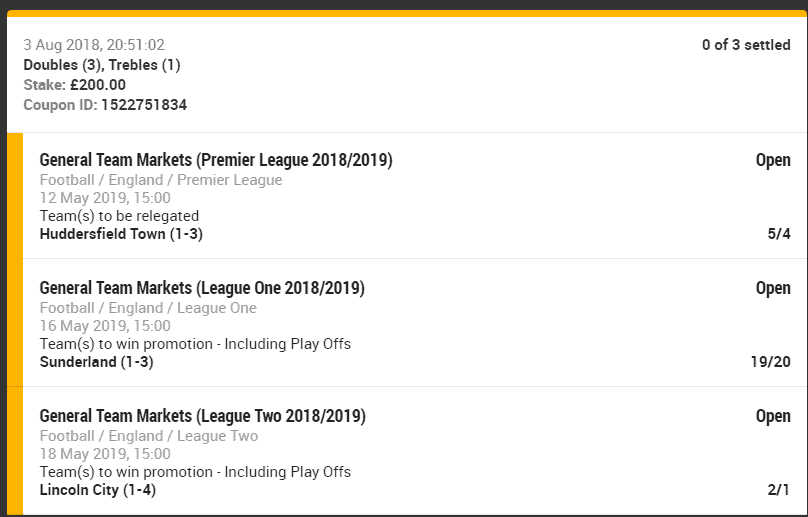