Just before Christmas, a pal got in touch to say he had bought a national hunt filly to go into training and was wondering if I had any stats on trainers that do well with jumping fillies and mares, writes Tony Keenan. My first thought was that he must really be stuck for another opinion and the second was that Willie Mullins completely bosses this scene; he agreed on both counts but said that he was inclined to go to a smaller yard than Closutton.

One can certainly see why someone would want to have a national hunt filly or mare in the current climate. There has been not so much an expansion as an explosion in the race programme in Ireland for these horses in the last few years; in the noughties, there were typically 10 Listed or Graded races a season for fillies and mares but the number is more than double that now. It tracked up to 13 between the 2010/11 and 2014/15 season but has since jumped to 16 in 2015/16, 19 in 16/17 and 23 last season. These Graded races are supported by a series of mares-only handicaps, too, with one being held next Sunday at the Dublin Racing Festival.

These enhancements have been driven by Horse Racing Ireland with a few obvious aims: more and better mares in training, chiefly, which in turn suits breeders as it drives demand for fillies at the sales with programmes like the ITBA National Hunt Fillies Bonus Scheme (offers a €5,000 bonus for winning  a mares-only bumper, maiden hurdle or beginners’ chase in Ireland) also playing a part.

Strictly speaking, there are not more mares in training than before but that is due to the drop in the overall horse population; 2007/8 was the season of the most national hunt runners in Ireland and fillies/mares ran 6,235 times that year while they ran 4,549 times last season. As a percentage figure, the number has been gradually going up, however; it was high at 28.1% back in 2007/8 but since dipped down to 25-26% in most of the intervening seasons until more recently. Over the last two campaigns, the percentage of national hunt fields made up of female runners has gone back up to 27.8% and 28.9% respectively, the last figure an all-time high from what I can see, so from that point-of-view the programme changes have been a success.

Things are less clear on the subject of whether the current crop of mares are better than before. Anecdotally there seem to be lots of good mares around – Apple’s Jade, Laurina, Benie Des Dieux and Shattered Love say – but they don’t win Pattern races against the geldings as often as they used to. In the noughties, there were a number of seasons when mares broke double-figures in Graded/Listed wins against the males and this was a time when there were fewer Pattern races; in 04/05 there were 11 such winners, in 06/07 13 winners, in 07/08 14 winners, in 10/11 11 winners. Since then – which comprises the period when the changes were made to the programme book – the totals have been: eight, five, one, three, six, eleven and five.

Whether this is a bad thing is open to discussion. Certainly there seems to be less acceptance of mares-only races from the wider jump racing public, at least in the sense that they would prefer to see them mix it against the geldings. We have the situation where obviously talented mares like Quevega are better known for the races they missed than the ones they took part in though her typically shortened campaigns were as much to do with physical issues and trainer caution as her gender. The scepticism towards mares-only races from jumps racing fans might also be down to them not being around that long; these races are nowhere near as embedded as their equivalents on the flat and on the level you rarely have anyone saying an Oaks filly should run in the Derby, allowing the best of them often to compete against the colts later. Or maybe it’s just the lore of the likes of Dawn Run that persists over jumps.

Regardless of the rights and wrongs of the programme alterations, one trainer has been at the forefront of using these new races to his advantage: Willie Mullins. Consider the table below of the top Irish trainers with fillies and mares by strike rate from the 2013/14 season through to 2017/18. All trainers on the list had at least 50 runners. For reference purposes I have also included some of the other big trainers in a separate mini-table too. 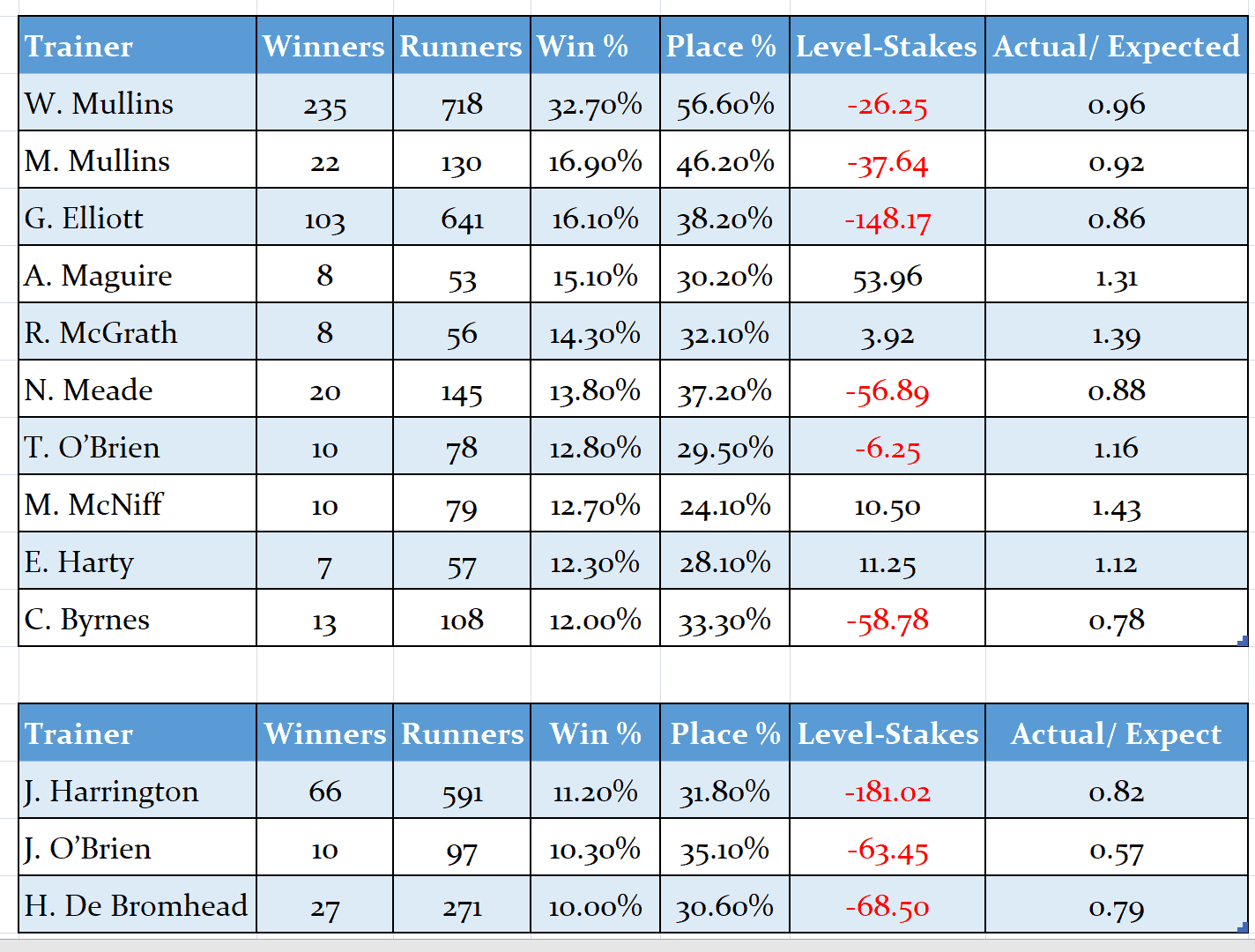 Simple strike rate is quite important here – at least in terms of a mare getting its first win – as for many owners getting a winning bracket on the page is what it is all about. Aside from Willie, Mags Mullins is a trainer who comes out well from these figures; she may be just ahead of Gordon Elliott in terms of win percentage but her place strike rate is excellent, a very clear second overall. Having seven-time winner Ballychorus was important for her but she had 12 individual winners in the period covered.

Of the bigger yards, Gordon Elliott, like Willie Mullins, has realised that running plenty of mares is a competitive advantage and Jessica Harrington is another trainer for whom mares make up a sizeable proportion of total runners. That is not the case for Noel Meade, Joseph O’Brien or Henry De Bromhead though Meade maintains a good strike rate with his female runners.

It can be interesting to note the comparative strike rates of trainers with male and female runners. Consider the 10 trainers with the most runners in Irish national hunt races in the five seasons prior to this one:

As with the flat, female runners win at a lower rate than males as a rule so a trainer who is coming close to their male strike rate is doing well; Mullins is three percentage points better with mares. One thing that stands out here, at least relative to the piece I did on the flat trainers during the summer, is how broadly consistent the big trainers are with both genders. In terms of strike rate anyway, it doesn’t seem to matter with Mullins, Elliott, Meade and Harrington though De Bromhead does seem better with geldings. That is from very few female runners, though Honeysuckle (a Grade 3 winner at Fairyhouse on Saturday) is doing her best to improve those numbers.

In the Graded and Listed scene, Mullins has been utterly dominant. He has won 42 such races between 2013/14 and 2017/18 with one-twos in 15 of those, akin to Aidan O’Brien in some equivalent flat Group races. Gordon Elliott is next in with 10 Listed/Graded winners, Jessica Harrington has had five, while no one else had more than two.

Mullins seems to have been consciously increasing his numbers of female runners over the last few years to take advantage of the growing opportunities. In the past five seasons, his total female runners each campaign has gone 122 > 110 > 121 > 153 > 212 and already this season he is at 228. In the period covered, 22.8% of all his runners were female which is at the upper end of the bigger trainers. Jessica Harrington had the most with 39.5% but there were trainers like Noel Meade (8.3%), Tony Martin (5.9%) and Mouse Morris (1.7%) who train very few mares. Meade is someone whose overall numbers suggest he should be training a few more and, along with the two Mullins (Willie and Mags) and some smaller yards like Terence O’Brien, that is where I might look to put one into training.

Needless to say my friend completely ignored my advice and went elsewhere but at least he gave me an idea for an article!