Welcome to a joyous, joyous edition of Social Discourse, as British racing makes its return from a six-day break caused by an outbreak of equine influenza (EI), which had put the sport into shutdown and caused concern over the Cheltenham Festival, due to commence a month today (allow yourself another little cheer).

Thanks to what one must say was quick and decisive action from the BHA, we are now set to return from tomorrow, albeit with caveats, giving (most) trainers a resumption of normality along with jockeys, owners, media outlets and the rest. There’s still time for Festival trials, too. Whoop!

Decision whether racing can return on Wednesday to be published no earlier than 10:30pm tonight. pic.twitter.com/6pXrkqgIWj

A reminder that the decision as to whether racing can return on Wednesday will be published NO EARLIER than 10:30pm, as per our update this afternoon ➡️ https://t.co/5TaFGi0j5M

We will attempt to publish the decision as close as possible to this time, and issue updates on timing

This evening’s veterinary committee meeting has been extensive in order to ensure that a thorough risk assessment has been carried out. An announcement will be made as soon as possible tonight. We will provide an update on timing as soon as we are able.

The British Horseracing Authority has tonight announced a risk-managed return to racing will take place from Wednesday this week. Full statement to follow.

After what was nearly a ten-hour wait – although the last hour and a half was perhaps more stressful than the previous nine – it’s fair to say that this had brought the normally fractious social community of Racing Twitter together. A recap for you, if you couldn’t stay up, or just need that good feeling again. 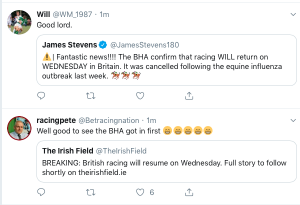 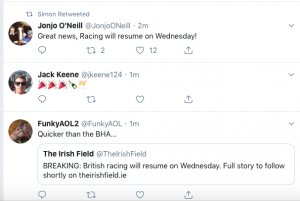 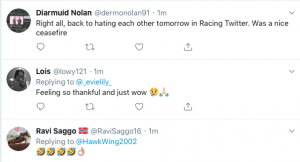 3. The Super, Super Saturday Ahead

We waited, and now good things are coming to us. Everyone within 10 miles of Cheltenham will still be breathing outwards with relief, but in the more immediate future, there are races to be won and more than a few Festival trials to be rescheduled.

Ascot’s card this coming Saturday was always going to be spectacular but, with the quick transfer of Newbury’s Betfair Hurdle and Game Spirit Chase to the Berkshire venue, it means we are set for a truly phenomenal day of action – the last chance for many high-class horses to run before Cheltenham.

Betfair Hurdle and Denman Chase added to Saturday’s Ascot Card. Should be fun this weekend.

2-mile novice chasers get a last chance to tune themselves up for a very open-looking Arkle Chase with the Kingmaker moved from Warwick to boost Sandown’s Friday card; there’s a Mares’ Hurdle which now moves to Haydock from the same card, and Wincanton gets a Mares’ Chase from Exeter.

Don’t Forget: If Ascot is getting you excited, then Haydock also has a feature – the William Hill Grand National Trial, plus a Mares’ Hurdle – and Wincanton features the Kingwell Hurdle as well as the Mares’ Chase. Best cancel those Saturday plans if you can.

Trigger-Happy Punters: Markets will have to be remade, with the BHA having to work out which yards can send runners, and the entries will come through at 1.30 today. So if anyone wants to get a jump…. Then have a sneaky tab open around 4 this afternoon.

It’s not as simple as some might think, however.

– No entries or declarations will be accepted from horses that have not been vaccinated in the previous six months.

– Added to this, trainers of all horses are required to submit a health declaration, the documentation for which needs to be with BHA staff at racecourse before a horse can be unloaded at the track

– If there happen to be any overseas runners, then they won’t be allowed to run unless there’s evidence of a negative test within last 72 hours.

– The ruling that all horses need to have been vaccinated in the last six months has put a spanner in the works of many plans. Already we know that Silver Streak will not be able to run in the Kingwell, whilst 2017 Grand National winner One For Arthur won’t be able to run thanks to needing another jab.

A list of yards that won’t be able to run at least in the next week has been speculated on twitter, and it could include Nicky Henderson, based on what we’ve seen here.

Nicky Henderson (based on no Verdana Blue)
Brendan Powell

We Have A Dream
Dream Du Grand Val WILL go to @KelsoRacecourse, Thursday

Those berating the BHA for not advising trainers of the need to get their horses a booster jab are wide of the mark, as this tweet shows:

This was dated 25th January from BHA – reminding all trainers to get a booster vaccination for EI. pic.twitter.com/F6IFakSUmi

As with all that has preceded it, the BHA is doing everything it can to support the sport, including announcing the provision of some additional races for circa 23rd February to enable those without booster jabs to get vaccinated and have a prep before the Festival:

BHA to schedule additional opportunities for horses missing out on key prep races due to essential vaccination requirements … weekend of February 23 … pic.twitter.com/CfnA3YOqii

5. Getting Jiggy With It

Meanwhile, racing in Ireland continued unabated and we were treated to a pair of good cards over the weekend with Punchestown having their Grand National Trial on what was at the very least an informative day.

Gigginstown can do no wrong at the moment and they gave themselves a tremendous hand in both the Aintree and Fairyhouse versions as Dounikos came right back to his best to beat Wishmoor by four and a half lengths, with General Principle just a half-length behind.

In what was a dominant showing for the O’Leary squad from start to finish – all three of their charges raced prominently – Dounikos put himself down as a major contender for either the Grand National itself at Aintree or the Irish equivalent, targets that Wishmoor and General Principle, the winner of last year’s Irish Grand National, will also be looking at.

Gordon Elliott, trainer of Dounikos, speaking to Tony O’Hehir of the Racing Post: “Dounikos might go to Aintree or Fairyhouse, we’ll see the Aintree weights this week,” he said. “I made a lot of entries and I could end up running 12 or 15 in the race. One of those could be General Principle, and Elliott added: “He ran a good race today and Aintree might be the job for him this year.”

Be smart: Dounikos is generally a 33/1 shot for Aintree (as big as 40/1 with Bet Victor) with the weights due out tomorrow, and General Principle is around the same price.

A good card at Naas saved ITV, who combined quickly and effectively with the HRI to show a decent card in absentia of Newbury’s Super Saturday.

The highlight was arguably Pravalaguna, who gave a fine front-running display to take the Listed Opera Hat Chase.

It's a 3rd win in four years for @WillieMullinsNH

Sent off at just 8/13 after strong support, the only scare came when jockey Paul Townend appeared to lose an iron briefly at the fifth last, but he regained full control before taking the next obstacle and from then on she didn’t put a foot wrong before marching to a 14 length success from Baie Des Iles in second.

On the same card, we saw another Festival contender in the shape of City Island, who justified long odds on favouritism with a facile win in the Connolly’s Red Mills Irish EBF Auction Novice Hurdle at Naas.

Mark Walsh could have written this column whilst he was sat onboard Martin Brassil’s six-year-old, and when he gave him his cue, he picked up trailblazing The Echo Boy and won by an easy seven lengths. Cut to as short as 9/1 for the Ballymore Novices’ Hurdle, he now goes as one of the main players.

Death, taxes, and Joseph O’Brien having smart juvenile hurdlers are the three certainties in life just now, and Band Of Outlaws joined a growing club by coming from last to first to take the EMS Copiers Rated Novice Hurdle.

In a slowly run race, JJ Slevin had Band Of Outlaws fifth of six most of the way round but when push came to shove, he comfortably had too much speed for long-time leader Maze Runner after the final flight to win going away by four and three-quarter lengths.

The Festival now? Well do be careful – the runner up was only seventh in Leopardstown’s Grade 2 at Christmas and O’Brien, if anywhere at Cheltenham, may send him for the Fred Winter although that is not certain at this stage.

Band of Outlaws cruises up on the near side to win the EMS Copiers Rated Novice Hurdle at @NaasRacecourse in style!

Even when O’Brien loses, he wins: The new JP McManus purchase Konitho was a disappointing fifth of sixth, not finding anything like the response of his stablemate, although O’Brien felt that the slowly run race did not suit him. “You’d have to say he was a little bit disappointing. The race probably didn’t suit him as he’s bigger, more of a staying type of horse.”

Jessica Harrington could have a runner in the Cheltenham Festival Mares’ Novices’ Hurdle in the shape of the wide margin maiden hurdle winner, Emily Moon. Robbie Power, having his only ride of the day, took the race by the scruff of the neck and she never saw another horse, eventually finishing 14 lengths clear of Debuchet.

Winning rider Robbie Power was impressed: “I was very impressed with her. She’s improved a good bit and probably dropping back half a mile in trip suited her better as she loves jumping out and rolling. Over two miles you can let her go, you’re not worried about the trip.”

Onto next week we go – should be a quiet one..!