Readers, friends, comrades in arms. We are here. There is just one day left before the 2019 Cheltenham Festival begins and, like all across this site, I can’t wait for the best that our sport has to offer.

It is a special edition of Social Discourse as we head into four incredible days, and as such there have been a few tweaks made to this particular edition.

If you’re headed to the home of Kings – and if you’re reading this, then there’s a fair chance that you are – please give me a shout. You can do so via the same avenues that others use to complain about me lots – @KeejayOV2 on the Tweet Machine.

A big thanks to the hard work of Matt Bisogno on this and all the previous newsletters.

It’s the greatest week of the year, but for most of us who take even half an interest, it is four days (or seven) that will have plenty of pitfalls as well as opportunities – no matter how you approach it. But what is the secret to a successful festival, both on and off the track?

I got in touch with the great and good to get some advice – and then gave some of my own anyway….

And some additional advice, from yours truly:

One race, one nose, two cameras. If it sounds too much like a sitcom, then that’s because it’s true; Welcome to British racing in 2019.

You know the scene by now. One For Rosie, having cruised into the lead of the European Breeders’ Fund Matchbook VIP “National Hunt” Novices’ Handicap Hurdle Final (try saying that without taking a breath), jumped to the front at the last. Sam Twiston-Davies punched and kicked for his life, and he just manages to get the better of the strong staying Third Wind, after a tense wait for the photo finish.

Or so we’d thought. Firstly it was all normal. We thought we’d simply seen another close Saturday finish. Punters got paid out and connections were being interviewed. And then we were told there was a delay. And then…

Has the judge called that right at Sandown?

Have Sandown messed up that PHOTO finish result? That photo shown is from the wrong winning line!?

That was just a flavour of the reaction. There are too many tweets to post, but 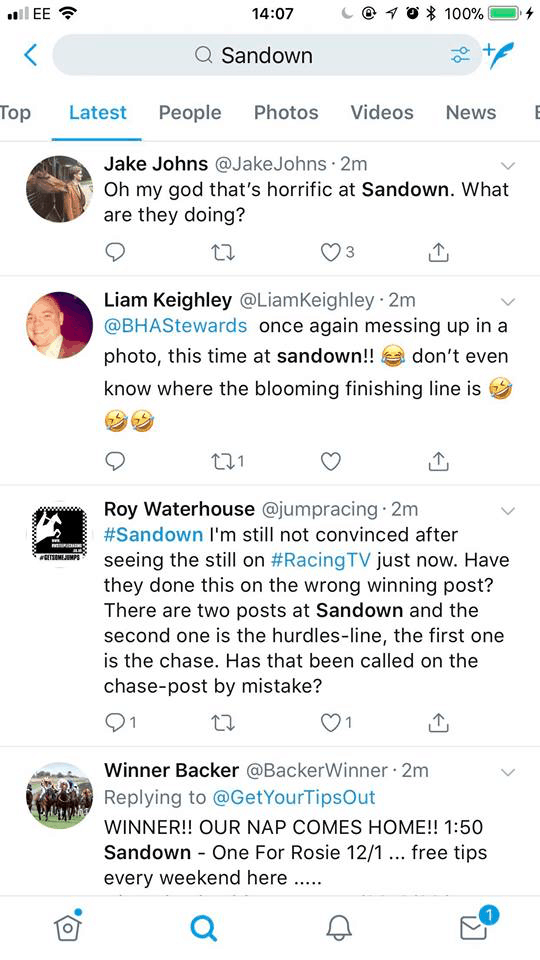 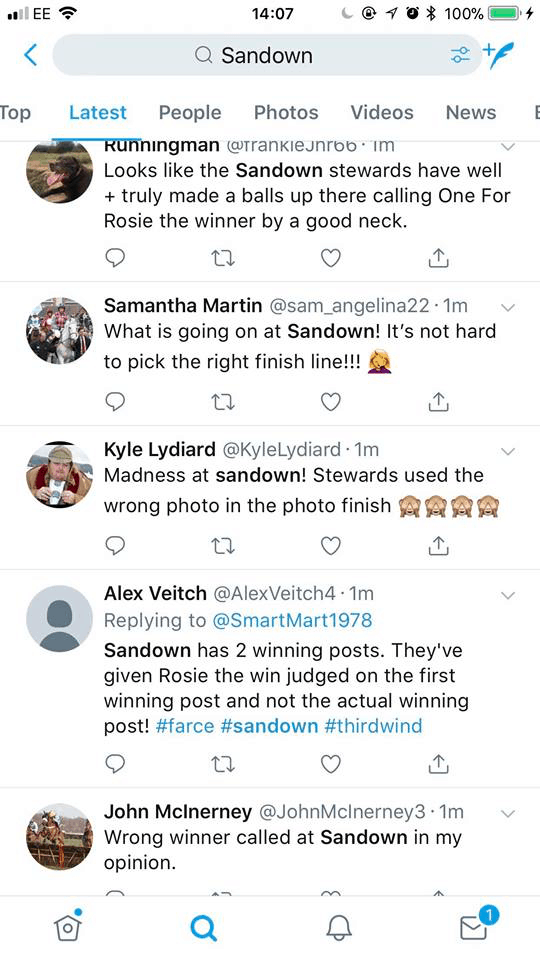 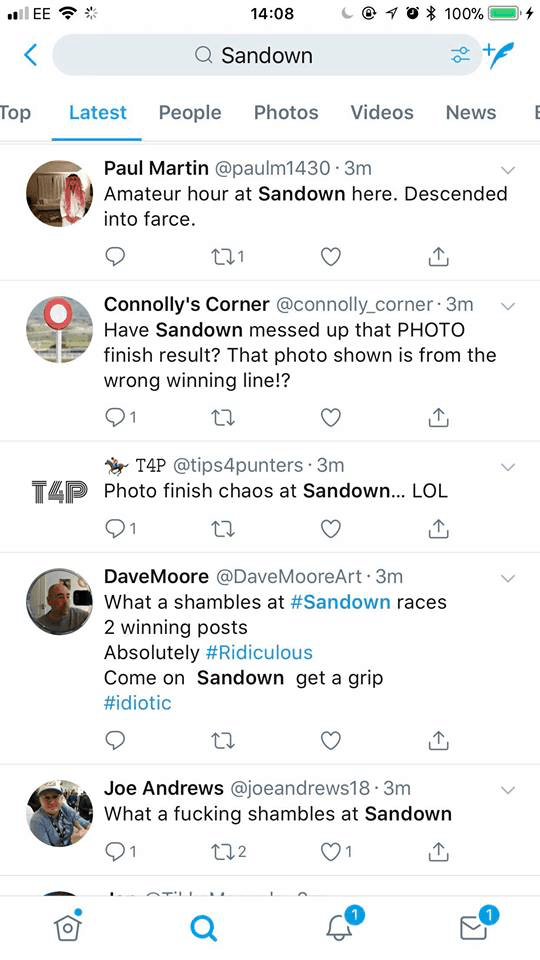 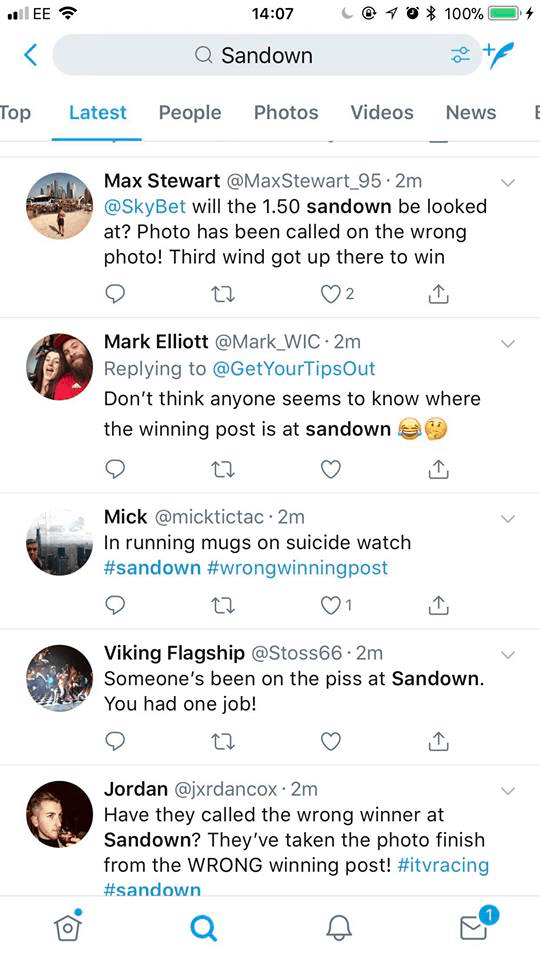 Fool Me Once: Amazingly, this wasn’t even the first time it had happened; this is the second occasion this year the wrong result has been called at Sandown, with the unique sprint course seeing Rio Ronaldo being announced the winner in a 5f handicap before the result was changed with Vibrant Chords handed victory.

Twice at Sandown in a year the wrong result has been called in a photo, absolutely ridiculous.

Then, there was this interview:

Rather than both cameras on the correct winning line, one camera was focused on the first winning line which resulted in the controversy at Sandown today. Chief steward Will Hudson attributes "human error" and apologises for the far-reaching betting implications pic.twitter.com/EPQDlhXkXz

BHA statement regarding the result of the 1:50pm at Sandown this afternoon: https://t.co/0lFf1UWNuC pic.twitter.com/3pkoZkVGxC

It’s just easier to ask what Paul Nicholls can’t do, the answer to which is nothing. His Malaya continued the stable’s brilliant form with victory in the Imperial Cup at Sandown on Saturday.

The five-year-old mare looked to have a tough task on when trying to hop the second last and then just stepping through it, buckling in the process, but Harry Cobden kept his cool brilliantly to allow her to regather her momentum and slowly but surely she caught up with Monsieur Lecoq – who had made the best of his way home whilst going strongly from two out – jumping the last brilliantly when needing to and eventually grinding her way to a one and three-quarter-length win.

What about the Festival? Paul Nicholls has been open to running her at the Festival in a bid to take a bonus in post-race quotes, telling Maddy Playle of the Racing Post: “She’s tough and won’t need to do much work, it’s definitely a possibility. We’re not saving her for anything so we might look at it.”

Be Smart: Looking at the rest of the field: Call Me Lord ran a tremendous race under his huge weight, First Flow ran a fine race on his first run for nearly a year, and Benny’s Bridge will be much happier on a sounder surface.

In much sunnier climes, Meydan had their Super Saturday, a leadup to the Carnival ending Dubai World Cup night that takes place in just over three weeks’ time. Highlights included:

Willie Mullins – yes, that’s right, remember him? – had a perfect warmup for the coming week when he had a 1-2-3 in the Leinster National, led by Pairofbrowneyes.

If you’re thinking that name sounds familiar then yes, you’re right – Pairofbrowneyes won this last year, and it was almost a carbon copy of his win in 2018, with an impressive show of staying power down the home straight to eventually end up winning by five lengths.

Now is that a Cheltenham omen? It's a 1-2-3 for Willie Mullins as Pairofbrowneyes takes today's big pot in Ireland by winning the Leinster National

Head to our website for all of today's news and results ➡ https://t.co/A2P3Yvg5vO pic.twitter.com/IwMIISkqSv

This matters why? It’s yet another boost for the form of Invitation Only’s Thyestes Chase win, which has barely produced a bad result, including the winner and the third of the Leinster National yesterday, and the Wylies will be very happy with their position ahead of the Gold Cup.

Winning Jockey Paul Townend, to Sportinglife: “He’s very likeable. It was like riding a handicapper. He made one mistake at the ditch down the back, but he sorted himself out and you couldn’t be any more pleased with him.”

Something to note: The form of La Bague Au Roi got another boost as Kaiser Black, second to her in the Flogas Novices’ Chase, won the Naas Directors Plate Novice Chase by an 11 length margin. He could be a big player for the rest of the season in novice terms.

Monday Musings: The Power of the Pen Stat of the Day, 12th March 2019
Scroll to top