The return of turf flat racing is marked this weekend, as usual, by the first big field cavalry charge of the season, the Lincoln Handicap. Below are some historical trends, a form preview and a tip or two for Saturday’s big race.

The race was run elsewhere in 2006 and 2007 while Donny had a face lift, so a touch of caution is advised when looking at historical trends. I’ve excluded those two renewals – hosted by Redcar and Newcastle – and will focus on the last twenty Lincolns run at Doncaster.

The research which follows comes from the excellent horseracebase.com Big Race Trends tool.

Younger, less exposed horses have held sway in the Lincoln, their full level of ability frequently not yet realised. Moreover, with this often being a first run as a four-year-old, the opportunity for younger horses to grow and mature from three to four can be overlooked by many bettors.

In other words, four-year-olds are a significantly better percentage play. Obviously, they’ve only won half of the last twenty Lincolns so it’s very far from a kiss of death for an older horse, but younger runners get a bonus point in this analysis.

What about those aged seven-plus? They are quite interesting: many analysts will look at the 1-from-74 record of such horses – that winner, Hunters Of Brora, coming in the last century (remember when Jason Weaver could do nine stone?!) – and dismiss the old guard. But closer scrutiny of their place record suggests that might be a little reckless. 15 of the 74 made the frame, which is 20.3% placers to runners. Nevertheless, on an each way bet, there’s a good chance we’re conceding defeat on the win part before the gates open (just four of the 74 older runners finished in the first two).

Age Trends Suggestion: Don’t dismiss any age, though note that four-year-olds are the percentage play in terms of both winners and placed horses to runners. If your bookmaker is offering enhanced place terms, you’ll be heartened to discover that 35.4% – more than one in three – of four-year-olds finished in the first six in the last 20 Doncaster Lincoln renewals.

How many starts has a Lincoln winner had? This will clearly be linked to age and the opportunity to race that confers. Looking at four-year-olds first who, remember, have claimed half of the Donny Lincolns since 1997, a few interesting points come to light:

When looking at the older winners, no strong patterns emerge.

Suggestion: Look for younger horses with some, but not much, handicap experience.

This is dangerous territory for a punter: there is a clear correlation between price and probability whereby the chance of lobbing a juicy-priced baby with the statistical bathwater is high. If that made any sense whatsoever, let’s review the data…

Only two of the 137 horses priced greater than 20/1 prevailed. They were sent off at 25/1 and 33/1, which wasn’t enough to cover the losers. Meanwhile, four winners were 20/1, including three of the last six. The 2012 winner was the aforementioned 25/1 chance, but I’d be happy to whittle the field at or around that sort of price.

Clearly, when looking at ante-post markets, we need to project to race time with scope for much market to and fro in the interim. Put succinctly (that’ll be the day!), beware the genuine longshot but don’t be afraid to back one at, say, 28/1 that you believe will shorten.

At the sharp end of the betting lists, seven of the last 20 Donny winners were sent off 5/1 or shorter, the last three of which – going back to 2005 – were trained in Newmarket.

Hmm, the draw. A contentious subject which is often, perhaps generally, misunderstood. In big field races over a mile more often than not there is no draw bias as such; rather, there is a pace bias, with an uneven distribution of early speed across the track. The field tends to congregate into groups, the location of which can vary depending on the going as well as the early speed.

This year, with the weather set reasonably fair, the Lincoln is likely to be run on good or good to soft ground. Using the Geegeez Gold draw data for large field Doncaster mile handicaps reveals the following, by segment first and then by individual stall (actual position, i.e. accounting for removal of non-runners), based on data since 2009: 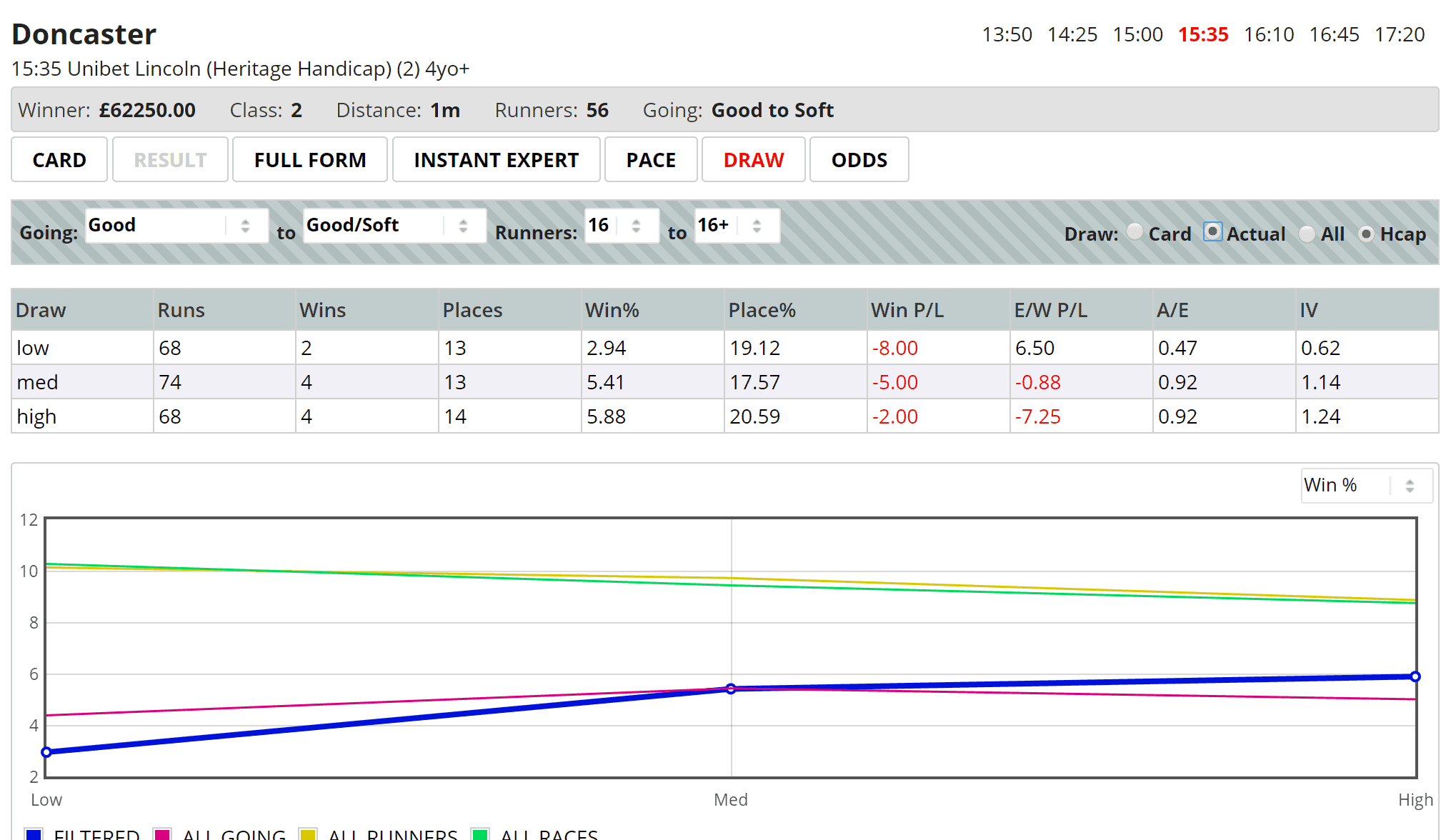 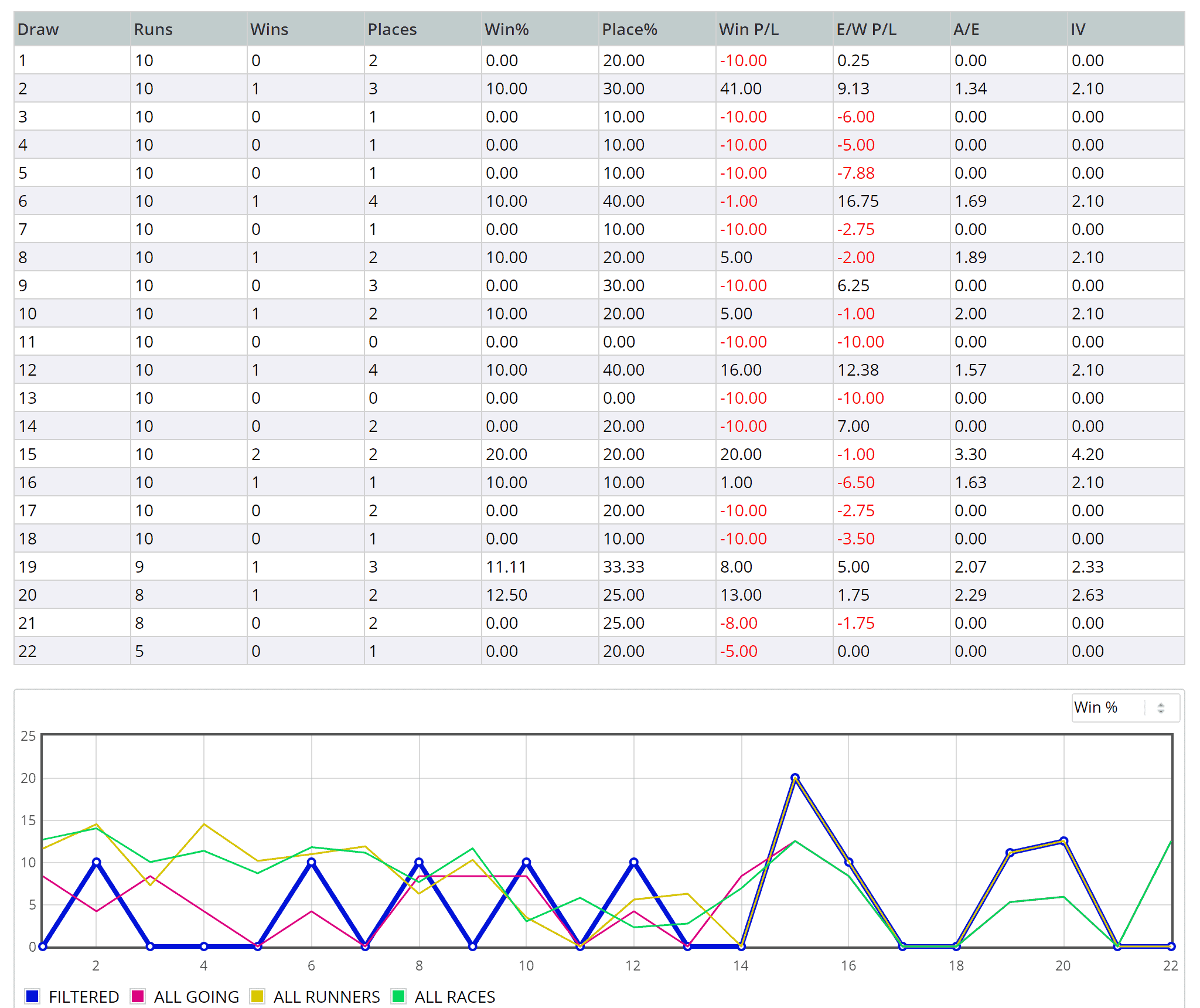 We can go one stage further with the Gold draw data and overlay pace information; this gives us a feel for how run style might be brought into consideration. In order to get a little more data into the picture, the below is based on Place % rather than Win %.

The Heat Map is a fairly crude visualisation but it does offer a perspective on what might be considered a favoured draw/run style combination. In fact, I think it quite well illustrates that pace is probably more important than stall position over this course and distance in big field good ground handicaps.

To wit, it doesn’t matter where a front-runner is drawn, it will likely struggle to cling on down this straight mile from so many pursuers. Prominent runners have tended to fare little better, with those more patiently ridden – especially in midfield – seemingly best placed to hit the frame. Again, that appears irrespective of stall location, though naturally from race to race one part of the draw may be favoured more than the others. 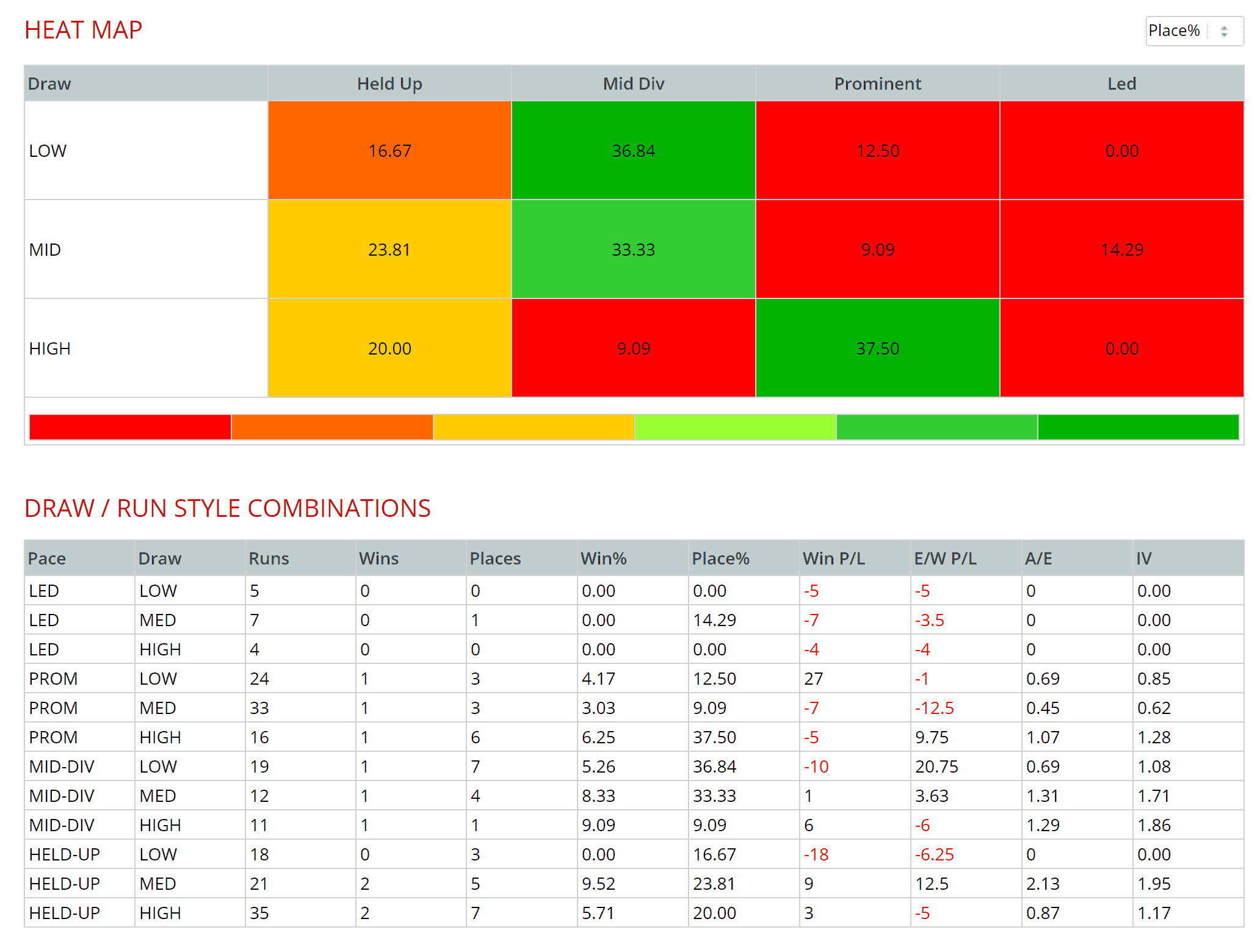 That’s a fair amount of intel and, especially in the case of the draw data, I wanted to make a more general point than simply ‘the Lincoln draw bias is x or y’. As can hopefully be seen, the favoured part of the draw may be the part where the most early speed is, which in turn sets things up for a later runner in that part of the field.

If that is correct, a look at the pace map may reveal the who’s and where’s of this specific race. 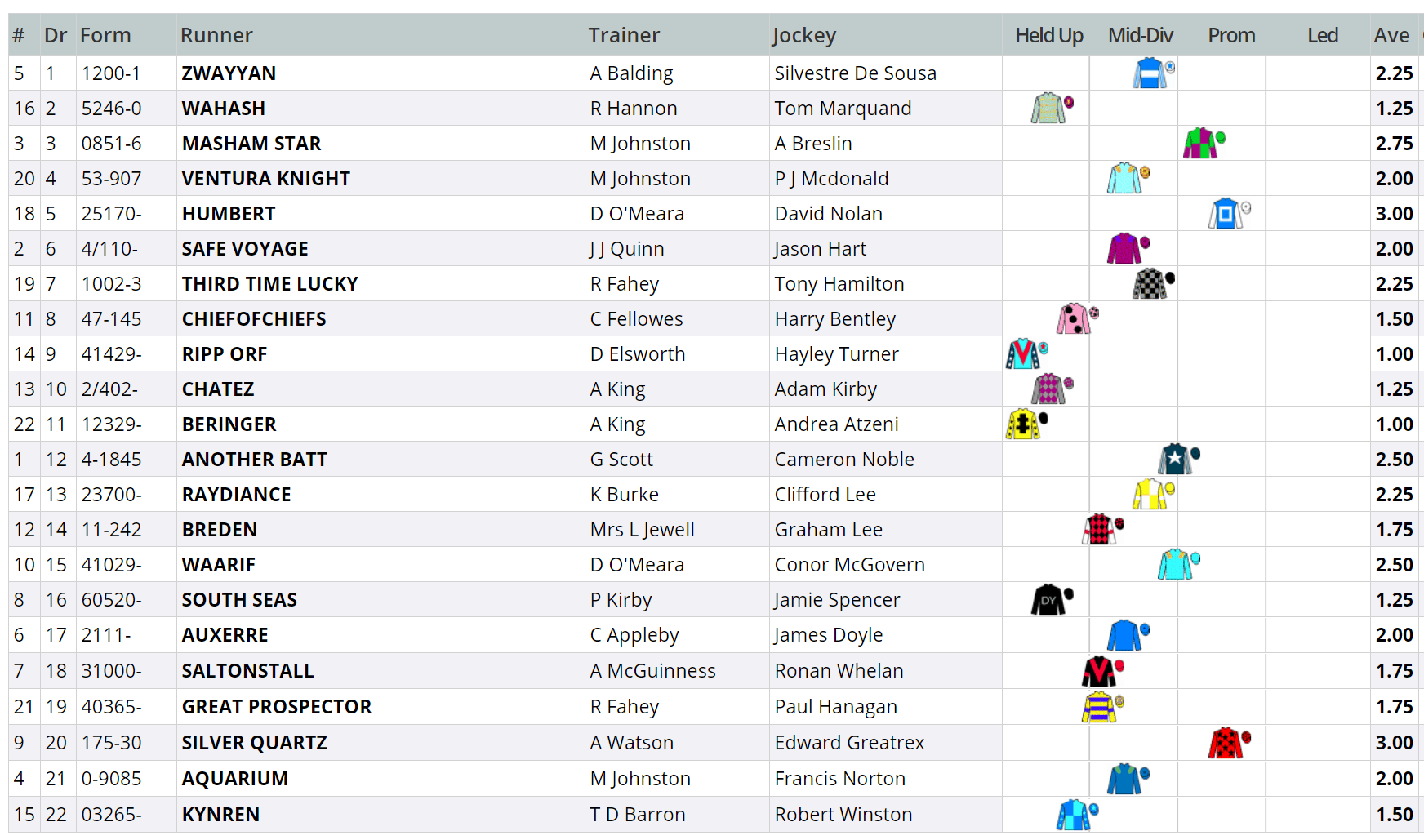 As can be seen, there is very little out and out pace in this field. Masham Star, Humbert and Silver Quartz tend to race prominently but most of these like to be ridden more patiently. There is a higher concentration of midfield runners in the high half of the draw and it might be that those have a slight edge, but it is marginal if relevant at all.

So where does all that leave us in terms of finding a winner?

There are eight four-year-olds in the line up, headed by ante post favourite, Auxerre (7/2 general). He won his last three of four starts last term, having been unraced as a juvenile, and his form is working out very well. Trainer Charlie Appleby traditionally has his team fit and firing in the early weeks of the season, and this year is no exception. Indeed, Appleby has form figures of 124221222112113121111 in UK so far in 2019. It will, then, be no surprise if Auxerre proves the proverbial blot on the handicap. Stall 17 should enable James Doyle, who sidesteps Dubai World Cup night to take the ride, to get a position where he wants.

Beringer (20/1 bet365) was good enough to run a close second to Wissahickon over ten furlongs at York last season, form which puts him in the picture if coping with this drop in trip. He’s sure to finish his race off well if not too far back, but I see him being outpaced off possible steady fractions as a hold up horse who stays further.

The unexposed handicappers include Auxerre, Raydiance, Great Prospector, Another Batt and Silver Quartz. All of these are four-year-olds and of interest when one considers that nine of the last 20 Doncaster Lincolns were won by a 4yo with between one and four prior UK/Irish handicap starts. That simple setup produced 50 qualifiers (18% win rate, and 30% placed) and an SP profit of 43.33 points.

Raydiance (50/1 888sport) was a Listed winner last year on soft ground but seemed to lose his way thereafter. That said, he ran a decent race when a five length seventh in the Group 2 Park Stakes over seven furlongs on this track.

Great Prospector (50/1 Unibet) represents trainer Richard Fahey who bids for a third winner in the race since 2012. Fahey’s other winners were 12/1 and 25/1 so it might not be impossible for this lad to join them. Although not certain to stay, he’s drawn close to the favourite and fits the historical profile quite well.

Drawn in the middle, and with a fair bit of weight, is Another Batt (33/1 Skybet). The George Scott inmate ran a cracking fourth in the Balmoral Handicap on British Champions’ Day, coming from off the pace there. He handled the big field well that day and, though the ground was soft, it was good when he won a Class 2 mile handicap at Chester earlier in the season. Since then he’s been racing in Dubai, where he won a 7f handicap before running creditably in a Group 2 over the same trip. Two further runs were both over an inadequate six furlongs and, if he’s recovered from the travel back to Blighty, he’s an interesting player.

The young unexposed brigade are completed by Silver Quartz (20/1 general), whose record on straight tracks over a mile is 231. He too is drawn in the high numbers, alongside Great Prospector and Auxerre and he looks set to race in a prominent to midfield position.

The favourite, AUXERRE, has an outstanding chance. He’s lightly raced, progressive, comes from a white hot yard, has the choice to go middle or near side depending on how the field fan out from the start and, well, probably represents a lick of value even at 7/2. The form of Newmarket-trained horses sent off at 5/1 or shorter in this race is 127100111. And seven of the 14 horses sent off at 5/1 or shorter in the Lincoln since 1997, regardless of yard location, have won for a profit of 23.33 points at SP. It may be a case of not over-thinking things on this occasion!

With bookies offering at least five places each way and, on the day, probably six here and there, it is worth looking for an each way alternative instead of or as well as the favourite. Another Batt has the toe for seven if this is tactical but also has form in a big field over a mile, so assuming he’s over his jet lag, he could make the first five at tasty odds.

For each way burglars, the way to play may be Kynren, whose form in big field handicaps reads 303265. He looks very likely to be on the premises again and, in the parlance, ‘deserves to win one’.

Back AUXERRE to win at 7/2 general

It’s great to have the flat back. Let’s get off to a flyer!