You all know where this is starting.

Look at it. Drink it all in. Reminisce, all over again, and enjoy Tiger Roll’s history-making repeat Grand National triumph.

Back-to-back Grand Nationals and a place in history pic.twitter.com/vcF6v9JEOL

Normally we post the best tweets in here that you might have missed, but there were so many that only the photos can do justice to racing’s collective scream of joy. 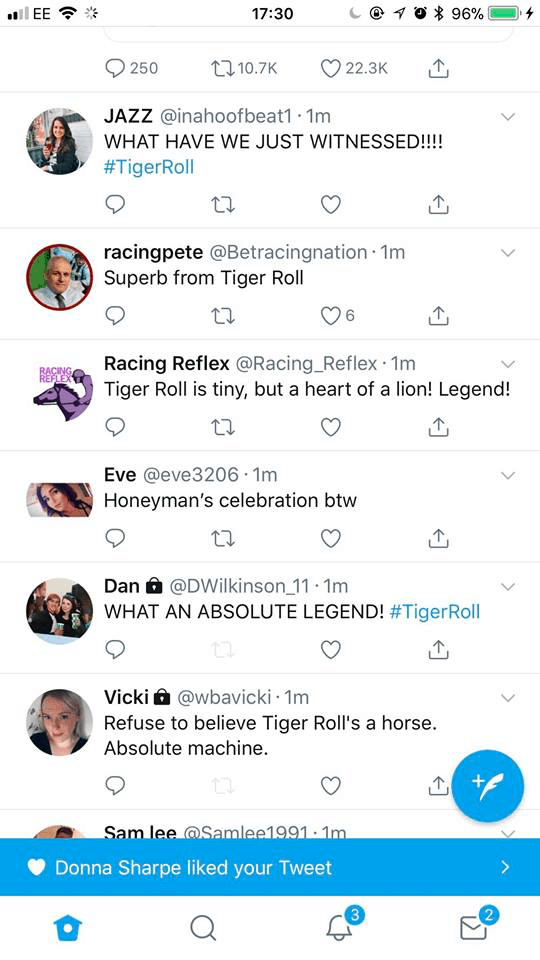 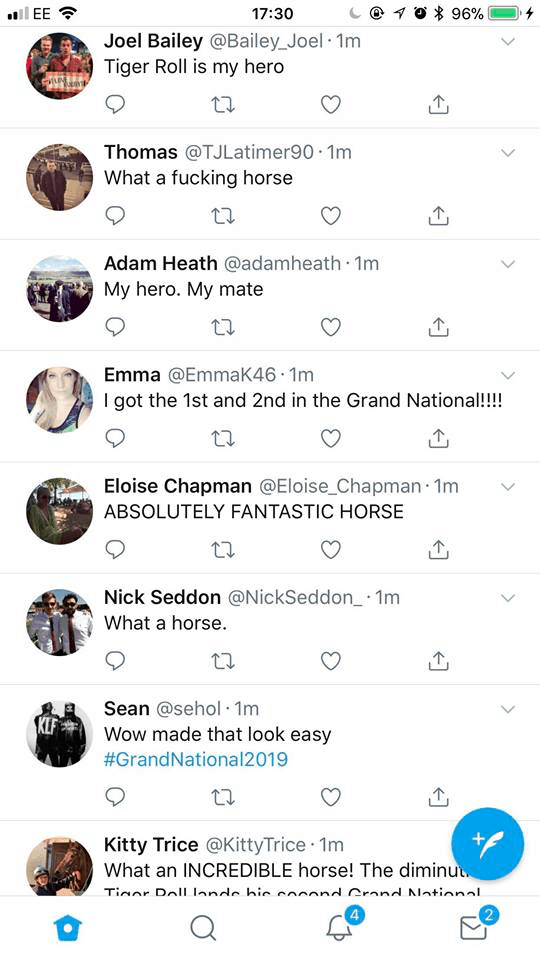 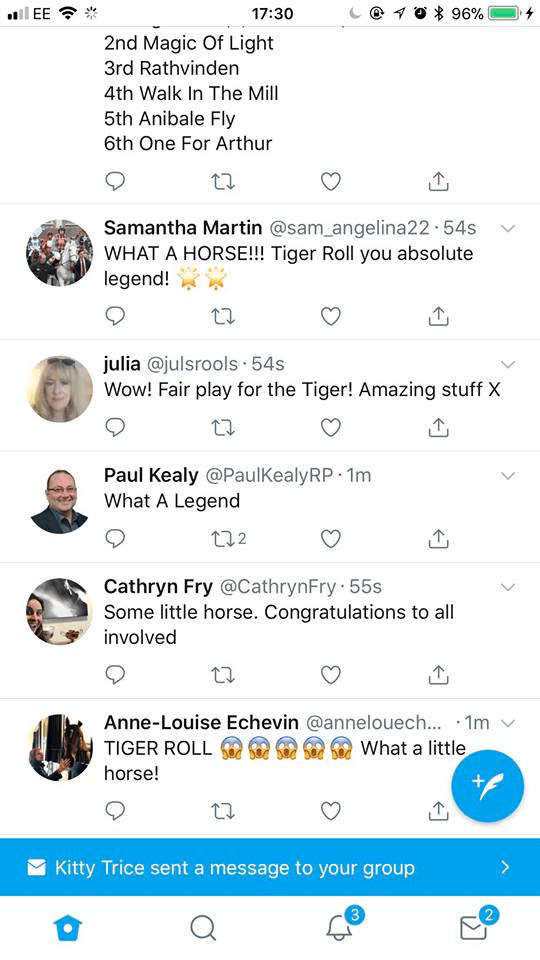 Hindsight is a powerful thing, but Davy Russell and Tiger Roll were always travelling beautifully and once the diminutive nine-year-old jumped to the front after the Elbow, it appeared – just like last year – to be simply a matter of how far, and he fairly sprinted clear of the young mare Magic Of Light, who ran a sensational race to finish second at 66/1.

The racing community – and basically the whole country of Ireland – were in raptures after taking a 1-2-3, with the popular Rathvinden finishing third, but this was all about one brilliant horse.

What they said: “Tiger Roll isn’t Red Rum – he’s Tiger Roll – and I feel no pressure to go back and try to win a third time. There’s huge public affection for him and I think we’re duty-bound to mind him now.” – Michael O’Leary with some performance trolling regarding Tiger Roll’s potential attempt at a three-timer.

“I was trying to watch all of mine, I can’t believe it. I never once thought he was going to win until he crossed the line, because all I could remember was last year. He didn’t tie up this year. He’s an absolute gentleman to deal with.” – Gordon Elliot in the aftermath of his third national win

“This horse and this place is amazing. People go on about certain sporting events, but Liverpool and Aintree are so far ahead. People come here in their droves to cheer you on and they can be so proud of what they have here, it’s so well run. It’s televised all around the world and I’m so proud to be a part of it, I can’t believe it.” – Davy Russell, who had an easier time of things this year in the home straight

There were 39 other horses (I know, did you also forget?) who lined up at the start, and many fine performances from the 19 horses who managed to complete the course.

It’s something of a surprise that Jessica Harrington, arguably the best dual code trainer around, hadn’t participated in the race before, and she nearly took it at the first attempt with eight-year-old mare Magic Of Light, who ran a tremendous race from the front before Tiger Roll flew past. Despite a mistake at the last (and a significant one at the Chair, after which Paddy Kennedy did well to stay on board), she came home two and a quarter-lengths clear of Rathvinden, who travelled best for much of the way, and looks sure to be back next year.

Rathvinden gave a bold sight in third, although he was unable to give Ruby Walsh another National winner, whilst Walk In The Mill, the Becher Chase winner, was best of the British. He delighted the shrewd Robert Walford and gave James Best a fine spin; still only nine, all roads would lead to Aintree next year for him.

⁦@AintreeRaces⁩ best of the British Walk in the Mill fresh and well after his brilliant 4th place in the Grand National yesterday. pic.twitter.com/gLYhjWGiEd

Spare a thought for Anibale Fly, who ran a titanic race to finish fifth under top weight, just half a length behind Walk In The Mill. Tony Martin has one of the most consistent staying chasers in the game, although he looks set to be forever too high in the weights to win this great race.

Delighted for Tiger Roll but spare a thought for Anibale Fly. 4th & 5th in two Grand Nationals and 2nd and 3rd in two Gold Cups. Surely he's due a big one in the future

The 2017 winner One For Arthur had unseated twice but looked like the horse of two years ago when making a huge move around the outside coming for home, before he just faded late, and Lucinda Russell is already thinking of aiming him at next year’s contest.

Thank you Arthur, and some emotional stuff. https://t.co/ufD2LuuwlY

Aidan O’Brien and Ryan Moore kick-started their season with a treble on Leopardstown’s Classic trials day, where we saw a number of eye-catching performances.

Could she follow up at @NewmarketRace in a month?

LADY KAYA now as short as 12/1 for the QIPCO 1000 Guineas after an impressive success in the Ballylinch Stud Trial at Leopardstown.pic.twitter.com/lq0kJ6Xm51

Never No More inflicts a first defeat on Madhmoon in the @BallylinchStud 2,000 Guineas Trial for Ryan Moore and Aidan O'Brien at LeopardstownRC

Interesting times/sectionals from Broome, wide-margin winner of the Ballysax Stakes. Mixed messages, but overall time was more than 4.0s faster than the following handicap. Will be writing about this and other stuff in The Irish Field as usual.

Wow! They don't come much more exciting than Ghaiyyath – eye-popping winner of the Group 2 Prix d’Harcourt at @paris_longchamp for William Buick, Charlie Appleby and @godolphin! pic.twitter.com/z4OqAEXW93

Back to the Grand National, arguably the biggest PR moment for racing of the year, and certainly the biggest moment for any broadcaster involved in the sport, so ITV and the BHA have every right to be delighted with their viewing figures.

(Over a million up on last year).

The coverage on Saturday scored a peak of 9.6 million viewers, a 12 per cent increase from the 8.5m in 2018 according to audience figures, with the average audience for the National show up from 5.1m to 5.4m, an endorsement of a programme which makes a lot of effort to reach first-time viewers and non-experts.

There are a multitude of personalities on the programme – different strokes for different folks, as they say – and it worked through the week too, as shown by a seven-figure audience for the Foxhunters’ on the first day.

Wake Up To ITV: There was also a record audience for The Opening Show too of 300,000 – a fine figure considering it was an FA Cup semi-final morning.

Takeaway: There’s much to be said about the draw of a horse who had such a big chance of back to back Nationals, but these figures are welcome news in an era when there has never been so much choice for sports fans. ITV’s approach of trying to convert causal watchers and educate first timers is the right one when younger fans are needed more than ever.

Across the three days of Aintree, in case some had forgotten:

ICYMI: Kemboy dominated the Betway Bowl Chase at Aintree Racecourse as @Ruby_Walsh took advantage of a mistake at the last by Balko Des Flos.

Join us tomorrow on @ITV from 2PM for Day Two of the #GrandNationalFestival pic.twitter.com/bMvaot34mN

It's a third time lucky for Supasundae!

Join us on @ITV from 2PM tomorrow for Day Two! pic.twitter.com/PNPsNZ9LCn

Kalashnikov got the 2019 #GrandNational meeting off to a flying start for the Amy Murphy team – read our report on the Devenish Manifesto Novices' Chase which includes a full replay plus an interview with @jackquinlan92 >>>https://t.co/GQu0wjJPko pic.twitter.com/zbyfTDxgHM

He led for so long he barely even saw another horse! pic.twitter.com/1kli7qmgeE

Next week? The small matter of Winx’s last race….