You might have guessed this already but more than anything in horse racing, it is the role of the trainer that fascinates me, writes Tony Keenan. We can wonder about the influence of various factors in trainer success, some of which are very obvious, others of which we will never know; no more than a punter, if a trainer has an edge, they can hardly be expected to comment on it publicly.

(A somewhat random aside: I read recently that Thady Gosden – son of John – had spent some time at the Joseph O’Brien yard and while I appreciate O’Brien Jr. seems a thoroughly decent man, there surely had to be the temptation to either: one, fill him with misinformation to take back to Gosden Senior, or, two, lock him in a darkened stable with a fire and a poker to extract the secrets of what his father does so well. I have never understood this part of racing where one trainer allows a rival, actual or potential, access to their yard. It must be because they’re all lovely people.)

One thing we can do however is look at the broad sweep of success trainers have over a period of time. Below I have put together the records of the top 20 active Irish flat trainers (with one exception, Patrick Prendergast, for reasons that will become apparent) and their turf runners in Ireland over the past decade; Dundalk is not included. It necessarily leaves out some relevant figures – notably Fozzy Stack – but should offer a decent overview of what has happened since 2009.

It deals with winners only which is a pretty blunt instrument but one that most trainers seem to apply as a measure of their own success. A clatter of winners doesn’t always equal success however; Aidan O’Brien had a record-breaking season at home in 2018 but most (including the trainer himself) would have regarded the campaign as a down year if not a failure. Ken Condon had only seven turf winners last year but one of them was Romanised in the 2,000 Guineas so 2018 might even prove the best of his training career. But in the main, winners figures are useful, especially when compared to what went before. 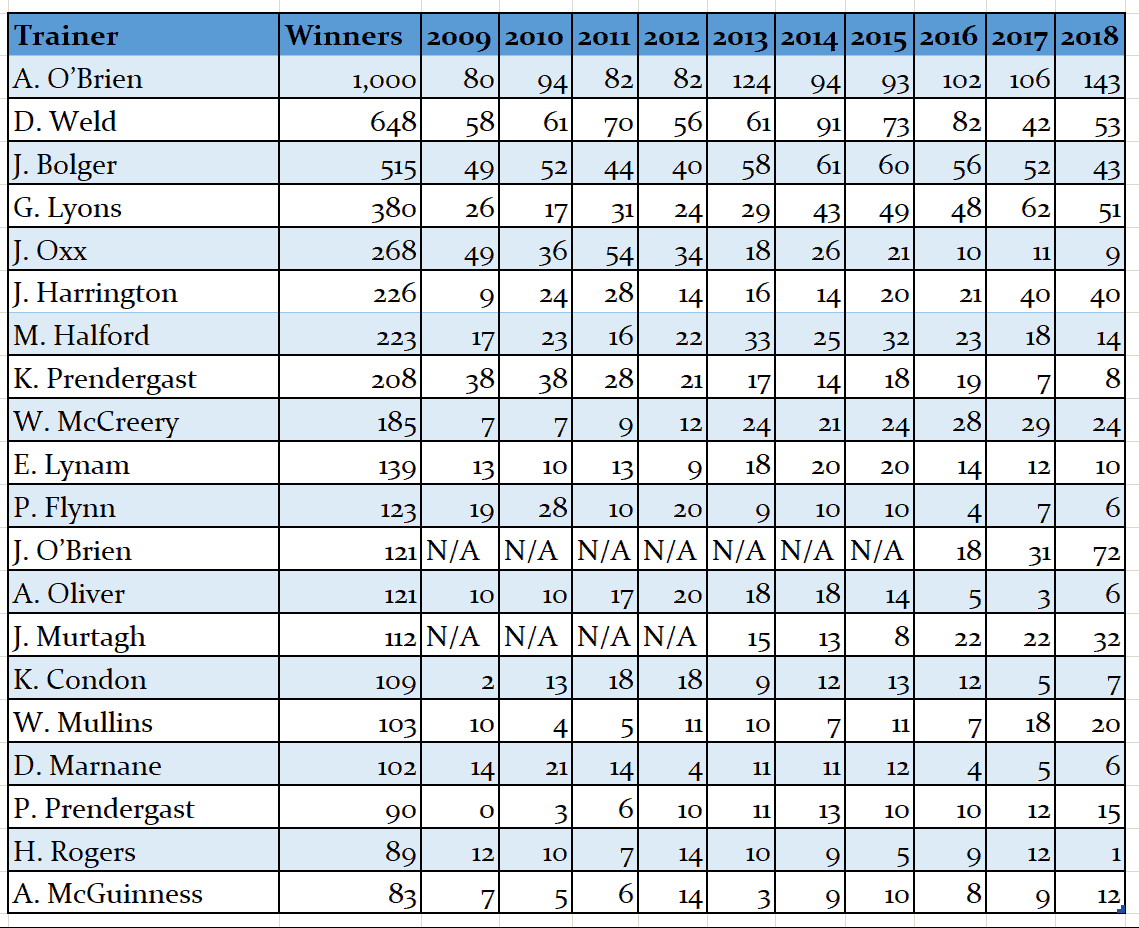 That’s a whole lot of numbers right there so the Cliff Notes version is below: 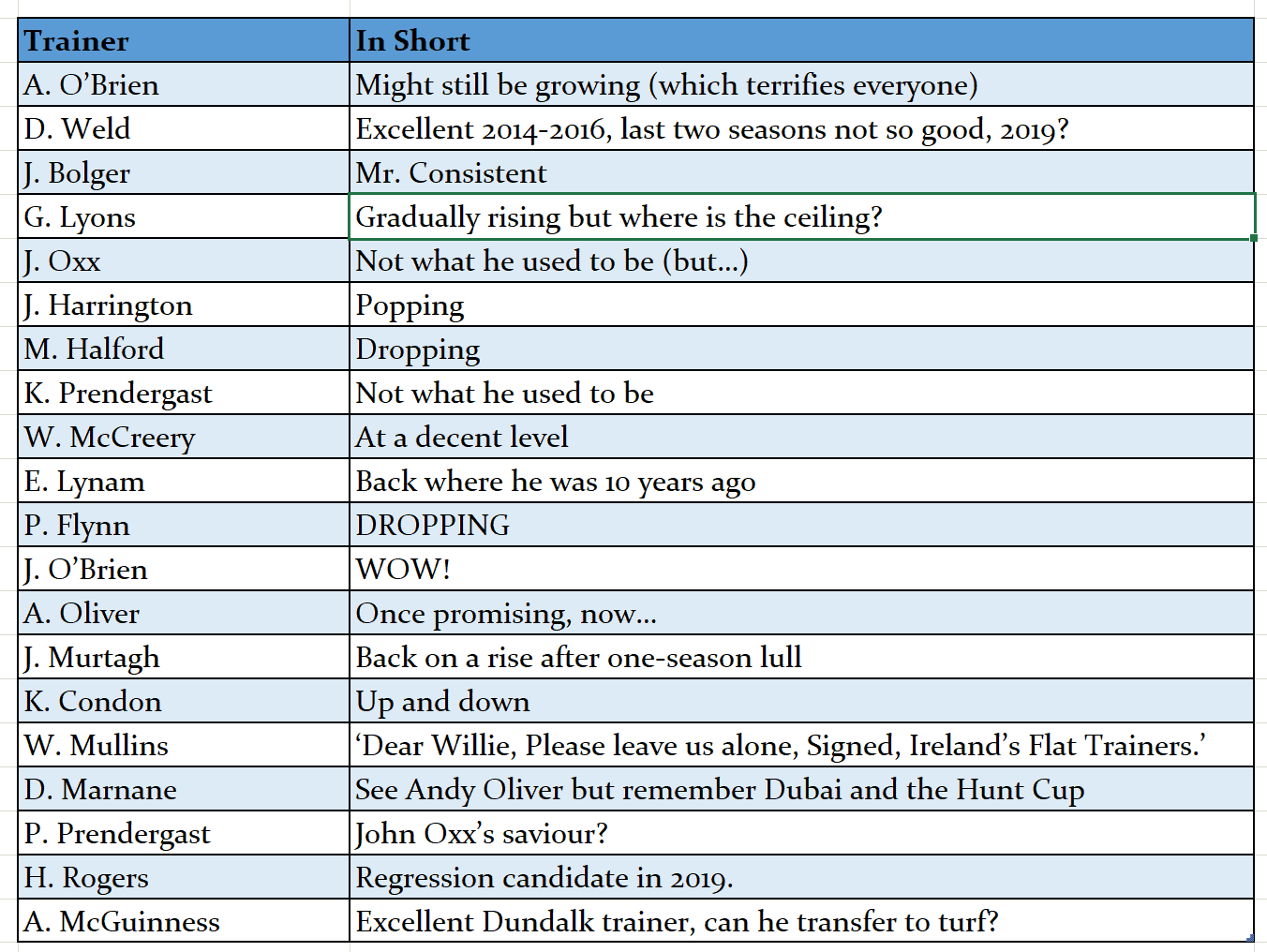 This does give us a fair overview of what has happened over the last ten years or so, which yards have risen and which have fallen, what rising stars made it and who never got there (hint: it’s very difficult to make it in Irish flat racing). The decline of the veteran pair John Oxx and Kevin Prendergast are patterns that jump out immediately as is the gradual rise of Ger Lyons, while a recent jump from Jessica Harrington and the rapid growth of Joseph O’Brien are also notable.

Atop the table for the decade and every year of it is, of course, Aidan O’Brien. 2018 was represented as a disappointing campaign for Ballydoyle, a mid-season bug impacting a number of horses, his record outside of Ireland significantly worse than previous years and the yard a little thin on stars, relatively speaking (see last season’s flat season review for more on this). But at home, it wasn’t just business as usual but a record-breaking season with 143 winners on the turf, his previous best being 124 in 2013.

From the point-of-view of the other major Irish yards, it was both disappointing and surprising that they weren’t able to exploit this brief chink in the Ballydoyle armour with the likes of Weld, Bolger and Lyons having down seasons to one degree or another. Perhaps his continued success at home, numerically at last, allowed O’Brien to remain quite sanguine about his horses being sick though experience does seem to have brought confidence whereas in times past he may have let it rattle him a little. If anything it was his son who took advantage of any slippage, his win in the Irish Derby standing out, though much of Joseph’s success came in lower grade handicaps with acquisitions from other yards. Aidan can at least console himself that should things ever go belly-up at Ballydoyle, he can have an assistant trainer post on the hill!

It is hard to get away from the belief that 2019 will be another big year for O’Brien, Sr. He has a huge team of horses, the spring has been kind weather-wise and his stars all seem healthy, none of the big guns ruled out yet. His early returns have been good with the likes of Magical, Le Brivido, Flag Of Honour and Sergei Prokofiev running well on seasonal debut.

One of O’Brien’s old rivals in the best races was John Oxx and his 2019 could be one of the most fascinating of all, Patrick Prendergast having come on board as assistant trainer and taken his team of horses with him. Plenty wondered at Prendergast’s motivation for this move, viewing him as a trainer on the up with Oxx the main beneficiary of the new setup. I don’t think it’s as simple as that as the John Oxx name still has some cachet while there is also succession to think about with Oxx aged 68.

It is also important to note that while Prendergast trained his first Group 1 winner in 2018, these successes have proved largely useless in elevating mid-range trainers to a higher plane. There have been numerous examples of Irish trainers winning their first Group 1 race this decade and it doing little or nothing for them in terms of getting more winners or horses in the short-term. Ger Lyons won the 2011 Cheveley Park with Lightening Pearl; he trained 31 winners that year and 24 and 29 the following years. Eddie Lynam won the Nunthorpe with Sole Power in 2010; he had 10 winners that year and 13 and 9 respectively the next two seasons.

It was a similar story with Mick Halford and Jessica Harrington in 2010 as they won Group 1 juvenile races with Casamento and Pathfork and while it could be argued that all those trainers making the top-level breakthrough around that period was awful timing with a view to attracting new owners as they may have cannibalised each other’s opportunities, neither Adrian Keatley nor Ken Condon seem likely to ‘kick on’ from recent Classic victories. Both Lyons and Harrington have gone to another level since those wins but that was because of their broad body of work rather than one win or horse and Prendergast may well have been wise to learn that lesson from recent history.

One thing Oxx may be hoping to get from Prendergast is an edge with juveniles; Oxx has trained only one two-year-old Group winner since 2013 and if there is a single cause for his decline this might be it. His patience, once seen as a virtue, now seems a black mark for prospective owners. Oxx did have a reasonable record with juveniles in the early part of the decade but that dwindled to nought in the last five years with only nine two-year-old winners from 137 runners (6.6% strikerate) between 2014 and 2018; in that period, Prendergast was 21 from 196 (10.7% strikerate).

Last season, with Skitter Scatter playing a big part, Prendergast finished tenth in the trainers’ championship, Oxx only thirty-eighth. Combining their prizemoney would have brought them up to eighth overall. Oxx commented in a recent interview that he felt he had only seven horses that could win a race going into last season (eight won in the end) but combining his and Prendergast’s numbers puts them in a better place for 2019. Oxx ran 35 horses, Prendergast 28, and 63 total horses would have left them just behind the O’Briens, Weld, Bolger, Lyons and Harrington last year. In the same interview, Oxx said they had 75 horses in for the season and while all of them won’t run, they should be significant players.

To conclude, let’s look at a yard or two that might be due some regression, be it positive or negative. One way to do this might be to compare what a trainer did last season versus the broader picture of the last ten years but sometimes that gives a false impression. Using an approach like that, one might think that the likes of Jessica Harrington and Johnny Murtagh are due to drop off now while someone like Mick Halford or Kevin Prendergast will bounce back. The reality is that both Harrington and Murtagh are simply yards on the up, the former in particular having taken a leap seemingly out of nowhere, never having more than 28 winners prior to 2017 but having 40 in each of the past two years.

I do think that strikerate could be informative here is it takes less account of the actual of number of horses in the yard; a trainer might be able to maintain a broadly similar return regardless of how many individual runners they have from season-to-season, allowing that there are outliers now and then. So below are the ten-year strikerates of the top 20 active turf trainers versus what they did last year. 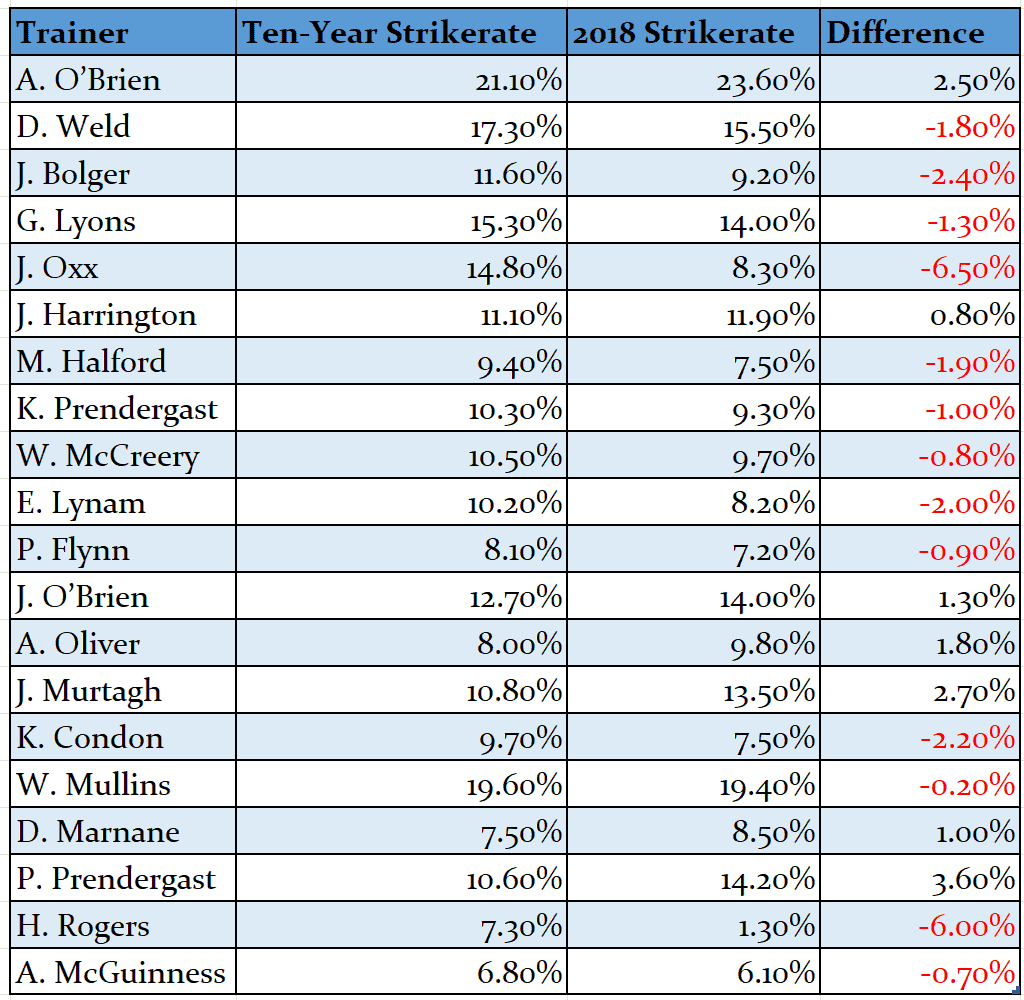 The majority of the differences are too small to be statistically significant though the numbers for Oxx and Patrick Prendergast are interesting in light of what is discussed above. The one that stands out however is Harry Rogers who had a terrible 2018 but might be about to improve on that this year. Smaller yards like his can be a hostage to fortune and the dry summer of last year hardly suited his horses, many of whom prefer an ease. I must admit to being a bit of a fanboy of this stable as I like how his horses run frequently when they are fit and better days should be ahead.