It seems like ages since I’ve had a chance to put digits to keyboard and present something on here. The usual spiralling demands of life that so many of us have are to blame; though in truth most of those ‘demands’ fit more squarely into the pleasure bucket than the chore pail. Anyway, in this eclectic catch up, I’ve a few thoughts on a number of somethings and nothings really: no earth-shattering news, just some parish notes and the like.

As you may know, we recently introduced some feature updates. Things like IV3 and Instant Expert inline are small (but perfectly formed) enhancements to existing features. More on them here if you missed the bulletin. The bigger part of that release was given over to a new feature, however, which is the ability for users to add your own notes and, particularly, ratings.

It was always the intention to introduce the baseline content and then to respond to you, our wonderful readers and subscribers, with the finessing. And so, in addition to what is there now, we are currently working on adding a few options which allow users to include or exclude jockey allowances, weight for age, and weight generally.

When I pulled on the thread of ratings functionality I suspected there would be a range of somewhat niche requirements in the space, and I’m happy to accommodate those that can be justified in terms of the development effort and their broader utility. Please do keep your suggestions coming in!

The Gold development work stack is constantly evolving. For every item ticked off another one or two seem to get added. That’s not a problem at all, it just means priority decisions have to be made and not everything will ultimately happen. We also have a couple of major infrastructure projects in train at the moment – things which underpin everything you see and do with the site – and those cannot be taken lightly for obvious reasons.

However, we’ll continue to develop and these are the things you’re likely to see next – within the next six months – as part of Geegeez Gold:

– Ability to produce pace maps based on a field’s last two, three or (as currently) four runs

– Addition of a range of new data elements

– A raft of smaller additions and enhancements

I need to be careful about over-promising, and the reality is that the QT upgrades should have been live some time ago but require a resource who is currently neck deep in the aforementioned major infrastructure work. Until that is complete, QT evolution is on pause.

For a Wednesday, today’s fare is outstanding and genuinely has something for just about everyone. They race from midday until after 8pm; in Britain and in Ireland; on the fibresand and on the turf; on the flat and over jumps; from five furlongs to over three miles; and from Grade 1 to Class 6. Nice!

Today sees the first of a handful of trial lunchtime meetings: Southwell kicks off at 12pm and the Place 6 will be nearly won by the time the afternoon action gets underway. I’ll be getting stuck into plenty of it after a few days without a bet (two SotD losers aside, sigh).

And those of you who like to take a piece of the syndicate action will find something to join later on. To be brutally honest, last week was rubbish. Changing of the seasons and all that, but I was unable to – as the crass vernacular goes – find my own fundament with both hands… Expecting it to be better today.

The syndicates are via Colossus Bets, and if you’re still not familiar with them, you can check them out here. New customers get their first 72 hours’ stakes matched up to £100 in bonus play, which essentially means you can stake as much as £200 for the cost of £100. As always, please do check the terms and conditions and see if it works for you. I’m a big advocate of Colossus, as regular readers will know.

Elsewhere and there are three Grade 1’s at Punchestown. It’s a very difficult meeting for me, as the finishing order of the same horses under the same conditions from Cheltenham or Aintree seems to perennially reshuffle. Perhaps the way to play is simply to select one of the beaten horses at a price!

But there are also plenty of sprint handicaps with exposed form to look at; this is an area I’ll be personally focusing on in the early to middle part of the season. Using the filters at the top of the racecard menu is a great way to find the specific races you might be interested in playing. In the example image below, I’ve selected 5f to 6f, handicaps only. Easy as that. To see all races again, just hit the little ‘reset’ link beneath the search box. Simple dimple. 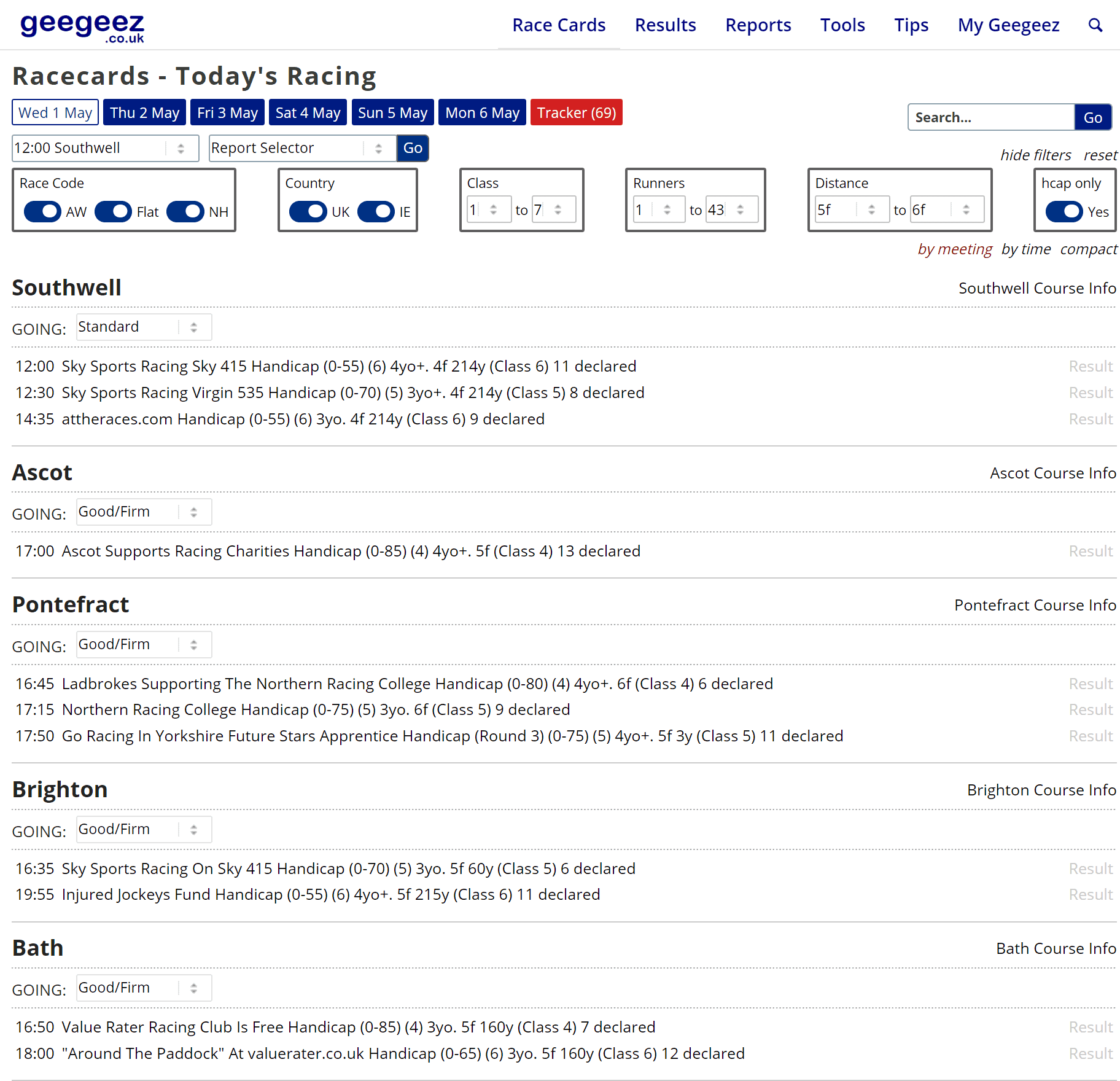 You may or may not have known about the race filter options in the image above. You may or may not know about any number of other little bells and whistles within the Gold tools and cards. It’s my job to ensure that you are aware of anything which may help you in your quest for fun and profit from your horse racing engagement!

To that end, we have the User Guide and some really solid video tutorial content on your My Geegeez page. If you haven’t checked those out, you ARE missing out, I promise you.

But, on top of that, I am going to try to do a race walkthrough once a week. It’ll either be video (most often) or screenshots and text, and it will start this week on Friday. I hope they’ll bring some of what we’ve got to life and, who knows, maybe even flag a decent winner or two along the way.

A Syndicate Horse for the Flat

Talking of Friday, I’ll be bound for Newmarket with the intention of acquiring a horse to run on the flat from the Tattersalls Horses in Training sale. I’ve agreed a shortlist to look at and potentially bid for, and I’ve identified a (new) trainer to condition the horse should we land one. Without giving the game away, he is based in a location convenient for many and has an excellent record with horses acquired from other yards.

My plan is to syndicate into ten shares and to hopefully enjoy some summer days/nights out on the flat with a shared runner.

I’ll reveal more as and when I can, but I’m excited about some of the possibles on the list – if one can be secured for what I feel is the right price.

Back in October last year, the Horseracing Bettors Forum, of which I am currently the Chair, invited responses to a survey on a wide-ranging set of racing and betting related issues. More than a thousand punters completed the survey – including many geegeez.co.uk readers – and the results were published yesterday in a 110 page report.

Now, you may or may not have the appetite for that sort of deep digest; regardless, you’ll find a skim summary at this page, and a slightly longer summary in the front of the actual report. If you’re interested in the state of betting in Britain today, I’d certainly encourage you to take a look. The skim summary is a two minute read, the longer ‘in report’ summary is a five to seven minute read, and the full report is an hour job.

Check it out here, and see if you agree with its findings

That’s all for now. Plenty to get your teeth into on site right now and coming soon. Tomorrow, I hope to have Jon Shenton’s next insightful analysis, which is the first in what may be a series around racecourses: it’s bound to be very interesting. Then on Friday I’ll share the promised race walkthrough; and perhaps next week I’ll have news of a new recruit to the horse syndicate team.