I was at Newmarket sales at the end of last week, and I put my hand up for one. He’s nice, and I’d be very hopeful he’ll provide a lot of fun. He’ll be going to a new trainer to the geegeez syndicate roster, a shrewd man who performs extremely well with his sales acquisitions. The plan is to syndicate this beautifully bred, exciting and unexposed horse – who cost 525,000 guineas as a yearling – into twelve shares. Read on if this might be of interest to you…

By top US stallion Speightstown, out of a well-related Listed-placed daughter of Galileo, it is no surprise that ELHAFEI made more than half a million as a yearling. He is a smasher, as you can see from the image below (click on it to view it full screen). He was originally sold from the prestigious October Book 1 sale at Newmarket in October 2016 and sent into training with John Gosden. 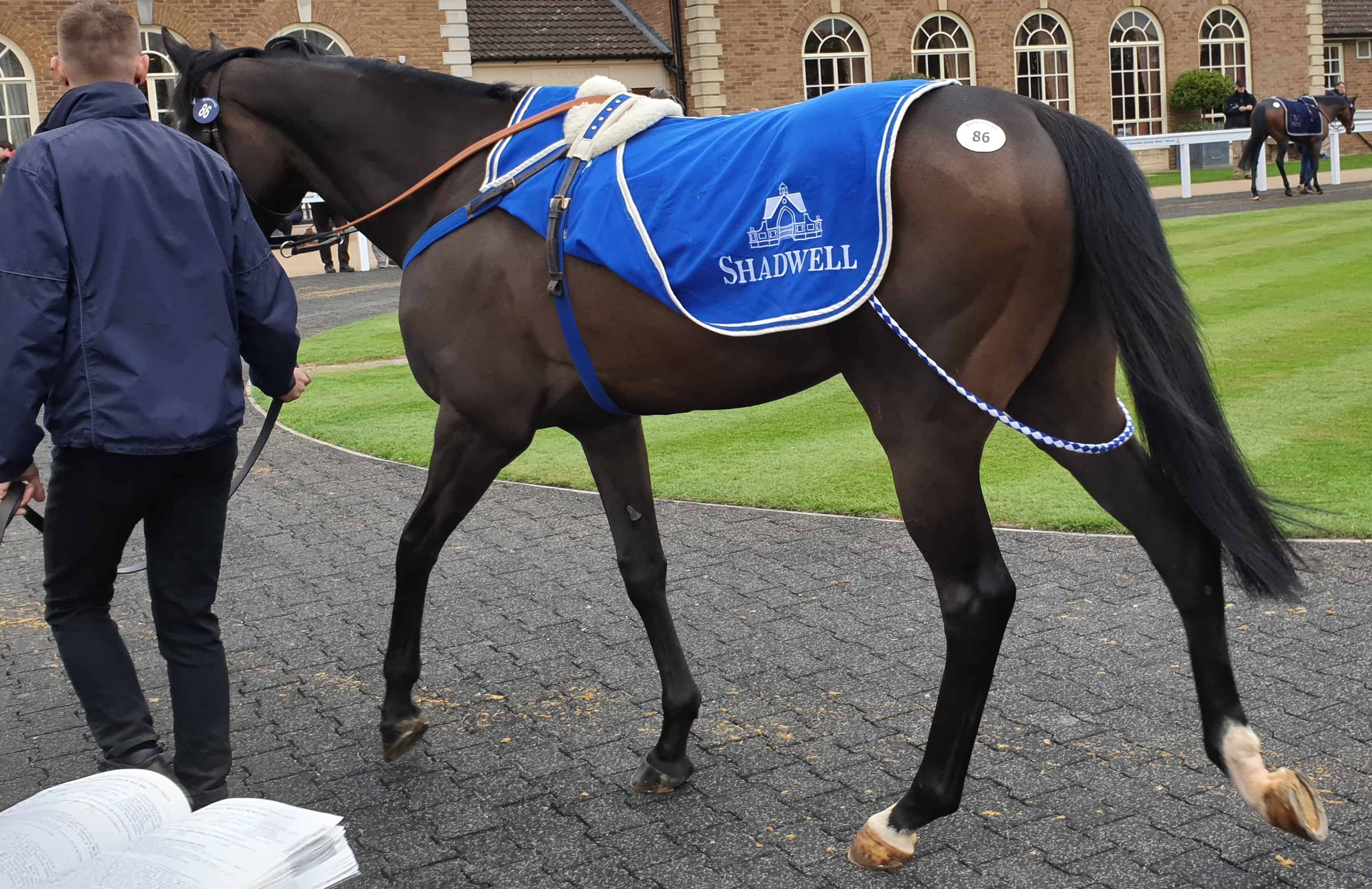 Elhafei parades before the Newmarket sale at which geegeez.co.uk acquired him

Owned by the al Maktoum family, he ran just five times in the colours of Sheik Hamdan’s daughter. The first of those was when a four length fourth of eleven at Lingfield 18 months ago. There, he was slowly away, swung wide into the straight and finished off very well. Horses behind him that day included Kassar, subsequently a close second in a Glorious Goodwood handicap and now rated 96.

That was November 2017, after which he was put away to strengthen before coming back in the famous Alex Scott Maiden at Newmarket’s Craven meeting in April last year. Sent off the 9/4 favourite, he finished fifth, beaten five lengths. In front that day were Ibraz (current OR 91) and winner Aurum (OR 100); behind were the likes of Epaulement (OR 97), Bawaasil (OR 88), and in total eight winners of 14 races subsequently.

Next up was a mile novice stakes at Newmarket in mid-May, where Elhafei finished an ostensibly disappointing 8th of 14. However, the form has turned out to be very good: winner Wadilsafa is now rated 112, second placed Herculean is rated 91, the third is rated 84, the fifth 105, the seventh 100. Elhafei was eighth. Behind him was Lexington Empire, now rated 89. The field has subsequently shared fifteen wins between nine individual horses. 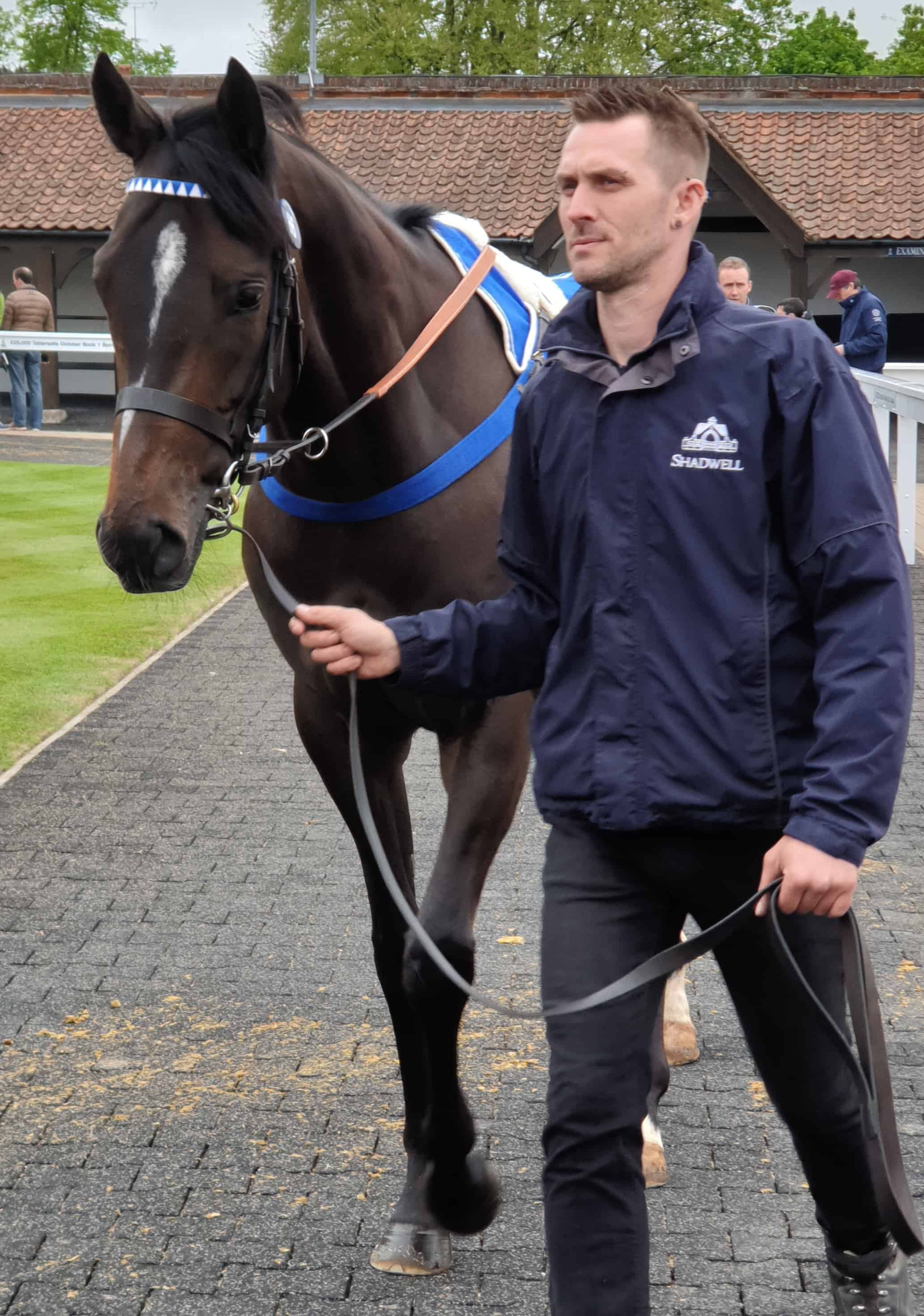 Elhafei is led around the paddock before going under the hammer, Newmarket, May 2019

That was Elhafei’s third start and thus earned him an opening handicap mark. Racing off 74 in a seven furlong Yarmouth handicap, he finished second of twelve to Beachwalk. That horse was subsequently sold for 55,000 guineas to race in Qatar. Behind Elhafei at Yarmouth were Arigato (now rated 83); Real Estate, a winner yesterday; and Nicklaus, now rated 93. The field has since won 13 races between them.

Elhafei had just one more race for John Gosden and his previous owner, when disappointing a little in midfield behind Icart Point and the re-opposing Arigato. Icart Point is now known as Speedy Luck having been sold privately to Hong Kong.

Since that time, Elhafei has been used as a lead horse for some of Gosden’s younger inmates. That tells us three things:
1 he has had no injury problems (though he has been gelded since his last run)
2 he is no slouch as he’ll be leading Group-class juniors (!)
3 he is at least partially fit – as you can see from the images – meaning we’ll hope to be on the track sooner rather than later

But who will train him?

Regular readers of geegeez.co.uk will know I’ve always been a very keen student of trainer form, and particularly of trainer specialisms. Our chosen trainer is a dab hand with horses purchased from the sales, especially when they have low mileage and a potential kink to iron out. In the case of Elhafei, there are no kinks, though he was apparently not a ‘good grubber’ according to our man at Clarehaven Stables. That can happen at bigger yards where a one size fits all approach is adopted; so one needs a handler who takes the time to get to know exactly what is required to elicit improvement from a happier horse.

Step forward Michael ‘Mick’ Appleby. Mick is brilliant at eking out more from his horses, and I was amazed when I went through a few of his more recent sales purchases. Take a look at the below:

Of course, there are examples of horses which haven’t gone forward and that’s the chance every buyer at the sales takes. We are no different. But, in purchasing a horse with form which is probably a few pounds better than it looks, and in selecting a trainer who has a proven track record of success with such types, we give ourselves the best chance of some fun!

Mick is based in Rutland, in a village called Langham, which is conveniently central for a syndicate whose members may be scattered across the land. I’ve not yet been to visit but hope to go in the next fortnight to see how Elhafei is settling in.

Elhafei will be syndicated into twelve shares and he will race on the flat, both turf and all weather. The syndicate will run for one full year with the intention of offering him back at the same sale next year unless a unanimous vote elects to retain the horse. This way, all members know the extent of their financial outlay at the beginning, and can expect a return at the end of the term (assuming the horse is sold).

Approximate costs are as follows:

Total: £48,000 excluding the VAT which will be reclaimed and used to support the funding of the syndicate.

N.B.: The horse will not be insured. Individual syndicate members have the option to insure their share if they’d like to.

A full syndicate agreement is available by contacting me via the Contact Page here.

What do I get?

As well as being a fully fledged (part-) owner, your horse is your passport to the inner circle of racing. You will be able to visit the Mick Appleby yard, both on scheduled syndicate visits and, by arrangement, at other times convenient to you.

Further, you’ll receive news and updates on Elhafei’s progress, running plans and performance expectations (perhaps I should say aspirations – nobody has a crystal ball!).

And, of course, you’ll be able to attend Elhafei’s races as an owner, with all the privileges that go with that: access to the Owners’ & Trainers’ lounge, the parade ring and owners’ viewing facilities. If/when your horse wins, you’ll be able to stand in the winner’s enclosure and have your photograph taken before enjoying a glass of fizz and watching a re-run of the race.

At the end of it all, we hope to have many great days at the races and memories to cherish. From any prize money won and from the sale of the horse at the end of the term, there will be a dividend payable to all twelve syndicate members representing 1/12th of the account balance. Although, as you can see above, some lucky owners in Mick’s yard have enjoyed a positive return on investment, nobody should view this venture as part of an investment portfolio.

I know I don’t need to say that, but I want to be absolutely clear: this syndicate is offered as a leisure activity which has some potential to offer a return. The strong balance of probabilities is that the return will be less than the entry fee; but that is not really the point. The point is that, through Elhafei and Mick, we have a chance to get a lot closer to the sport we love, to dare to dream a little, and to cheer our lad home whenever and wherever he runs.

As I’ve stated, there are twelve shares available. As I always do, I will be taking one; I have informal interest in four more without having mentioned this outside of a couple of chats with friends (who happen to be in other syndicates as well – you also get to hang out with me if that isn’t a disincentive!!). I’d like to get the syndicate framed as quickly as possible so we can get on with the business of enjoying the ride, starting with a stable visit probably around the beginning of June.

If you have any questions, would like to view the syndicate agreement and/or if you’d like to reserve a share, please drop me a line via the contact form here. I’m really excited to be involved in a horse on the flat this season, and to have it trained by someone as capable as Mick Appleby, and to be able to share that buzz with like-minded geegeez readers.

So do get in touch if this is an opportunity for you.