Where has this week gone? Seems to have whizzed by with half the things I had planned still undone. Such is life. Anyway, one of those things is/was a preview to showcase some of the Gold features, and this week it is in the form of a post rather than a video.

In truth, it’s a very middling Saturday overall, falling as it does between Epsom’s Derby meeting and Royal Ascot; but there are some interesting contests all the same, none more so perhaps than the ten-runner Essex Sprint Handicap (Chelmsford 4.15).

It’s a high class and competitive field where a decent price can be obtained about any of the runners, as can be seen below: 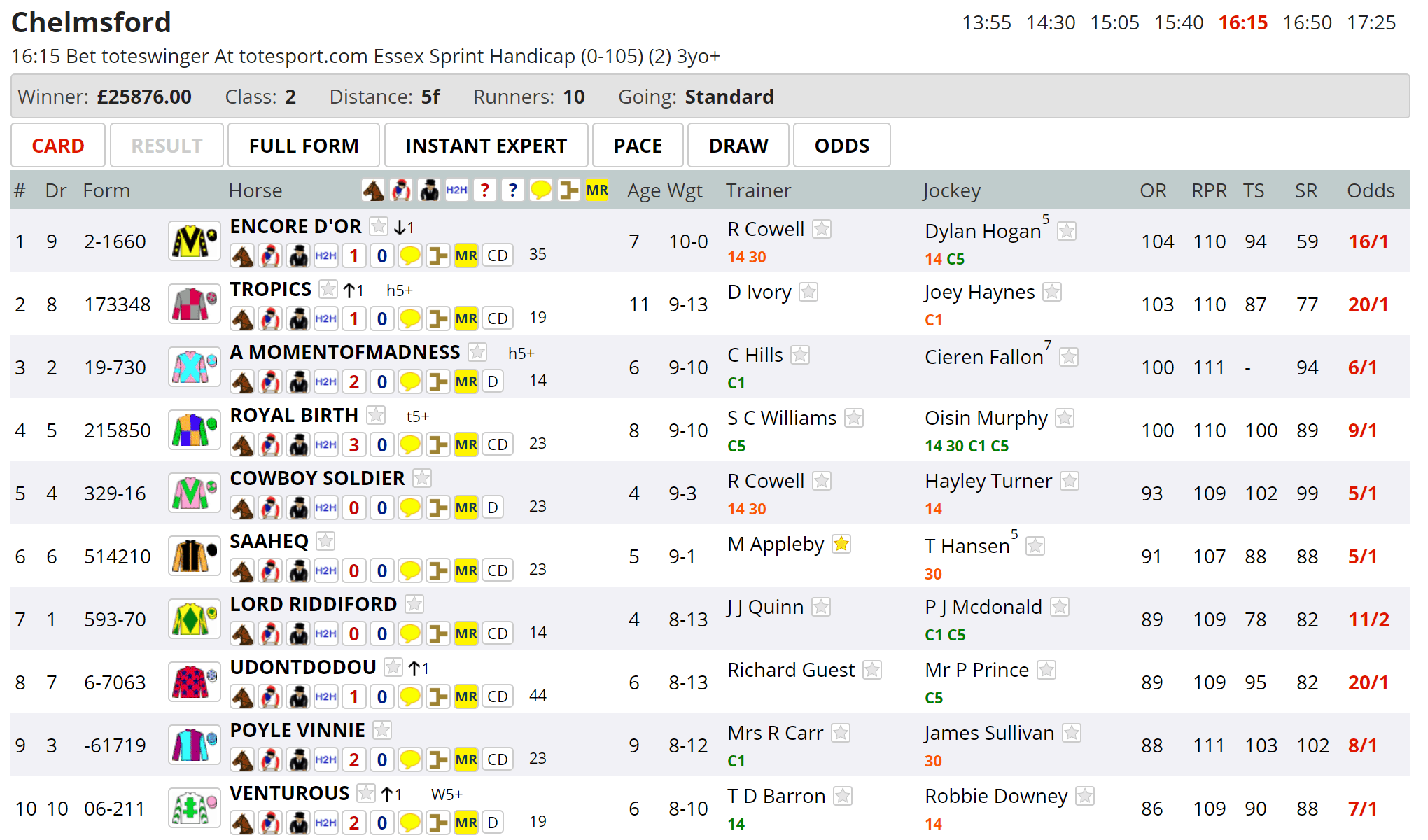 Chelmsford, or Chelmo as I like to call it for no better reason than I’m lazy and somewhat casual, is a speed-favouring track generally and, with the recent rain, it should ride that way today. [That’s a good general point to note: all weather tracks can ride deeper, slower and more stamina-sapping when there’s been a protracted warm spell, and they can ride a bit faster and more speed-favouring when it’s been wet. That’s no more than a general rule of thumb but it’s certainly worth factoring in to all weather pace calculations].

The five furlongs is around a turn as can be seen below:

Riders have about a furlong and a half before the first turn, then approximately the same again through the turn, before a straight of around two furlongs. Those racing handy generally have the best of it as the PACE tab highlights: 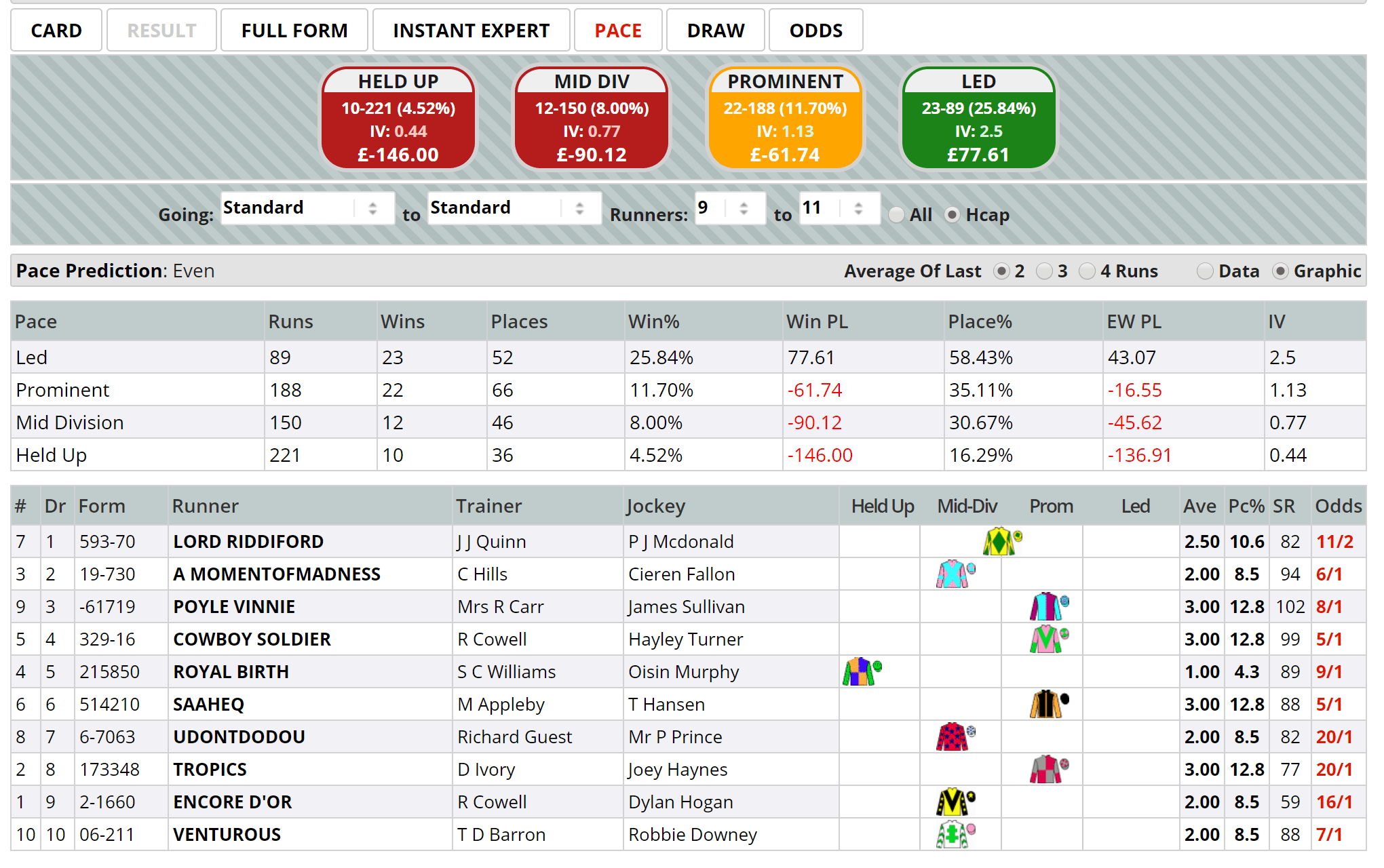 Note the green blob for the LED run style and the amber blob for PROMINENT racers. Those coming from further back have found it difficult to wear down the trailblazers in this sort of field size (indeed, in all field sizes) here. The Impact Value (IV) of 2.5 means front runners are two-and-a-half times more likely than random to win, and the healthy profit of £77.61 on 89 bets is tidy, too.

Of course, the challenge is isolating the front-runners and, as can be seen in the pace map, there is no obvious early leader. In fact, all we really know is that Royal Birth is going to have to do it the hard way!

I’ve sorted the above by draw (see Dr column on the left hand side), and when we look on the DRAW tab, we can see another of those negative biases. 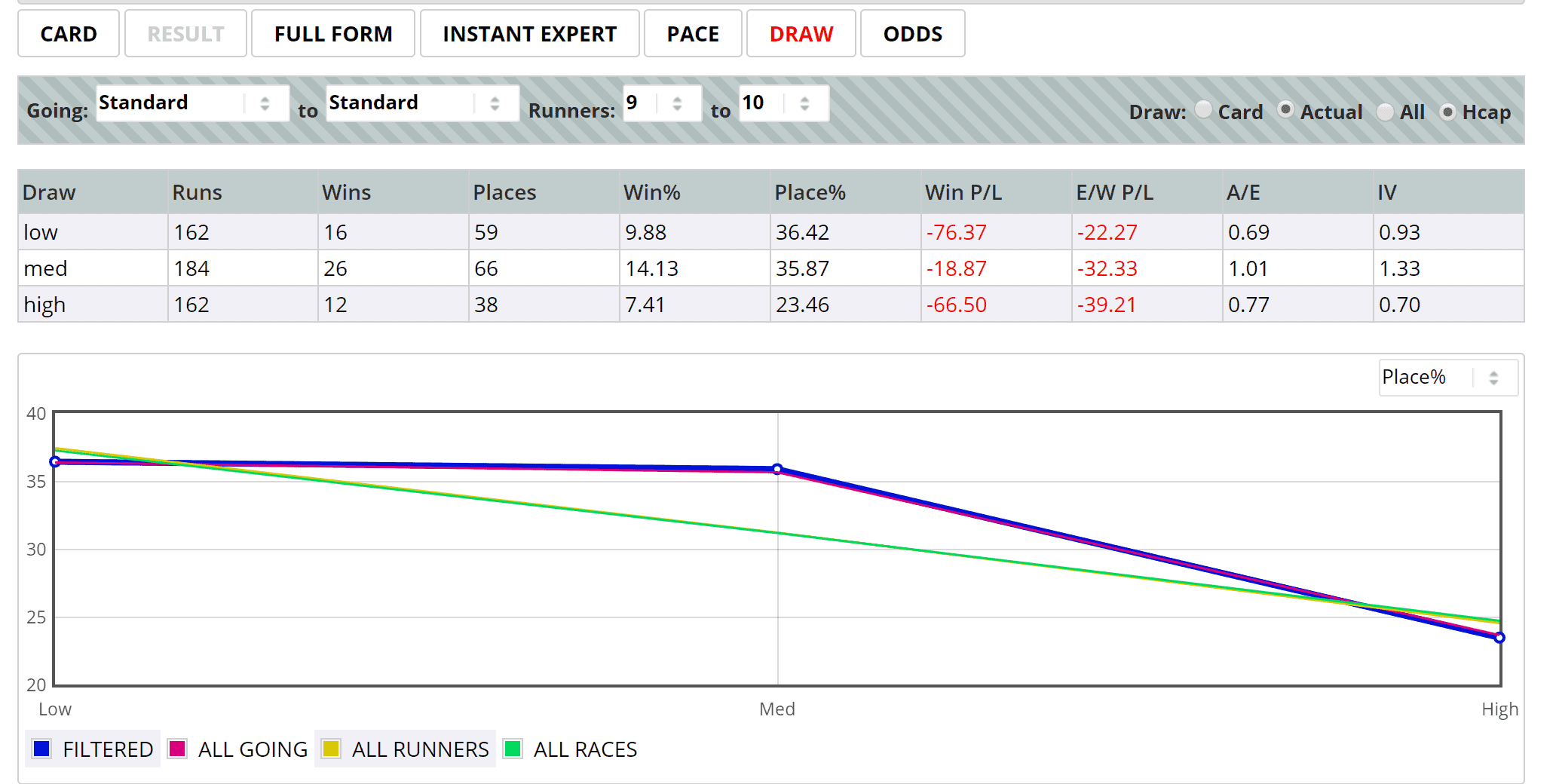 I’ve talked about the importance of looking beyond positive influences in the draw previously and this is another case in point: the outstanding feature of the table and chart above is the difficulty wide-drawn runners have of surpassing their more conveniently-berthed insiders. Looking at the course map above shows the logic behind that: outside racers will simply have to cover more ground, which takes longer!

Naturally, as I’m fond of saying, any horse can win any race; but the balance of probabilities suggest that we can eliminate a wide runner unless it has early pace in a race which might allow it to get to the front. See below Draw/Pace heat map: 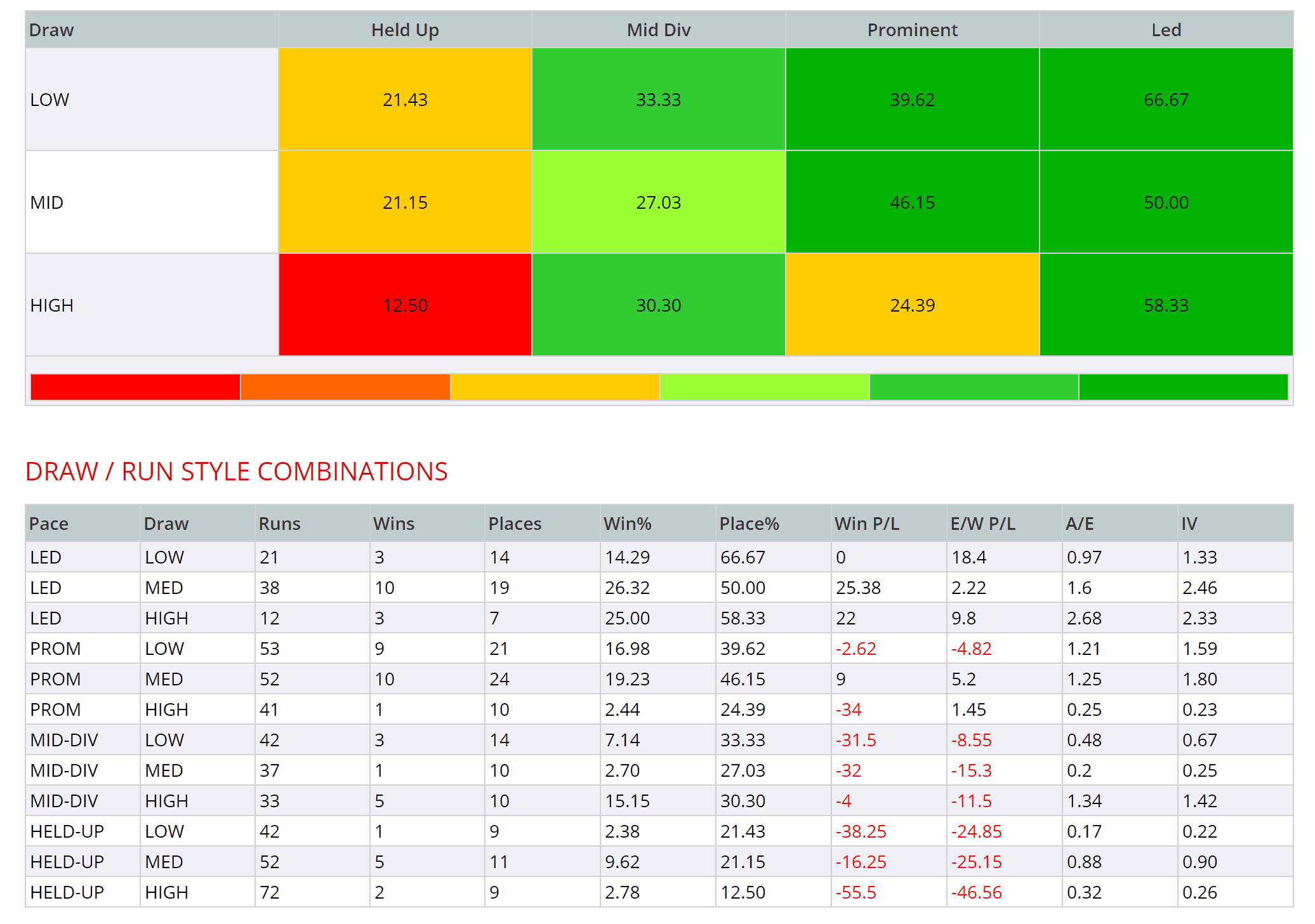 This view, sorted by Place %, shows a beautiful diffusion of colour from top right to bottom left – that is, from drawn low and led to drawn high and held up.

As can clearly be seen, those leading from any draw hit the frame better than half the time. Those drawn in the bottom third can save ground and be ridden a little more patiently awaiting the gaps to appear when a race is quickly run. Those held up from a high draw are generally hosed.

Well, in a tight little handicap like this, I know I’m looking for some early speed and discounting the widest drawn unless they have a chance to lead. Based on the above I think that makes it tough for Encore d’Or and Venturous, both of whom otherwise have reasonable form credentials as can be seen from the below INSTANT EXPERT two year win record in AW handicaps for the field.

The other negative, ostensibly at least, is Royal Birth, whose win record is very poor: that’s a factor of his run style and though he’ll be finishing best, I don’t like this kind of perennial ‘unlucky’ loser. They are not unlucky, they are money leeches! [Cue easy win for Royal Birth!!]

Of the rest cases can be made for almost all of them, with the one I initially favoured being the unexposed Cowboy Soldier. However, when I checked his trainer’s recent form – flagged to me by the red digits by his name on the card – I didn’t like what I saw:

0 from 47 in the last month (0 from 19 in the past fortnight), and a far lower than average place rate to boot, suggests all is not well Chez Cowell currently. I hope he breaks that run soon but I couldn’t possibly wager that it will be today at 4/1.

The one I have landed on is Poyle Vinnie. The Full Form tab shows his consistency at the track (Course filter selected) : 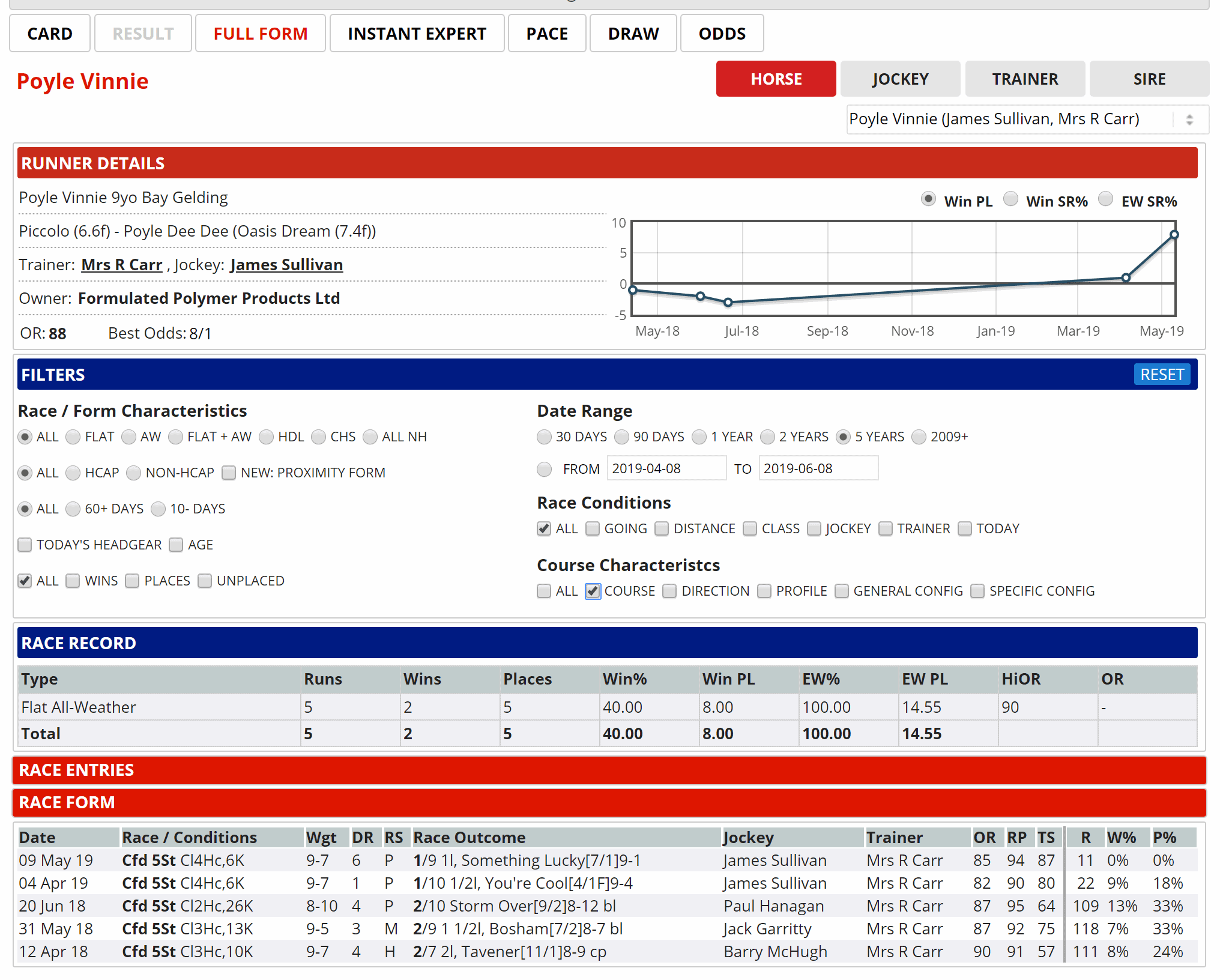 Granted, most of that form is at a lower level, but he was second in a similar class and value race last year off a similar mark. Importantly, his prominent style (see the PPP in the RS column) and a draw in three mean he’ll be able to track whatever makes the pace and might go close to winning for a third time in a row over course and distance. 8/1 is perfectly fair.

At bigger prices, I thought old boy Tropics was playable for pennies win and place, as well. Drawn in eight, he has a chance to get handy with no burn up suggested by the recent history of the field. He won this race last year, drops back to five furlongs and was a winner that last time he raced over course and distance, in January. 22/1 is quite big.

So there you have it…

I started with the track, and what I need to know about it in terms of constitution and its impact on draw and pace; then I looked at those inconvenienced by that; and then I focused more on the form profiles, before checking contextual runs (course and distance) and trainer form.

All possible from within the racecard and, when not explaining it in 1000 words, about eight minutes to arrive at a fairly optimistic wager.

Win, lose or draw, if you follow this approach, you’ll know more than almost everyone betting on the race; and that means over time you’ll come out in front.