Form is temporary, class is permanent; so goes the old adage.

Whilst that is demonstrably true in most walks of life, including horse racing, I wondered if there was a way for punters to profit from it. I’m not talking here about the yins and yangs of weekly or monthly form cycles, but rather those tempora horribilis that leave the license holder despairing for his or her livelihood.

These longer cold spells are often as a result of an as yet undetected microbe uncomfortably cohabiting with the equine residents. Such bugs are not respectful of reputation and strike down yards large and small on a frustratingly frequent basis.

When a stable is succumbing to ‘the virus’ it has no choice but to sit tight and sterilize, praying for an early reversion to the norm. But what should we as punters do about such situations?

Inspired, if that’s the right word, by a recollection of Philip Hobbs’ tough season in 2017/18, I wondered whether such protracted poor form left its mark on the betting ring; and if, as a consequence, it was possible to take advantage of this temporary blind spot.

Here’s what I did next…

What follows is somewhat arbitrary but is designed to ensure reasonable sample sizes and sensible periodicities. Taking the 2014/15 to 2018/19 seasons (five), I looked at all trainers with at least 150 UK runners in that time and a strike rate of 17% or more overall. I used the excellent facility at horseracebase.com to do the crunching.

These are the trainers, along with their overall records for the period in question:

The overall profit / loss at Betfair SP, and with 5% commission applied, is -655.60. It goes without saying that’s not ideal, though it represents a negative return on investment of just -2.9%.

From that list, I compared each trainer’s overall five season win rates and Actual vs Expected figures with their individual season records. And, from that, I identified those seasons which were either their worst in the sample period or more than 3% net worse than their five season average; and I separately identified those seasons which were -0.1 or greater away from the five-season A/E figure.

Those tables look like this, with the negative outlying season figures highlighted in yellow cells. 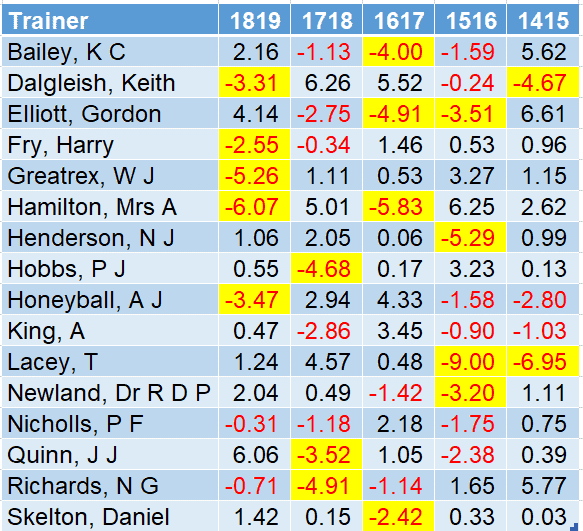 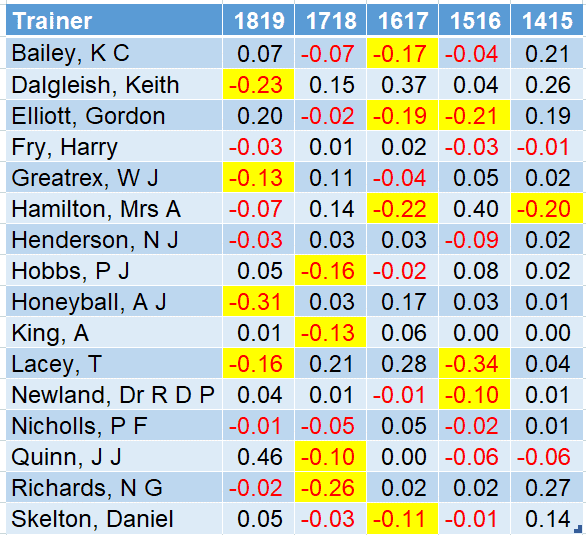 Unsurprisingly, there is a similarity between the shaded cells in the two images, but they are not the same. As such, it makes for an interesting comparative when attempting to gauge the utility (or otherwise) of following stables the season after a difficult campaign.

The hypothesis goes that, through a combination of punter disaffection and downward-moving handicap ratings, following trainers in the term immediately prior to a poor season could prove profitable; or, at the very least, less loss-inducing.

Blanket coverage of any yard is generally not advised, so aspirations were initially camped towards the ‘less loss-inducing’ end of the P/L spectrum.

The task then was to take a trainer’s figures from the season following a ‘yellow cell’ campaign, and add those to a new performance table. I did this for both the win strike rate group and the A/E group.

The results for trainers highlighted by win strike rate are as follows:

These figures are remarkable given the profile of a number of the trainers contained in the sample. What is even more remarkable is that, last season, all three of Messrs Hobbs, Quinn and Richards were in the black at Starting Price.

Overall, the profit from blind backing these win strike rate ‘tough season’ trainers in the following season was 214.27 points at Betfair SP, after commission. That represents a not immodest ROI of 6.64% on more than 3000 bets.

Actual vs Expected ‘Next Season’ results

The results for trainers whose ‘tough season’ produced a dip in A/E of -0.1 or more from their overall five-term figure were as follows in the subsequent campaign:

This more betting-focused approach produces strong parallels to the previous section, both in the trainers/seasons contained in the table and, related, in the bottom line. In this case, there was a Betfair SP profit of 216.72 units, negligibly above the ‘win rate’ surplus. However, those profit points were accrued from roughly 200 less bets, thus making for a slightly more impressive return on investment of 7.19%.

It bears repeating that there is significant overlap between the ‘Actual vs Expected’ cohort and the ‘win strike rate’ one. Nevertheless, the two approaches are subtly different: the first focuses more in terms of absolute winners, the second fixes its gaze on the market.

Ten of the twelve A/E trainer seasons were replicated in the ‘win strike rate’ table. Given that overlap and the commensurate bottom line similarities, it may be that the approaches are somewhat interchangeable, though it is logical that the method which focuses on market (A/E) ought to be the better way forward.

The fundamental question I was trying to answer was, “are trainers who have bad seasons worth noting in the next term?”. Whilst the definition of a ‘bad season’ is arbitrary and others will have a different notion of what constitutes one, the general principle appears to be that it is reasonable to expect high strike rate handlers to revert to (something like) the level of success they previously enjoyed.

There are occurrences – see Elliott and Lacey on the win rate table – of two notably below par seasons in a row. And there are sequences of more than two below par seasons, though not sufficiently poor to trigger my not-quite-random yellow box thresholds. In short, there be variance hereabouts. And there be a small sample of trainers and seasons, and there be some outliers in the winners which are magnified on Betfair by their distance from the top of the betting lists.

Enough with the pirate speak, here’s the rub: the yellow cells for trainers who endured a tough season in 2018/19 might be expected, as a collective, to fare a good bit better this term, perhaps even turning a profit at exchange starting price. As such, Harry Fry, Anthony Honeyball, Keith Dalgleish and Warren Greatrex may be worth marking up as late summer morphs into autumn and for a while at least thereafter.

Stat of the Day, 5th September 2019 Shares Available: 3yo Ready to Run
Scroll to top