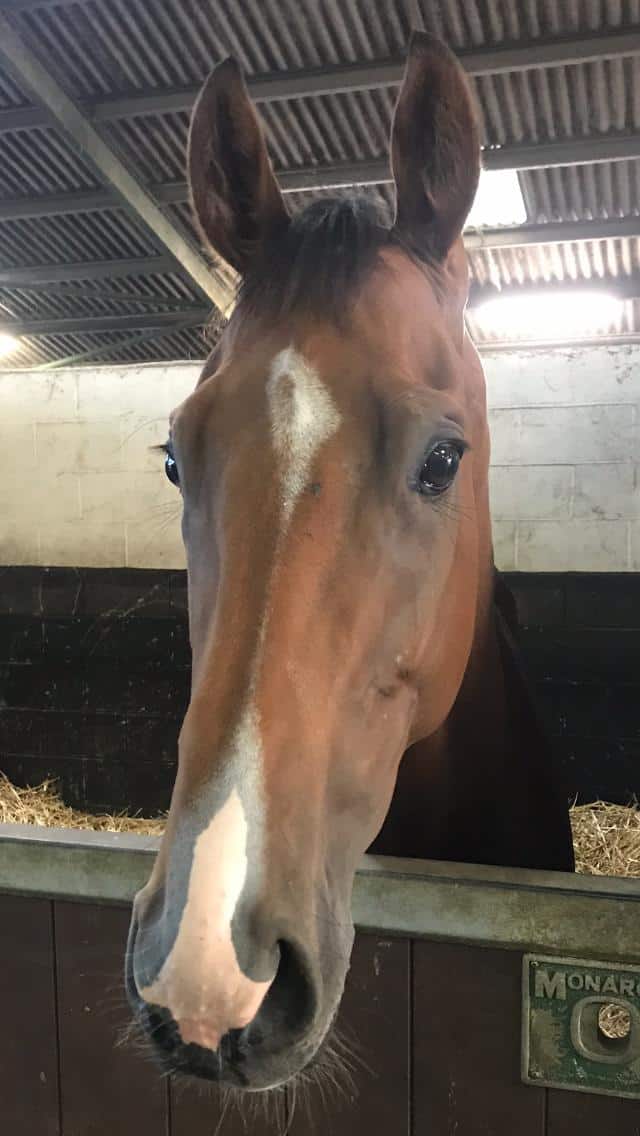 Forseti happy in his new stable

geegeez.co.uk is excited to have acquired a horse from the recent Ascot August Sale, shares in which are available right now.

This is your chance to get closer to the racing action, as an owner with all that that entails.

Details of the horse, trainer and syndicate are below. Do have a read through and get in touch if you’re interested.

Formerly trained by Andrew Balding, FORSETI has won three of his ten starts to date including on his penultimate run for his previous trainer. By triple Group 1-winning stallion Charm Spirit out of a Raven’s Pass mare, he cost 60,000 Guineas as a yearling.

Five runs at two saw him win on his second start in a Salisbury maiden (made all) before running an unlucky seventh of 17 in the Glorious Goodwood nursery (comment: Athletic; looked well; steadied and bumped leaving stalls, held up in rear, closed when not clear run and switched left well over 1f out, headway and not clear run again briefly inside final furlong, stayed on well towards finish).

This season, as a three-year-old, Forseti won on his first run, at Lingfield against two horses now rated 80 (and subsequently sold for 70,000 Guineas to race abroad) and 83. That remains his only start on an all-weather track, so he is unbeaten in that context!

Two moderate runs at Chester, one of them on soft, followed and it might well be that he simply doesn’t get on with the very tight track there. Indeed, as can be seen from the below image, his best form is on straight tracks.

He was then dropped in grade and won as he liked, easing a length and a half clear of the second, with four lengths back to the third. While that wasn’t much of a contest he came from last to first and won going away. Moreover, his previous owners went to £14,500 in the public auction afterwards to retain him.

A single run since, in a big field mile race where the hood was left off for the first time in his career, was his worst and is a ‘chuck out’ in his overall profile.

Indeed, as the image below shows, he seems to have a preference for a straight seven furlongs. Even when he won over a mile at Lingfield, it was a steadily run race where a change of gear was the key attribute.

Before acquiring FORSETI, I spoke to David Probert about the horse, and he told me:

He’s a good mover and wind is clean; he might ideally need a mile and wears a hood to help him settle. He is probably better than 77 [Official Rating]. 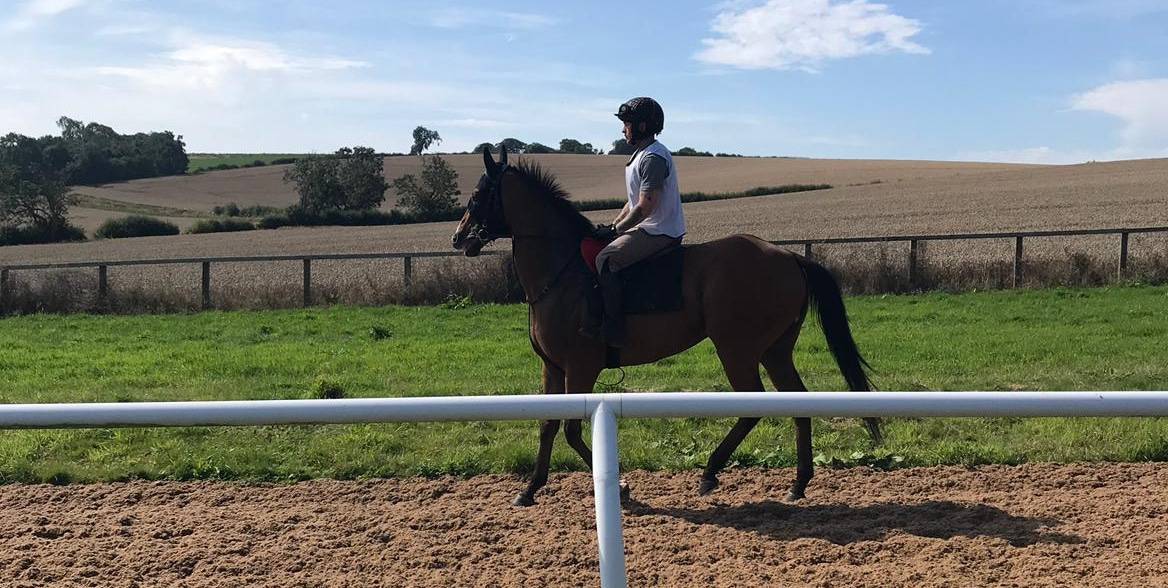 Forseti having a good look around his new garden!

Despite being a buzzy type who wants to get on with his races, Forseti has done best in smallish fields, though he has also performed creditably both times in bigger fields where he’s been able to settle slightly better off a stronger pace.

My suspicion is that a big field straight seven, where he might switch off at the back and be delivered late, could be ideal. But, as we get to the later stages of the turf season, I also have an eye on an all weather campaign, Lingfield perhaps ideally suiting that change of pace.

In case you are wondering, FORSETI is the Norse god of justice and reconciliation, so wikipedia tells me…

A hammer price of £12,000 (+VAT) seems very fair for a sound horse with a 30% win rate, untapped potential in a couple of areas, and who is pretty much fit and ready to run.

STOP PRESS: FORSETI has an entry to race next Tuesday at Catterick. If he wins, he will return half of his purchase price almost immediately! 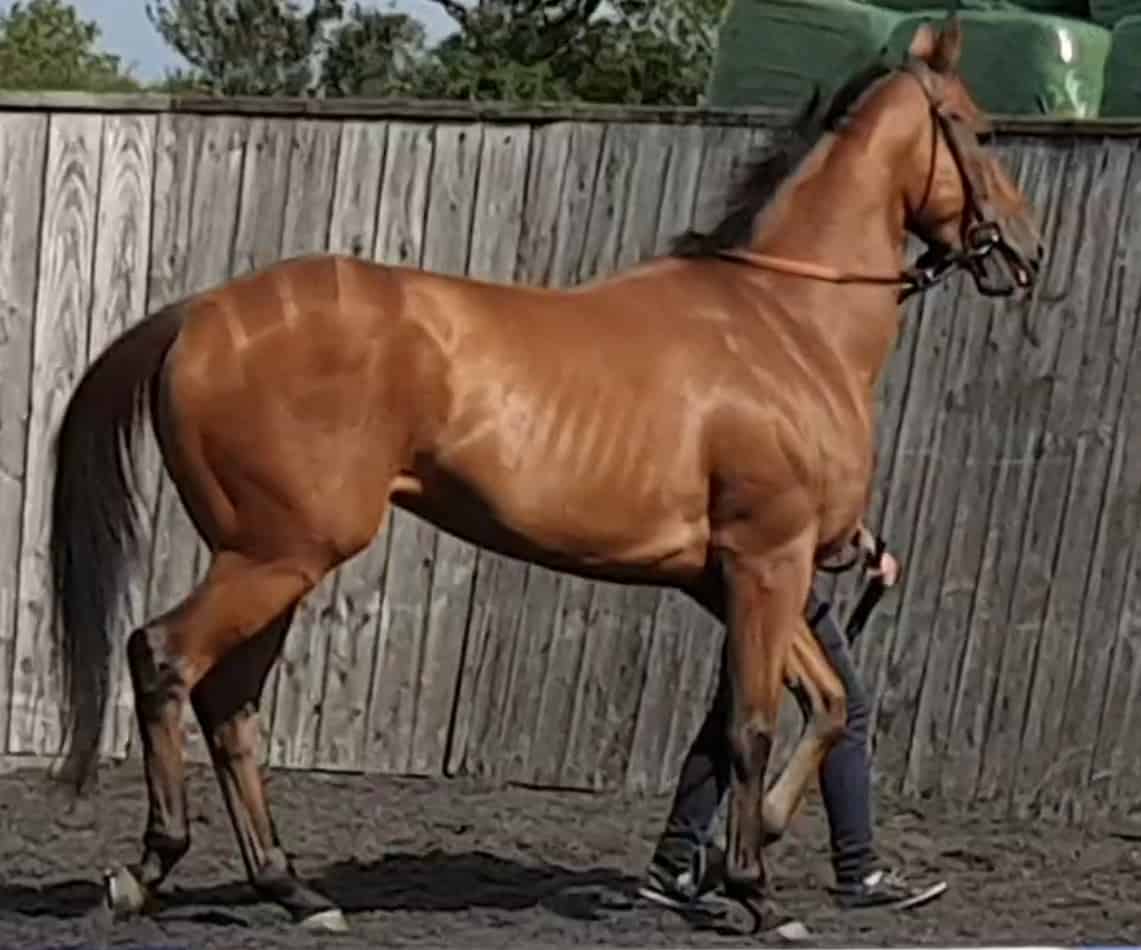 FORSETI is fit and ready to go!

FORSETI will be trained by Mick Appleby in Langham, Leicestershire. Mick was last year’s all weather Champion Trainer, so there will be no concerns about our horse not running through the winter.

Mick’s forte is improving horses from other yards, and almost all of the horses he trains win at some point, many of them multiple times before being sold on at a profit. He is the fourth trainer on the geegeez.co.uk roster, and this is our second horse with him, alongside Elhafei (about whose all weather prospects we are excited).

Mick’s record can be viewed here.

The plan is to race FORSETI up until either May or July 2020 – a period of nine or eleven months – before sending him back to one of the Newmarket sales held in those months. That makes for a known financial commitment and an easy ‘exit strategy’ at the end of the term. It also gives us most of a year of fun and a chance of a return at the end of the period. NB if you’re considering that as a factor in getting involved, you should plan for a negative return, and only hope for a positive one!

FORSETI is syndicated into TEN shares, each costing £3,000. That includes VAT, which will be reclaimed by the syndicate and used to fund training and racing expenses. All expenses are fully transparent and no ‘admin charge’ is levied on any geegeez.co.uk syndicates.

That contribution will take us to the May sale, at which point we will decide whether to continue for another two months, funded either by prize money won or a further contribution of around £400/member. If agreement cannot be reached, he will go to the May sale.

Syndicate members are, of course, entitled to their pro rata (10%) share of any prize money and sales revenue accrued by the horse as well as any residual funds in the account, after all training, racing and sales expenses have been accounted for.

Furthermore, syndicate members will be entitled to an owner’s badge whenever our lad runs, and I will arrange a yard visit some time in September or October. Members may go to the yard (by appointment) outside of the formal visits to watch FORSETI work.

The horse will NOT be insured. Individual syndicate members may considering insuring their share and I can provide details of insurance brokers if that is of interest.

I already have SIX firm commitments for shares, meaning TWO remain (I will update this figure as new commitments come in).

To express your interest and request a copy of the agreement, click here to email me.

Bouncebackability: Profiting from out of form trainers Rodriguez Returns After Enforced Absence
Scroll to top