The brilliant mare Enable has drawn stall nine in her bid for an unprecedented third Qatar Prix de l’Arc de Triomphe victory this Sunday. Expertly conditioned and campaigned by John Gosden to win thirteen of her fourteen starts  – and all of her last twelve, the five-year-old daughter of Nathaniel is a solid odds-on favourite in the dozen-strong field.

If Enable has form and ability in her corner, she has the weight of history resisting her three-peat attempt. Just eight five-year-olds, and only one of them a mare, have beaten their younger counterparts in the 97 renewals of this European Championship event. The sole previous winning mare of Enable’s age was Corrida in 1937.

Her main competition is likely to come from French and Irish three-year-old colts, Sotsass and Japan respectively. Sotsass has the inside berth, not necessarily a blessing if horses peg him in against the rail, so jockey Christian Demuro may need to be ready for any gaps that appear in the straight. Fortunately, his horse – a son of the Aga Khan’s Siyouni – is equipped with a withering turn of foot. If the race is tactical it may suit him.

Japan started the season tentatively with a middling effort in the Dante ahead of an ultimately unlucky tilt at the Derby. There, his rider Wayne Lordan dropped his whip and was beaten half a length into third. While it may be questionable whether he’d have won otherwise, what is not in doubt is the progression shown by Coolmore’s latest Galileo stallion-elect since. A near five length romp in the Group 2 King Edward VII Stakes at Royal Ascot was followed by narrower verdicts in the Grand Prix de Paris and Juddmonte International, the former on this track and at this trip, the latter against the formerly highest rated horse in Europe at that one’s (Crystal Ocean) favoured distance. Rested since York in late August he comes here fresh and is drawn adjacent to Enable.

The Charlie Appleby-trained Godolphin runner, Ghaiyyath, is hard to weigh up. His 14 length annihilation of the Grosser Preis von Baden field last time, if taken literally, puts him right in the frame; but a five length defeat to Waldgeist in the Prix Ganay gives him a lot to find. He bids to emulate another Godolphin entry, Marienbard, who took the same Baden Baden Group 1 en route to Arc glory in 2002. Incidentally, Marienbard was the last five-year-old to prevail.

Magical has finished behind Enable four times, the first of which was in last year’s Arc, and she looks to be playing for a place once more. That is no forlorn hope for a filly who won the G1 Irish Champion Stakes (1m2f) last time and is fully effective at this longer trip.

This is a home fixture for the seemingly poor traveller, Waldgeist. Six trips away from France have yielded six defeats, while on home turf he’s won eight of 14, including  three Group 1’s. Another with place claims, he doesn’t look quite up to winning.

The rest are mammoth prices, and the pick of them might be French King and Nagano Gold. The former has won his last four, all at a mile and a half and all outside France. He comes here unbeaten in 2019 and represents the sponsors.

Meanwhile, Czech bargain buy Nagano Gold, who cost just 3,500 Guineas in the Tattersalls December sale of 2014, looks touch of each way value. While he finds winning hard, he’s run excellent placed efforts at Deauville, Ascot and Longchamp since winning a Listed race over this course and distance in April. There are certainly worse long shot bets, and he might give Hail Mary players a run for small money.

In what promises to be an exhilarating renewal of the Qatar Prix de l’Arc de Triomphe, wagering allegiances aside, the world will be cheering for the plucky and high class mare, Enable, in her bid for immortality. Allez Enable! 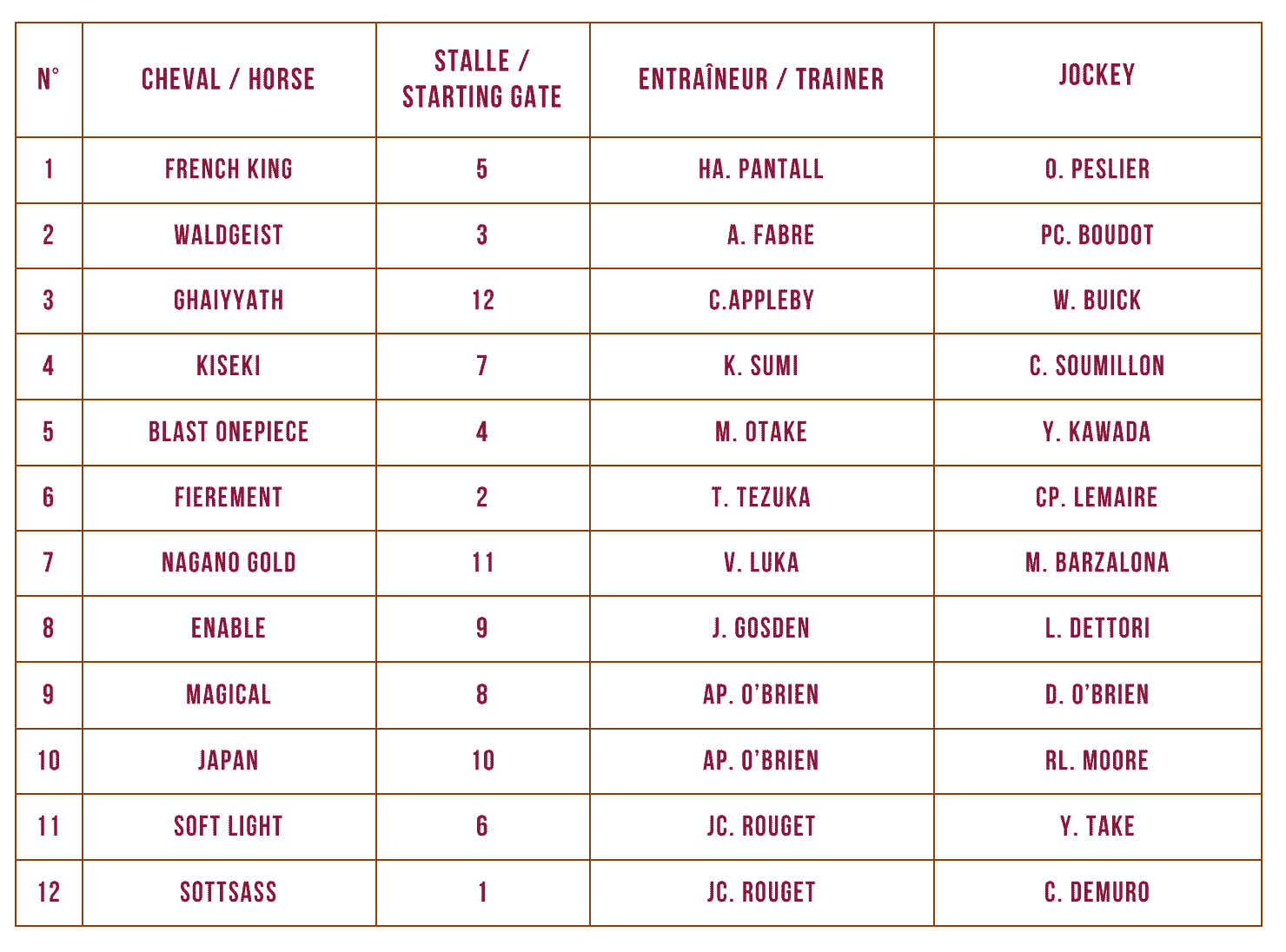