This is a one and a half mile handicap on the all weather surface at Newcastle, with just the six runners.

Genres is the short priced favourite at a current 13/8 and was a good course and distance winner last time out. Joe Fanning takes the ride today, and he has be in very good form of late, being placed in almost half of his races over the last two weeks.

The Shortlist is the report that is free to all users on a Tuesday, and the only two horses to appear on it today (on the win setting), both run in this race.

Major Rowan is the outsider of the six, but he has a score of ten on The Shortlist, with three sections of green and one of amber. His one grey section is for Class, as this is quite a step up for him.

High On Light is the other runner on there, with four sections of green and one of red. Again, her poor section is for the class, although she was second last time out over course and distance in a 0-75 handicap, and is just the one pound higher here today. A repeat of that performance would surely see her go close.

The Instant Expert tab highlights the good showing for both Major Rowan and High On Light, but it accentuates the task on hand for Major Rowan, as he is now 13 pounds higher than his previous winning mark.

Genres has been raised six pounds for latest course and distance win, however if he is rediscovering his old form that may not be enough to stop him. He was rated as much as 18 pounds higher than is current mark as a three year old.

Runners that are held up have the best record here over this distance, as can be seen from the Pace tab. Over 12% of them have gone on to win the race, for a level stakes profit of 31.33 from 129 runners.

Both Major Rowan and Genres definitely like to be held up, and it appears they are likely to be at the rear again today with the other four runners all quite handy usually in their races. 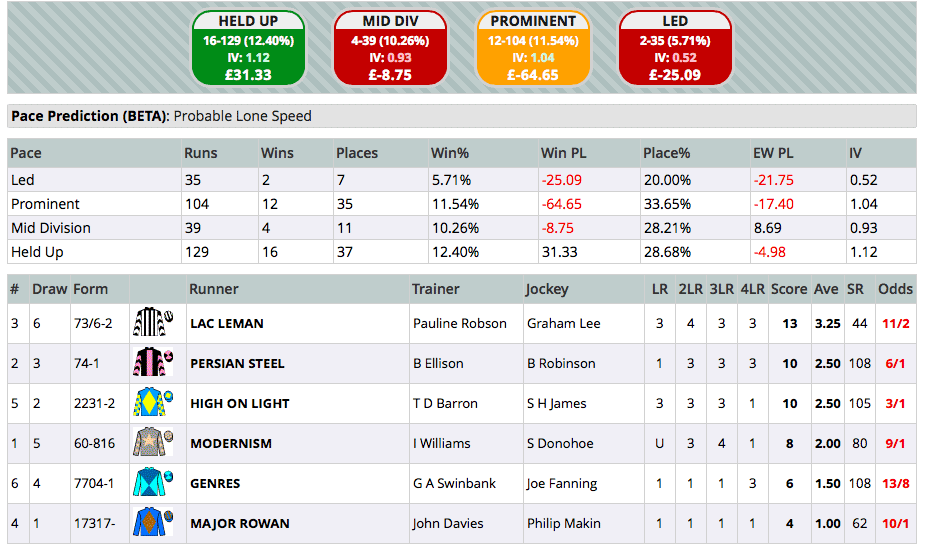