The Horses For Courses report is available to all users on a Friday. Today it shows that Rock On Dandy has a good record when racing at Dundalk, as from five runs there he has won and been placed three times (60%) for level stakes profits of 19.83 and 23.29 respectively.

He runs in a one and a half mile handicap there tonight.

Rock On Dandy was a winner here at Dundalk last time out over two miles, winning comfortably by over two lengths. He won twice over course and distance in December but does have an extra six pounds in the weights to contend with today after his latest win.

Trainer Fergal Birrane has been among the winners recently from the few runners that he’s had. Over the past 30 days, he’s managed two winners (40%) and three places (60%) from five runners, for level stakes profits of 6.33 and 19.16 respectively and an Impact Value of 3.26.

Dylan Hogan takes the ride today and claims five pounds (as did Denis Linehan last time out) and over the past couple of weeks he’s had a winner from his two rides for 13 points level stakes profit and an Impact Value of 3.96.

The Instant Expert report shows that apart from two runners the rest of the field does not appear well suited at all to today’s conditions.

Rock On Dandy is one of the two that does look good, with three sections of green and one of amber. As noted earlier he is six pounds higher than for his last victory, so will need to take a step forward again.

The Pace report shows that prominent runners here over this distance have the best record, but it’s not a huge bias and not something I would be taking too much notice of for this race.

Rock on Dandy will likely be waited with and will hopefully use his obvious stamina to pick them off in the home straight. 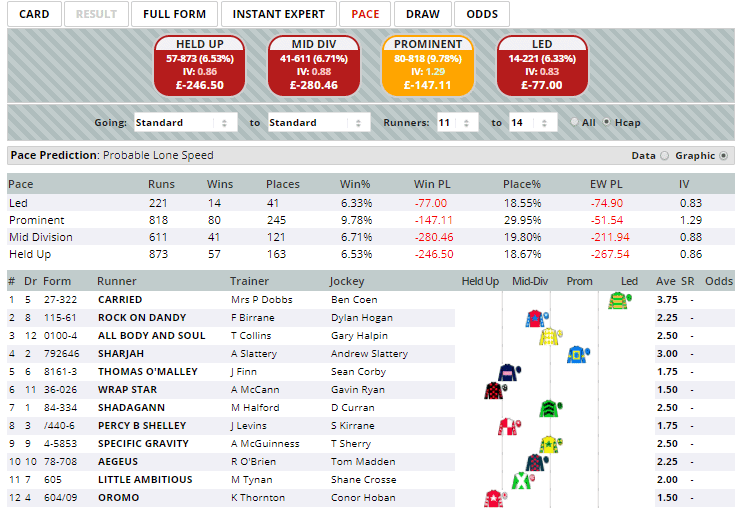